The week has been relatively calm on the financial markets accomplice the massive injection of liquidity from China: as brought by different sources, the Chinese central Bank would have injected around 50 million dollars in the financial (the most important emission from the last January 18th) system. This decision has been taken, , after a bounce of the 4% ‘benchmark on the returns at 10 years for the first time in the last three years" MilanoFinanza writes. Therefore, although the financial markets are beginning to give some worrying signals, the interventions of the central Banks, not only in the East, keep on furnishing a certain calm to the operators: the American lists always travel on the historical maximum and the so-called sell-offs quickly begins to be recovered. The geopolitical situation in MiddleEast and in North Korea seem to be distant, despite the tensions doesn't seem to decrease. Emblematic, to this intention, the price-action of the yellow metal. During the last day of bargaining has been sold futures for a nominal value of 4 million dollars in situation less than 10 minutes: a controversial operation made behind a delicate geopolitics situation as the once that is coming out in the last days.

The intervention of Mario Draghi during the morning of Friday assure more the markets. The number one of the BCE have affirmed that the growth at the European level is solid and constant. Nevertheless, the resumption "it is not able to support by its own." And therefore monetary’ s stimulation still necessary. The governor of the institute has defended the recent politics on the rates of interest, explaining that "if the lower part rates had to have any negative impact on the borders, in, future these consequences would come however largely compensated by the positive effects of the monetary stimulus on the component principals of the profitability, as on the quality of the loans and, therefore, on the billetings for the losses on the loans." Finally Dragons has underlined as the PIL of the Eurozona is uninterruptedly grown for 18 quarters, symptom that operates him of the BCE is beginning to get the auspicious effects.

On the markets the movements, despite has been an increase of the volatility, they have been enough small. The jewels have continued to oscillate in a narrow range struggling to ride the momentum of rising which have begun last week.

Despite last week the gold has succeeded in breaking a trendline bear that projected it in area 1250 $ / oz, the impetus toward the up has been damped. As already said , to bring down the price has been the sell, of Friday, of around 4 million dollars of contracts. Actually the metal is moving in a narrow range (1270. 1290).Still valid the levels of last week. In the target, if the resistance posts around the 1290 $ / oz will be overcome, we find the 1300 dollars and subsequently the 1350. The most important support remains in area 1260-1261 dollars per ounces (average media at 200 days) and before still in area 1267-1270 $ /oz.s The signals, from the markets, are in contrast: although there are some factors that sustain the price(geopolitics uncertainty, uncertainty respect the American fiscal reform) there are some of it that depresses the quotations (see the rise of the rates of interest scheduled in December from the FED). 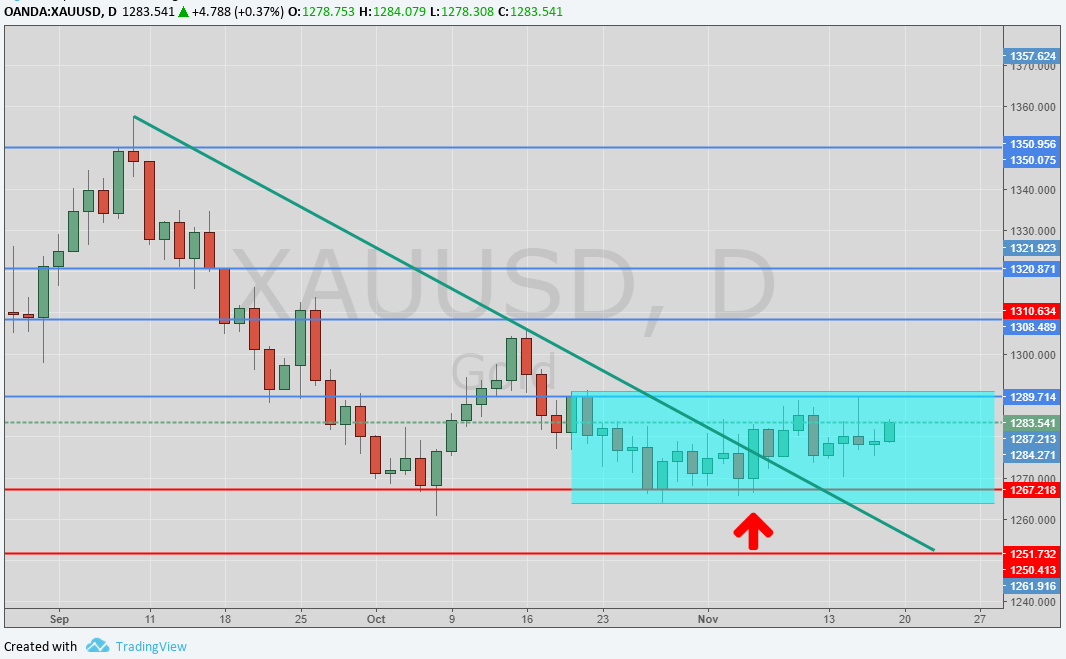 On the magazine the picture still constructive. The trend bear of middle-term seems to have come at the end. The outlook of long period, if the uncertainty on the markets had to continue, it is positive. More uncertain that of brief-middle term. 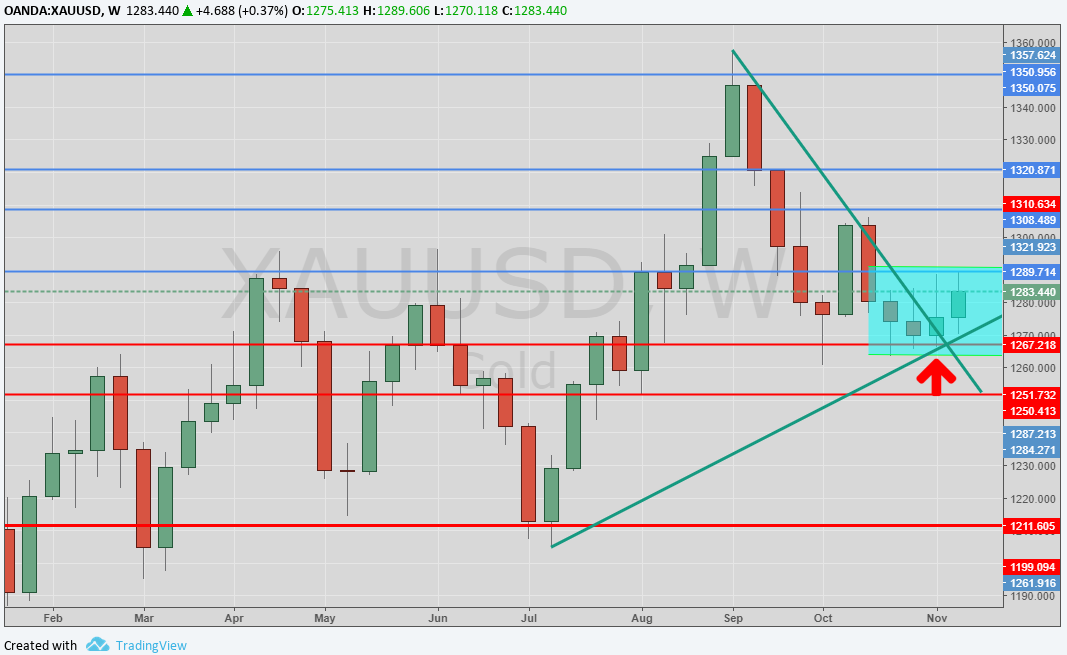 SILVER (XAGUSD)
Relatively flat week also for the silver. The least one in area 16,60 16,80 $ / oz - interpreted by the operators as a "double minimum". continuous to sustain the quotations. The metal, as already underlined the last weekly report, doesn't succeed nevertheless to move from the range of 16,60. 17,20 in which, in the last two months, have moved the quotations. Going bad the fundamental ones: the production is almost at record levels (this year they had predict only inferior levels respect the record of the 2015).Questions in diminution, both for investment, and to industrial level. The resistance most important it still represented from 17,20 $ / oz and it coincides approximately with the mobile average at 200 days. The nearest support is set at 16,80 $ / oz instead and subsequently the minimum at
16,60 $/oz.The outlook is neutral-negative. 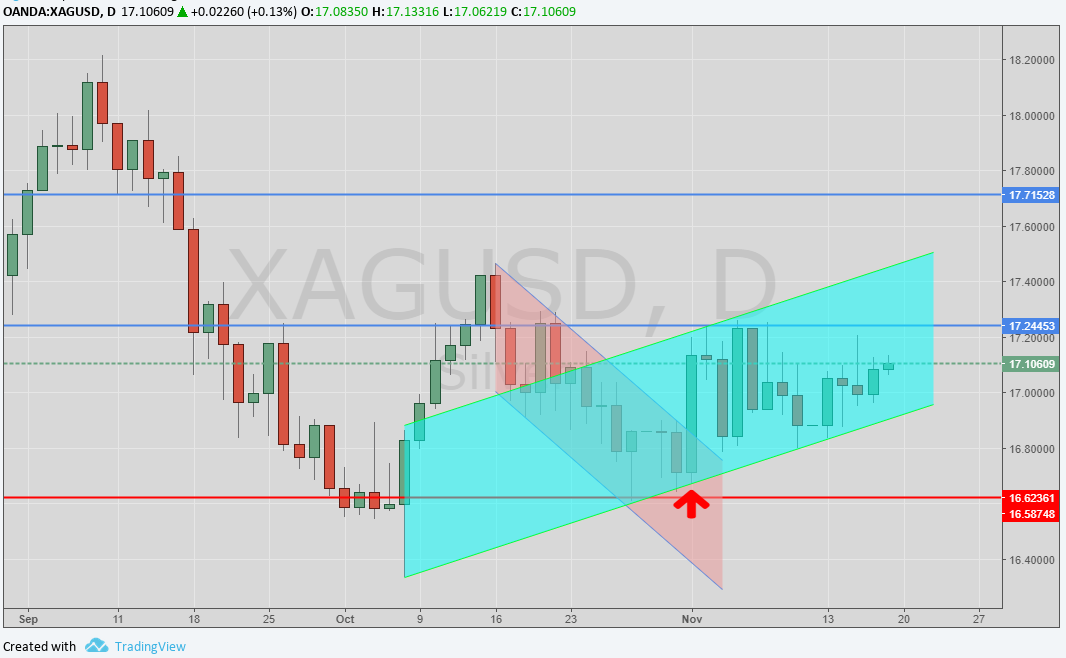 PLATINUM (XPTUSD)
As the other jewels, the platinum still on the levels of last week and work to find impetus. The resistance in area 935 $ / oz, broke in the previous days, keeps on be a great attraction for the quotations. In case of breakup toward the up, the price could aim to a ri-test of the maximum one related to quota 950 $ /oz.s Contrarily, if the trend had to lose strength, the first strong support is set in area 915-916 $ / oz and that following in area 910 $ /oz.s 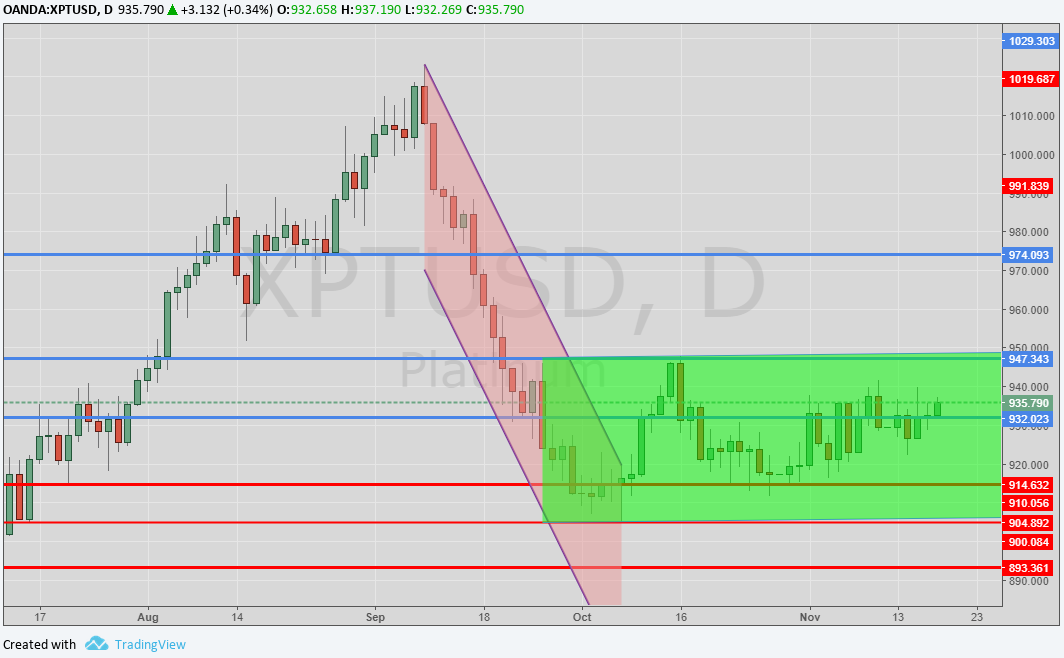 The metal is consolidating around the thousand dollars per ounce. The price has been rejected from the recent maximum in area 1025-1030, following the takings of profit of the operators. The resistance to 1000 dollars becomes now a support. The following one is found in area 997-998 $ / oz and subsequently in area 980 $ /oz.s The outlook keeps on being positive in the brief-middle term. 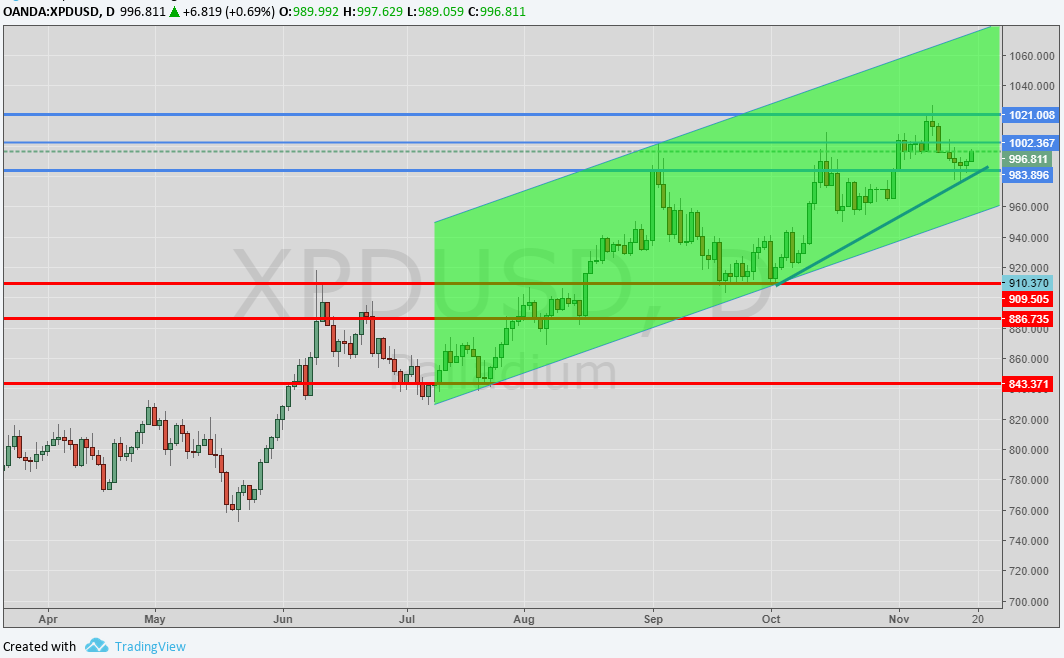 EURODOLLAR (EURUSD)
Second positive week for the currency of the eurozona. The change, now is at quota 1,18, is recovering from the strong losses produced in the previous weeks. The impetus toward the up has been baited by the uncertainty regarding the American fiscal reform and from the closing of positions bears in optics of profit-taking. At the moment the change has punctured to the rise the channel bear in which it was forced from the end of September. beginning of October. Upward, the principal resistances are 1,18, 1,19 and finally the maximum one to 120. 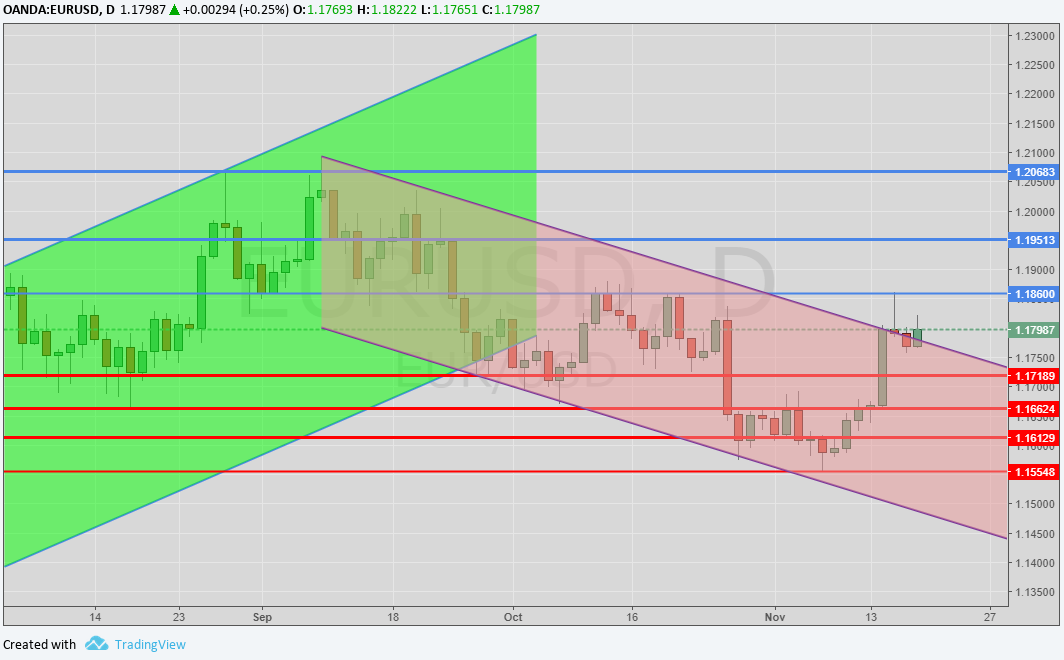