The last week has seen tonic and operating markets incline to the risk. On Thursday, despite the collapse, of the Chinese index Shanghai Composite (worst daily rebate from June 2016) the American and European stock exchange have preferred to ignore the dangers of contagion and continues to put trust in the stock one. This euphoria is partly justified both from the good data of the Euro-zone (Germany above all), and from an easy going of the BCE s partially broken to decisional level. In fact, in the last meeting of Thursday 26th of November have emerged divergent opinions respect the decision of establish a certain date for the end of the Quantitative Easing. In the document issued by the institute located in Frankfurt is possible to read that" A date of conclusion has been seen as a good justification in forecast of further progress toward a sustained adjustment of the process of the inflation, on the base of a phase of growth better than the expectation of decrease risks and on the prosecution of favorable conditions of financing for the real economy" but, it continues affirming that. "some worries have been express about the fact that the nature open of the program of purchase asset can produce expectations of further extensions." Nevertheless, had already been preannounced that the program will continue up to September of the next year, with a rhythm of purchases equal to 30 million of European per month (halved from the previous 60 from January)

Overseas there is a great expectation for the implementation of the fiscal reform desired by the government Trump (possibly within the end of the year): the iter doesn’t proceed so fluently and for this reason the President could be ready to delete from the text the part in which is proposed the partial abrogation of the Obamacare if this can be an obstacle for the final approval. The announcement has been declare from Mick Mulvaney, manager of the office budget of the White House.
In week, despite the weak dollar, the jewels have nearly been unchanged if compared to the levels of the previous week. The European one has earned instead terrestrial against the dollar coming to graze quota 119. we finally remember that in the day of Thursday the American markets have been closed for the celebrations of the thanksgiving.

For the second consecutive week the gold keeps on moving in a narrow range around 10 - 15 dollars. Currently the trend is in a side phase, increasing phase due to the minimum touched by the price that continues to increase. Still valid the levels of last week . In the target, if the resistance overcome it posts around the 1290 $ / oz, we find the 1300 dollars and subsequently the 1350. the most important support remains in area 1265 dollars per ounce (it mediates mobile to 200 days) and before still in area 1270 - 1275 $ /oz.s The price remains also above the average to 100 days (1290 $ / oz). A rebound of the dollar could the reason to depress the quotations, a deleterious factor for the first subjects rated by the green ticket.

On the magazine the picture keeps on being positive. Except for a collapse of the price below the 1270 $ / oz (you see descending trendline). Also the outlook of long period is positive. 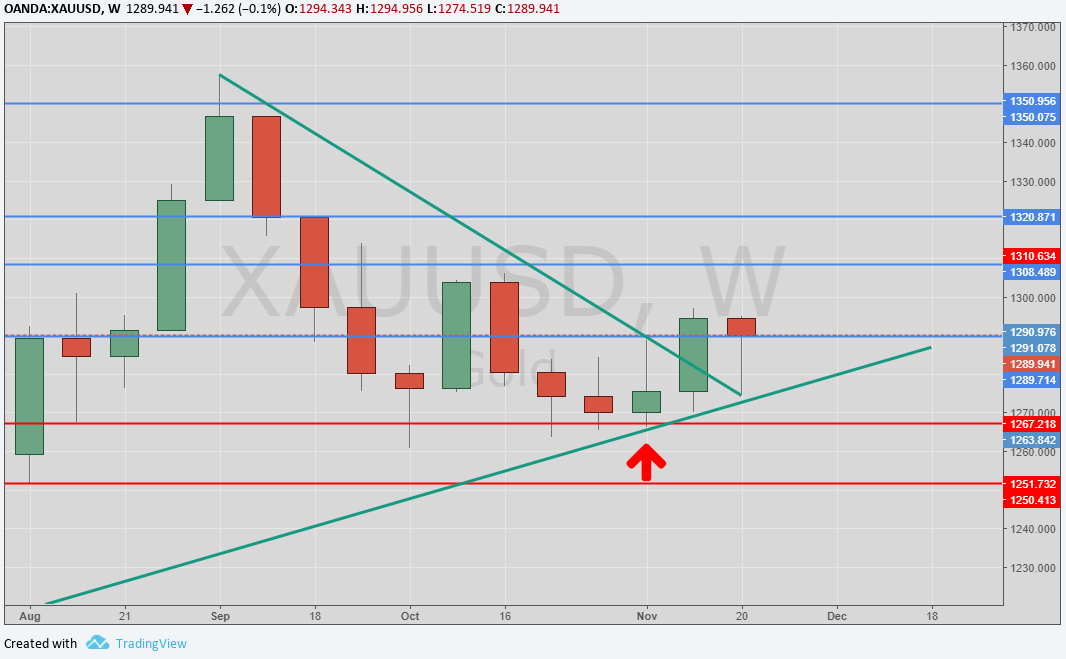 This week the silver has followed the movements of the gold and, as for the yellow metal, the actual phase have to be considered as in increasing phase. The metal, as already underlined in the previous reports, doesn’t be able to get away from the range of 16,60. 17,50 in which, in the last two months, the quotations have oscillated. We remember that from the point of view of the fundamental ones the picture is not optimal: the production is near to the record levels and the question it’s decreasing. The resistance most important it is found at 17,10 $ / oz and it coincides approximately with the mobile average of 200 days (yellow line). Instead the nearest support is set at 17 $ / oz and subsequently at 16,80 $/0z. We finally find the least one related at 16,60 $ /oz.s The outlook is neutral-negative. 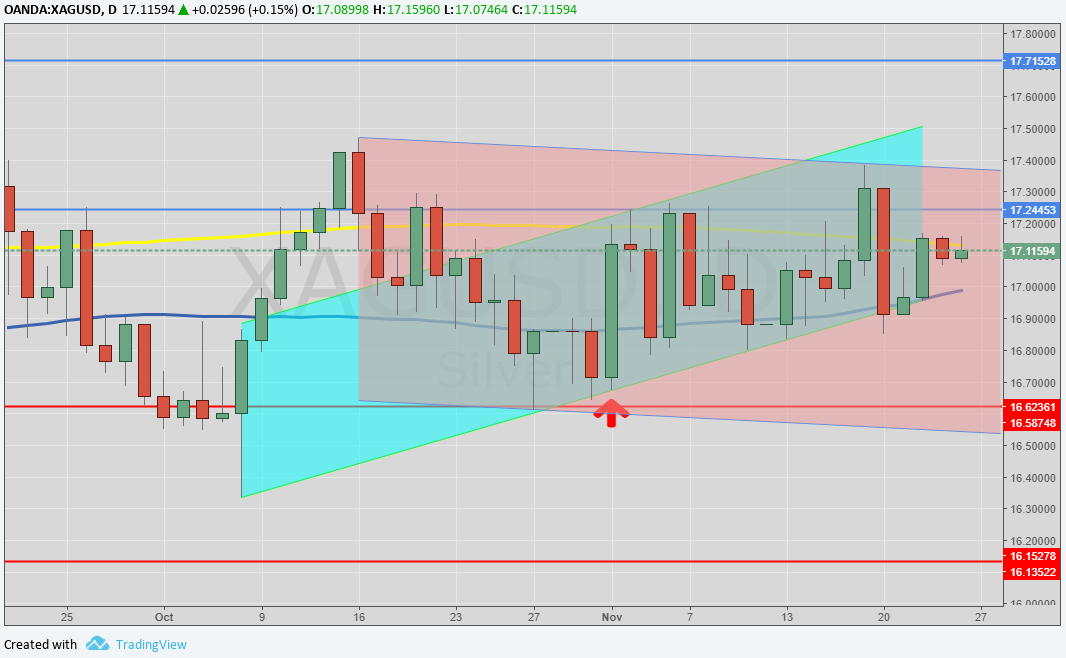 The metal, after having tried to effect a rush above quota 950 $ / oz it has been violently rejected toward the low leaving almost on the ground 30 dollars. Currently in area 950 $ we find both the mobile average at 100 days and that the once at 200. The trend is in a higher phase although also in this case the phase is almost on the side. Toward the low the first strong support is set in area 920 $ / oz and subsequently in area 915-916 $ /oz.s We finally find the relative minimum in area 904 - 910 $ /oz.s 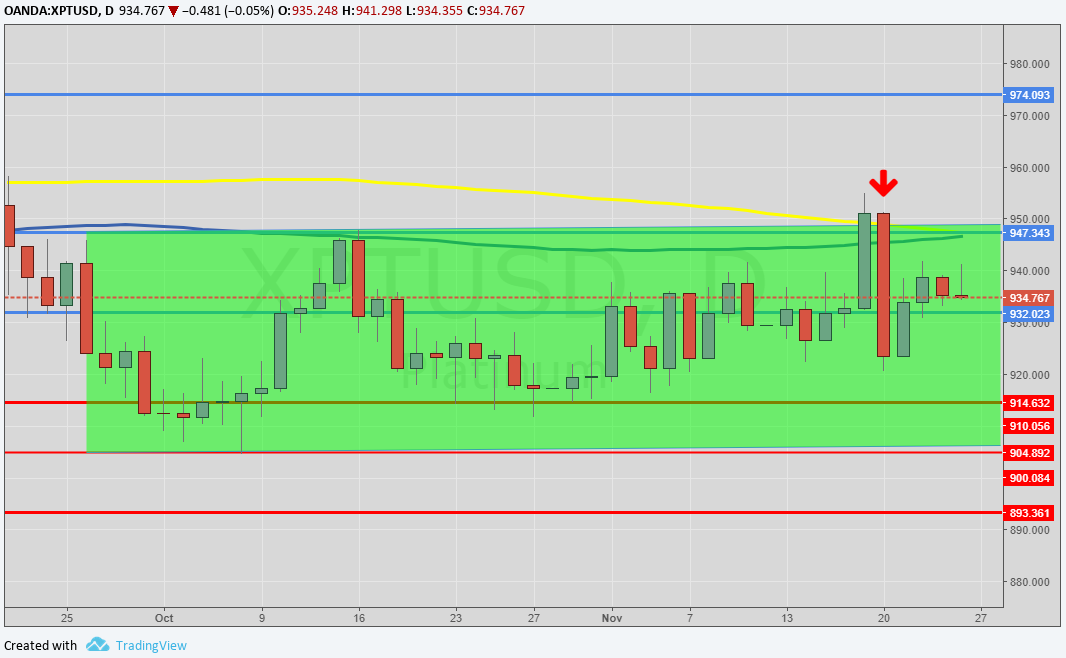 The metal keeps on maintaining its status above the 1000 dollars per ounces. In the previous week the price has been rejected from the recent maximum in area 1025-1030 but the buyers seem to not want to leave and their aim are new records. The resistance at 1000 dollars (but in general in the area around the 980) is now become a solid support. The following one is found in area 997-998 $ / oz and subsequently in area 980 $ /oz.s The outlook keeps on being positive in the brief-middle term and the price remains above both the mobile averages (100 and 200 days) 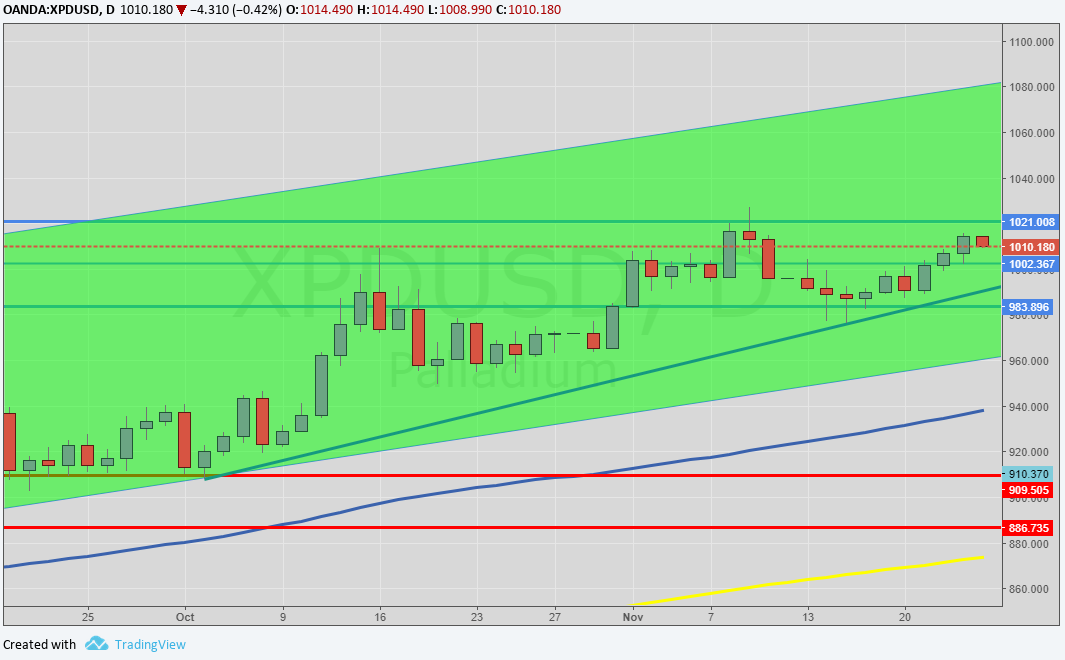 EURODOLLARO (EURUSD)
Third consecutive week for the earnings of the currency of the eurozona. The change, after a test in area 1,1720, have broadly recovered the descent and it firmly travel above area 1,1750. 11800. The cue of the growing trend as often happens, has been set off by the weakness of the dollar since the same dynamics is nearly verified with all the changes of the green ticket as counterpart. Toward to the high , the principal resistances are 1,19 and finally the maximum one at 1,20. 1207. 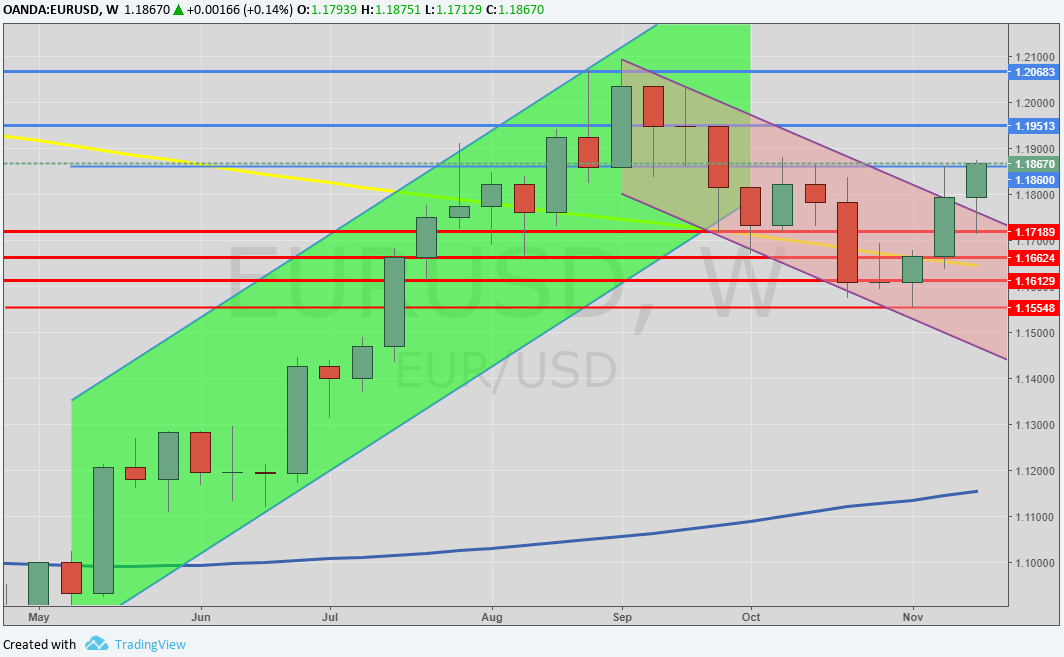 Italpreziosi S.p.a. does not guarantee any results related to the information, publications made and present in the news, or assumes no responsibility for the outcome of any financial transactions performed by you. You expressly agree to understand that access to information on the site does not represent a solicitation to buy or sell financial products and that any resulting operational decisions are taken in full autonomy and at your sole risk. By virtue of these terms of use no liability can be incurred by Italpreziosi S.p.a. for losses, damages or missing and / or minor gains that the reader would suffer as a result of executing transactions based on newsreading.