Also the second week 2018 it seems to be euphoric. The rally on the stock lists doesn't mention to lose strength, accomplice the weakness of the dollar that travels on the minimum of the period in comparison with the Japanese yen and the euro. The euro has earned further ground towards the green ticket following the minute of the BCE published on Thursday having as an object the themes discussed in the last meeting of December by the Board. Such publication has surprised the markets cause it came out among the members of the Board ,the wish to analyze for the second time the so-called forward guidance: although the statement has been vague and generic the operators have interpreted the message translating it in a less expansive monetary politics of that adopted till now. The institute placed in Frankfurt has confirmed an exit strategy from the QE very gradual, reassuring once more the markets. Always on Thursday has took place the discourse of the Fed’s president of New York ,Bill Dudley. The number one of the most important American bank have underlined the risks of a possible overheating of the American economy for next years and have sustained the necessity to proceed with the rises of the rates, even though. almost useless to specify it – in a gradual way. Dudley is worried for the actual evaluations of the stock assets, that described as "elevated." Nevertheless the president wanted to reassure the operators and has added that, unlike the last financial crisis, a meaning correction to the rebate would not have the devastating effects that it had in the last years. The lists have taken the opportunity to squirt toward new records despite the strong level of iper-bought (RSI) that in some cases (you see Dow Jones) has reached the same levels as the previous in the 1929. Seems totally vanish the admonishments around the necessity, from the FED, "to press the brake" with more vigor: the dollar, instead of getting stronger, has been object of important sales. The European lists have been penalized therefore by the exuberance of the unique coin that currently travels at quota 1,21 on the dollar: a record since 4 years till now.

During the morning of Friday press agencies has been reached from the news that the accords for a government of coalition in Germany will begin. Paradoxically to celebrate have been once more the American lists because the strongest reaction, at the European level, has some influences on the euro, in further strengthening towards the dollar. Good performance for the yen and the precious despite the good macroeconomic and political data they keep on marking rises on rises.

The persistent weakness of the dollar (with a next Dollar Index to the minimum ones of September) pushes to the rise for the third consecutive week the quotations of the gold. The yellow metal is very close to the levels pre - Americans election when, on the wake of the nervousness waiting for the results, had touched a peak of 1357,45 dollars per ounce. The rally of the last 10 days involves the whole compartment of the first subjects, in particular oil and gas (two commodity particularly tied up to the price of the metals being the energetic component a big slice of expense for the mining extraction). The resistances upward stay the same of last week, or rather: area 1330 $ / oz and subsequently the area between the 1350 and the 1360 $ /oz.s The supports are located in area instead 1290-1300 $ / oz and subsequently to 1250 $ /oz.s 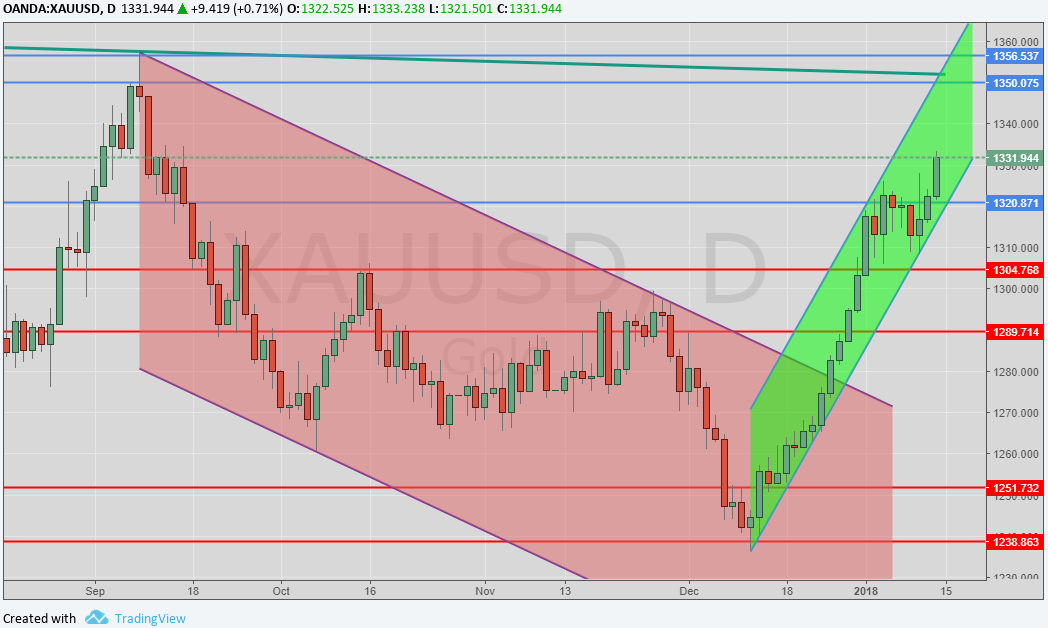 On the weekly graph the general picture denotes a great strength and is going to reach the descending trendline (green line, around 1355 $ / oz) already underlined in the last weeks. This last one represents a strong obstacle to overcome and will be necessary strong drivers toward the up so that the metal overcomes with decision such barrier. In this moment, nevertheless, they don't seem to be on the horizon particular "trigger" such to bait further rally. 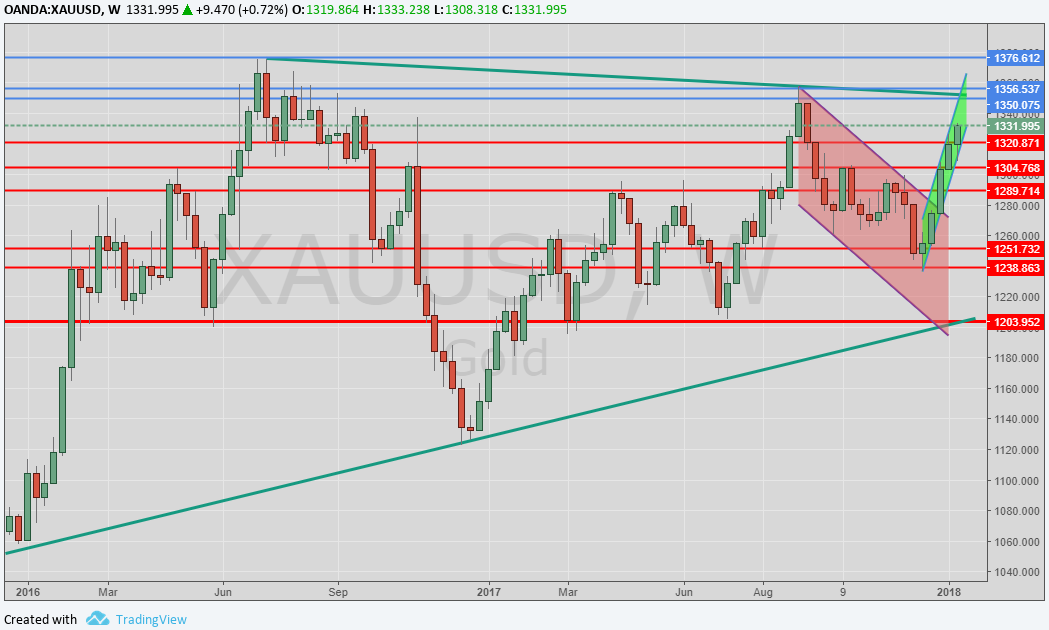 Although with less vigor the silver follows the gold. The channel in which the price has been being trapped for months (15 dollars in low and 17 toward the up) would seem to be enough resistant that has not offered any sprout neither upward neither downward. Nevertheless we have noticed that the metal has gone out with a certain strength from the bear channel and has tasted (red line) trendline that held the quotations under pressure since last June. The outlook keeps on being moderately positive although, as for the gold, the absence of strong drivers toward to the up could make the recent push upward more weak. 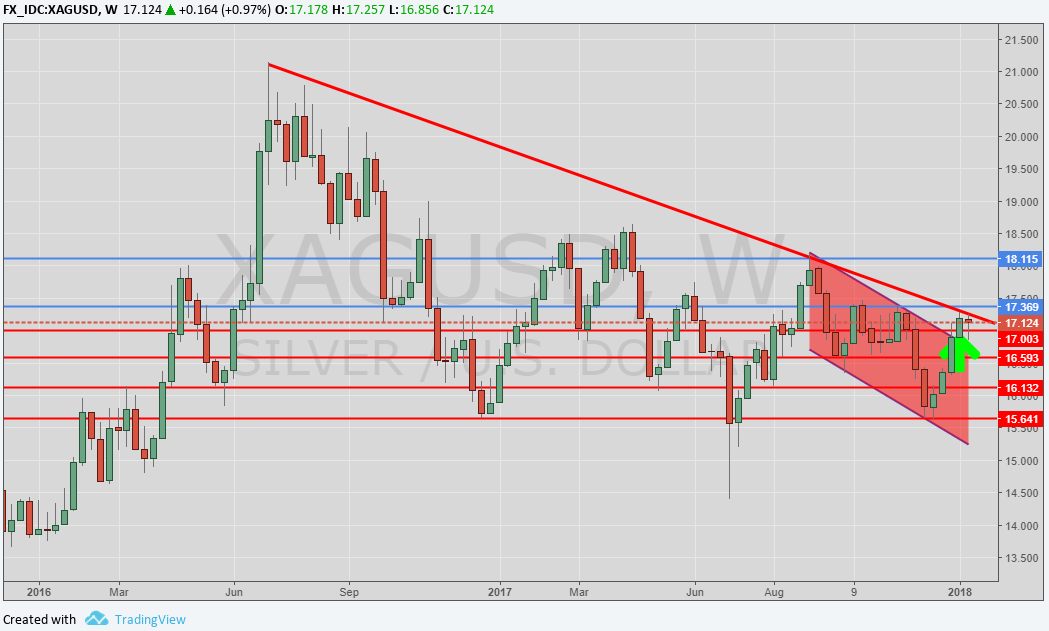 Fifth consecutive week of earnings for the platinum that little by little makes the distances with the palladium less important, earning around 100 dollars per ounces in few more than one month. The metal, that oscillates in the day of Friday under the 1000 $ / oz, seems to definitely have marked the least ones of period at 890 $ /oz.s The picture is very positive now, especially for the macroeconomic data coming from the East: if in fact if the China nearly foresees an identical consumption to that of 2017 (- 3% on the 2016), India esteems a 20% growth of the question in comparison with the last year. Fundamental will be the data on the auto sector. If it is true that platinum and palladium can be for some interchangeable verses in the construction of catalysts, it is also true that such changes will request a lot of time , especially concerning bureaucratic procedure and the approval of the new constructive standards. 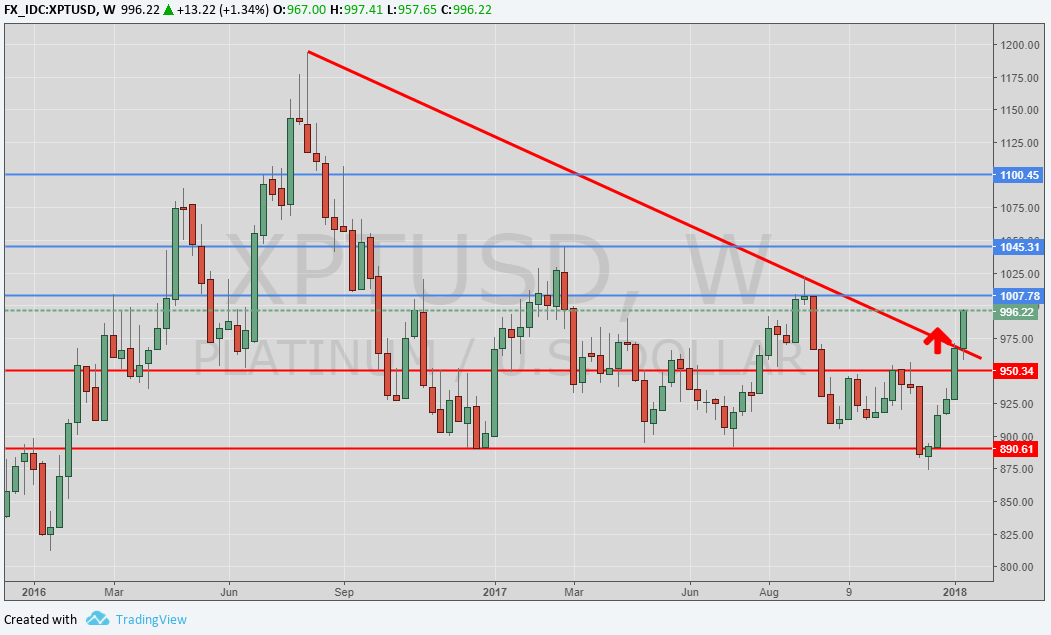 During the week after having touched the 1120 dollars per ounces the palladium takes breath. The price of the metal is at record levels (having also earned a 55% in the 2017) pushed by a strong and persistent question. As already said, to sustain the quotations they have been and they are still the fundamental ones: the last data on the registrations of auto-concerning the American and European markets, as well as Chinese - they have been very positive (BMW has made to record a record of sales in 2017 and FCA greets the 2018 announcing investments in USA for over 1 million dollars). To notice as in the only month of December 2017 the stock of palladium in the stores observed from the NYMEX is lowered of an impressive 20%, index of very strong consumptions. If the unbalanced asks.-offered will persist also in the 2018 will be not to exclude other records. 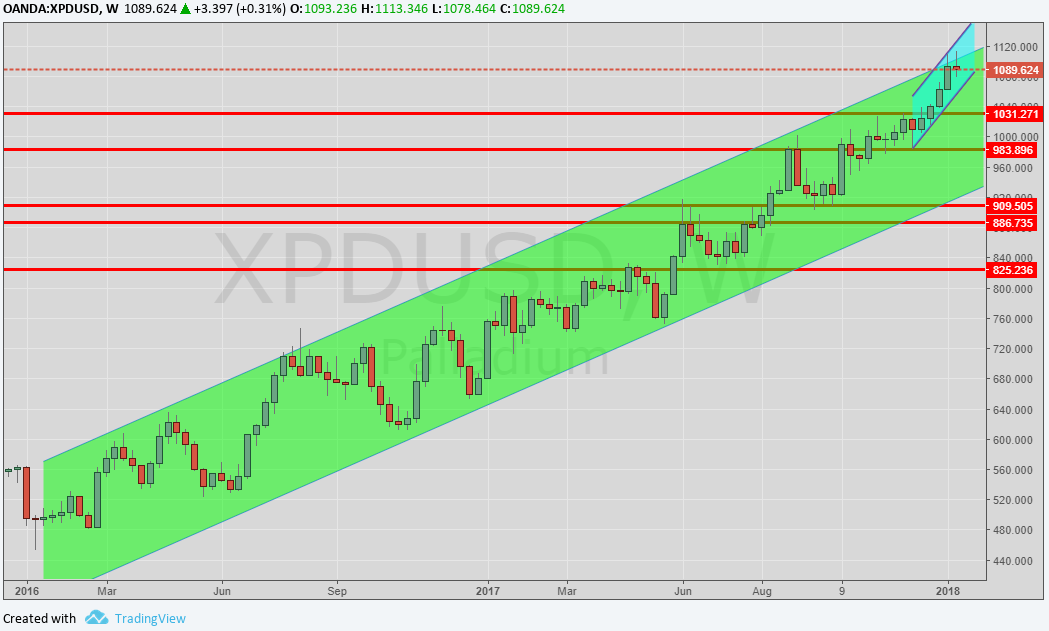 The unique coin to gain ground instead of the dollar and run toward new records. To sustain the the change have been the minute issued on Thursdays from the BCE (that from the operators have been red as going toward the up) before and subsequently the resolution in the German politics where the jobs for the making of the new government have started officially. In this moment, the attitude of waiting and uncertain attitude of the FED around the next rises of the rates it doesn't convince the markets that keep on preferring the European one instead the dollar. 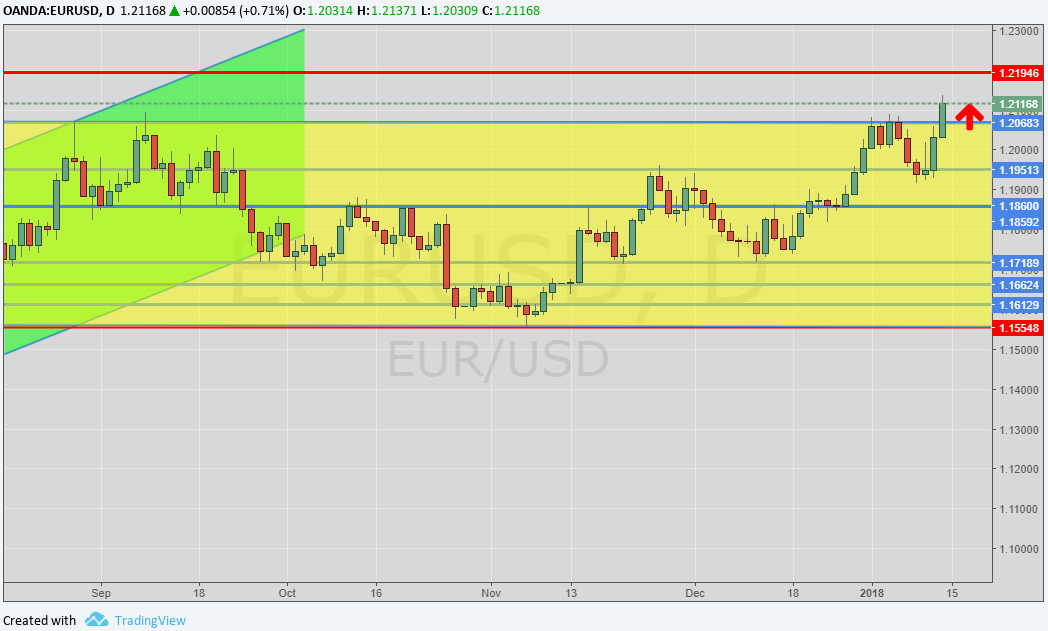