The first week of bargainings of the new year has surprised for the exuberance with which the principal world stock lists have achieve new records (Dow Jones above the 25.000 points and S&P500 above the 2700). In fact the excitement for the Trump’s fiscal reform doesn't mention to calm down, accomplices the macro positive data and a moderate level of inflation, both in the United States and in Europe. According to the analysts the Old Continent would definitely had left the crisis beyond its shoulder and it’s very close to enter in a favorable cycle under different points of view (more solid growth of the expectation, easy-going monetary politics still and an inflation that doesn't seem to scare)During the week, the good data on the American market job (they have beaten the possible results of the economists) have contributed to furnish further fuel to the rush toward to the up. At the geopolitics level the tensions in Medioriente (Iran first of all) and in the East (Korea of the North) are always at a warning levels, the operators now prefer to be optimist snobbing the potential conflicts that could blaze from a moment to the other. Also at the political level the history is the same: Spain keeps on not having a government, the same Germany, and Italy starts on thinking about the elections of March. But all of this seems not to worry the markets (excellent the recent performances of the Spanish IBEX35, of the of the German DAX and of the home FTSEMIB).

Also for what its concerns the jewels the atmosphere is a positive atmosphere : gold, silver, platinum and palladium have vigorously bounced from the recent minimal (especially ) helped by the weakness of the American dollar. In fact, despite the FED during the week has confirmed that the majority of the board is favorable at 3-4 rises of the rates during 2018, the green ticket has not profited from it but has lost rather terrestrial towards the principal currencies.

The Euro one, that could theoretically lost point for the above-mentioned political situation, keeps on showing a strength and is going to prepare itself to make on testing new maximum of period. Without any doubt I’s a particular historical period: the heavy interventions of the central banks have changed the markets (above all the bonds markets) injecting millions of liquidity. Will the central institutes know to remove the foot from the accelerator without provoking a strong backlash? In this moment the stock exchange bet that yes, it is possible, but it we have to remember that the changes of direction often happen without any type of warning.

Accomplice a particularly weak dollar, the quotations of the gold have almost reached the levels pre-Trump (or rather 1350 $ / oz; currently the metal travels under the thirty dollars). The rally of the last days is like a record and concerns the whole behavior of the raw materials: from the announcement of the FED of December around the rise of the rates the Bloomberg Commodity Index has gained nonstop rises for 14 consecutive days (an event never happened before now). As we can see from the graphic below the metal has reached with a strong decision well to see from the underlying graph, the metal has punctured with decision the descending channel that held the quotations under pressure. Now the next obstacles, if the run had to continues, they are found in area 1330 $ / oz and subsequently at 1350-1360 $ /oz.s The supports are in area 1290-1300 $ / oz a 1250 $/oz. 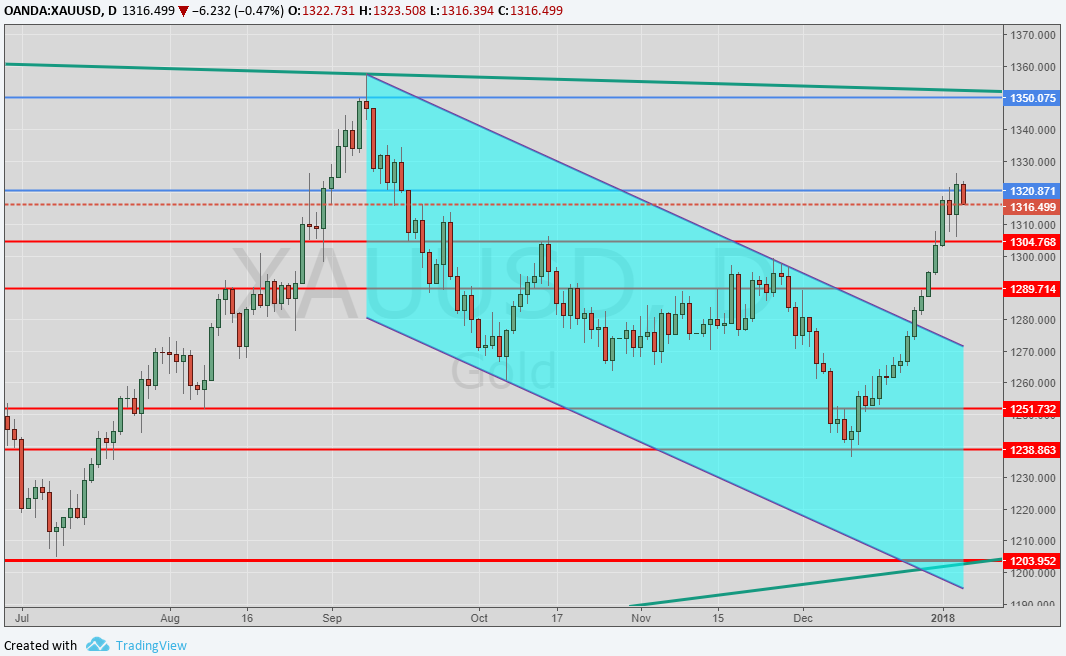 Also on the weekly graph the general picture keeps on being substantially positive. The descending tren line (green line, at around 1355 $ / oz) t could rejected the price. Only if will be broken with decision the metal could try to break down new records of rising. 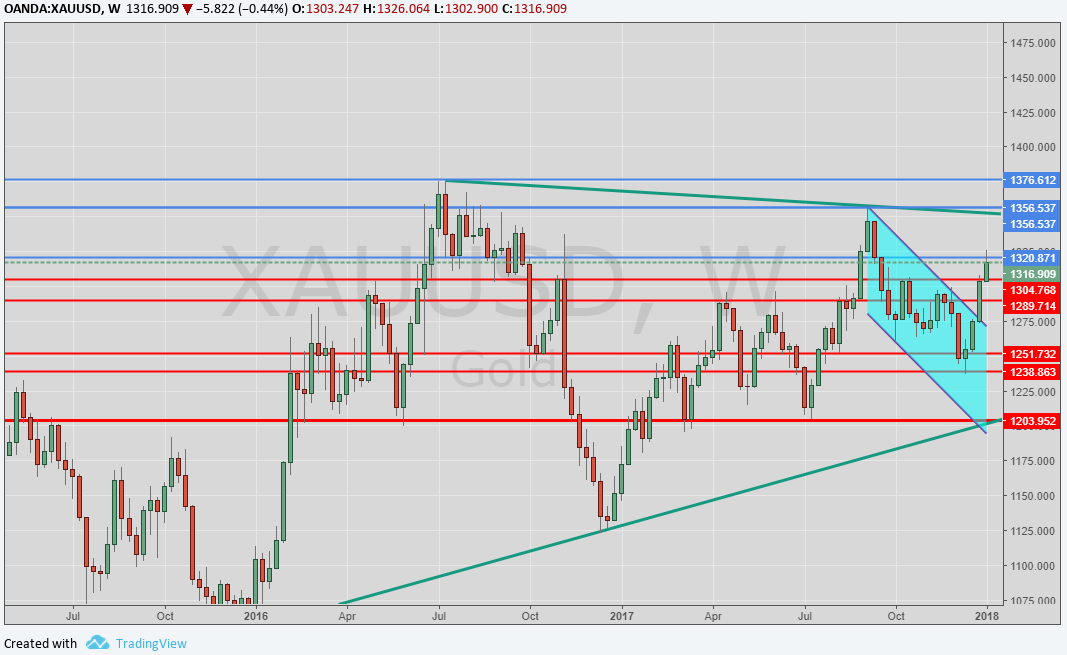 The silver as the gold, keeps on rebounding started from the least one at 15,60 $ / oz and now, after a first attempt of breakdown which has failed , has succeeded in breaking down the channel bear in which was forced from the end of September-beginning of October 2017. The zone around which the price gravities is almost difficult and you/he/she could represent a big obstacle to overcome for further rises. The outlook is moderately positive. Toward to the down we found the 17 dollars as first support and subsequently the 16,50. 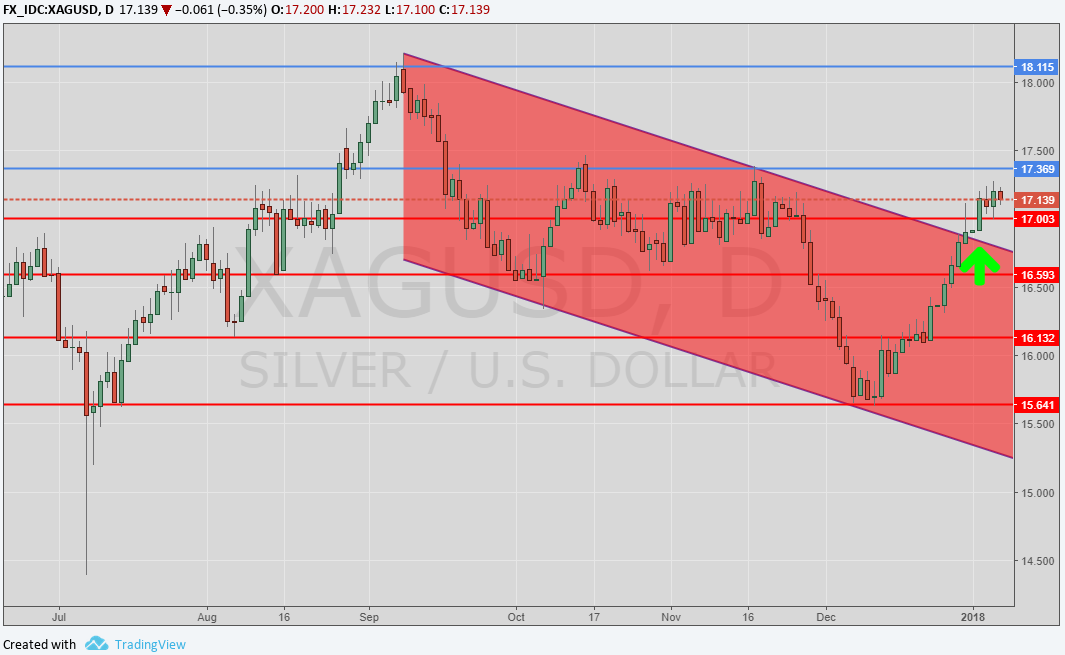 Other week of earnings for the platinum that has broken with decision the trendline bear ( see the red line). The metal, that currently travels around the 970 dollars per ounces, it has moved to the superior extreme of the channel which has been formed from the recent minimal. The picture is, without any doubt better, nevertheless the area 970. 990 could represent a strong resistance. The outlook is neutral. To maintain under control (as for the palladium) the course of the cars sectors (one of the principal buyers of the metal). 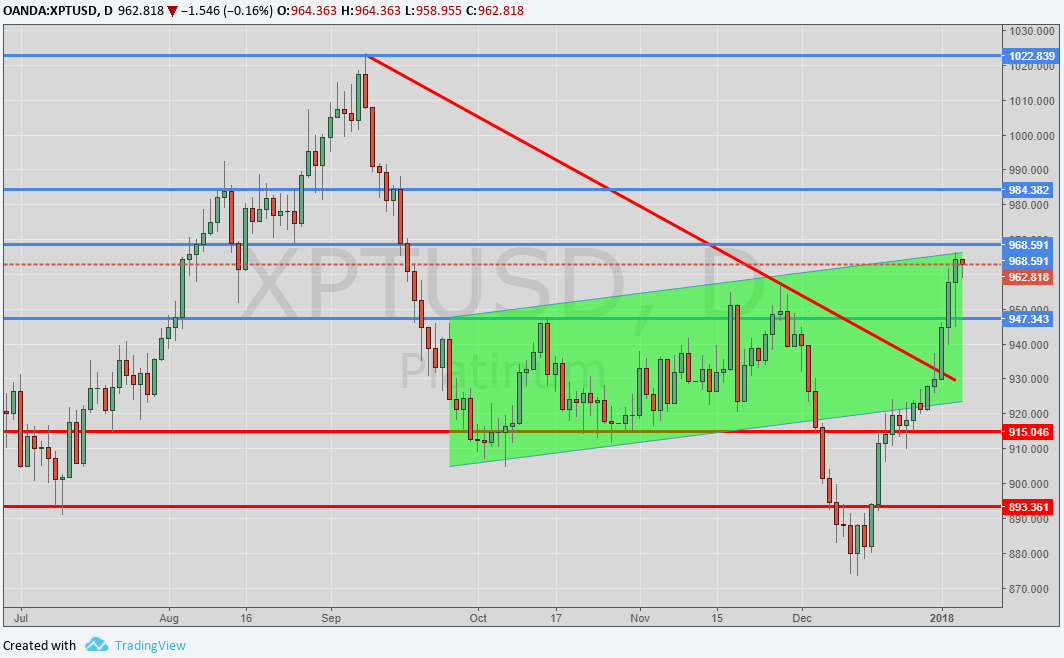 It doesn't mention to stop the ascent of the palladium that was celebrated in 2018 with strong earningses. To furnish a further push to the quotations have been the recent data on the registrations of auto both for what it concerning the American market and European one. The ones that seemed as a wall (the threshold of the 1000 dollars per ounces) now acts as a support. To notice the strength of the "bulls": the price is pushing toward the extreme of the channel toward the up that persists from practically 2 years. We still confirm as has been fundamental to push the quotations toward the up during the 2017: the question has systematically overcome the offer. If the actual situation had to remain unchanged are not unlikely further increasing of the price during the 2018.

Also the Euro keeps on running and it brings itself to the maximum extreme of the side channel that as a base has 1,15 and as a ceiling 1,20. The trend (despite the monetary politics of the BCE is still easy-going unlike the one of the FED) is positive (at least from the technical point of view). Decisive it will be the behavior of the change in the next days: the breakup of the actual level could bait further rises with a target next to 125. Supports and resistances are visible on the graph. 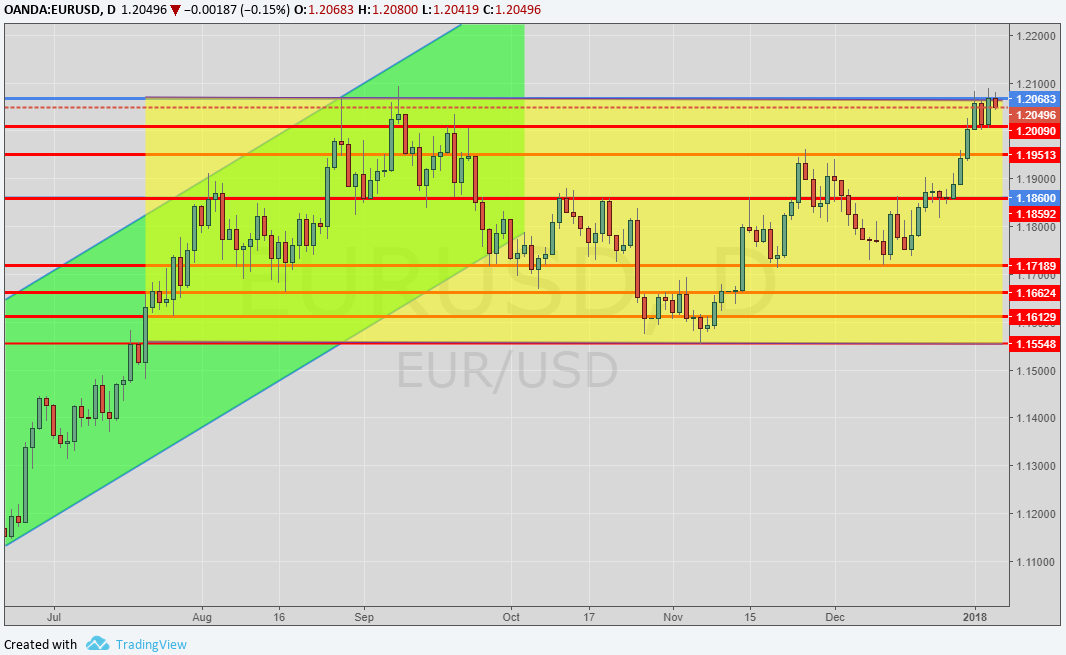