The last week of the year has been characterized by few exchanges, accomplice the economic and political appointments of a certain relief. The stock markets have continued the climbing with a slow but constant footstep, due to a weak dollar that has seen the last days of 2017as the worst ones, already by itself negative (the Dollar Index is prepared in fact to close the first year in red from 2012 with a -9%, bringing great benefits to the exporting company). The decrease of the green ticket towards the other currencies is concerning with the closing of positions toward the up activated by the end of the effect "fiscal reform" already filed to the past. Nevertheless, as already said, the performances of the various world indexes have literally been exuberant: the MSCI World Equity Index (which is composed from around 1620 titles to a global level) is preparing to close the 13° month of consecutive earnings, at the maximum historical (+22% in comparison to the 2016). The s & P500 closes to a handful of stung by the 2700 and the European stock compartment it has by now practically made to have been marking the best performance from 4 years to this part. Excellent earnings also for the oriental stock exchange and the emergent markets. 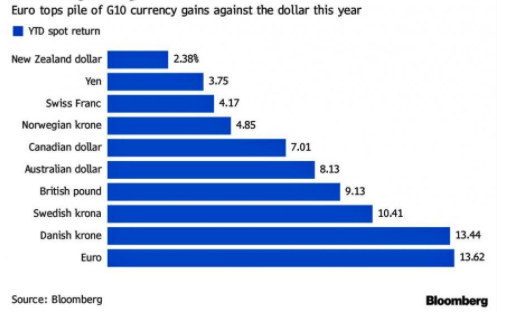 The weakness of the dollar has also favored, especially in the last part of the year, all the raw material and in particularly the precious metals: the gold has come to touch the 1300 dollars per ounces while the silver is to a puff from the 17 $ /oz.s Excellent the performance of the palladium that has continued the rally up to the last days of bargaining: the metal has broken down the wall of the 1050 dollars per ounces arriving to a maximum of 1063. Also the platinum has recovered in good part the descent of the first 3 weeks of December bringing itself above the 900 dollars per ounces. Nevertheless continuous to be wide the differential one with the palladium (around 150 $/oz).

The euro, despite an enough turbulent year from the political side(elections in France, Austria and Germany, as well as Catalan crisis), has experimented the best performance towards the dollar from 14 years to this part, earning a +13,6% on the green ticket. .

The last three weeks of December have been characterized by a big recovery from the yellow metal that is going to close the last day of bargaining at the 1300 dollars per ounces. Accomplices, as already mentioned, both the weakness of the dollar and the rebalancing of the wallets of the funds of investment already projected for the year 2018. We can notice as the price has been broken toward the channel bear that has as apex at 1350 dollars per ounces (coincident with the elections of Donald Trump). Toward the downward the first important support is in the area 1250 $ / oz that follows the one which include the 1270 and the 1280 dollars per ounces . Upward we find the 1300 and subsequently the 1320-1330 $ /oz.s 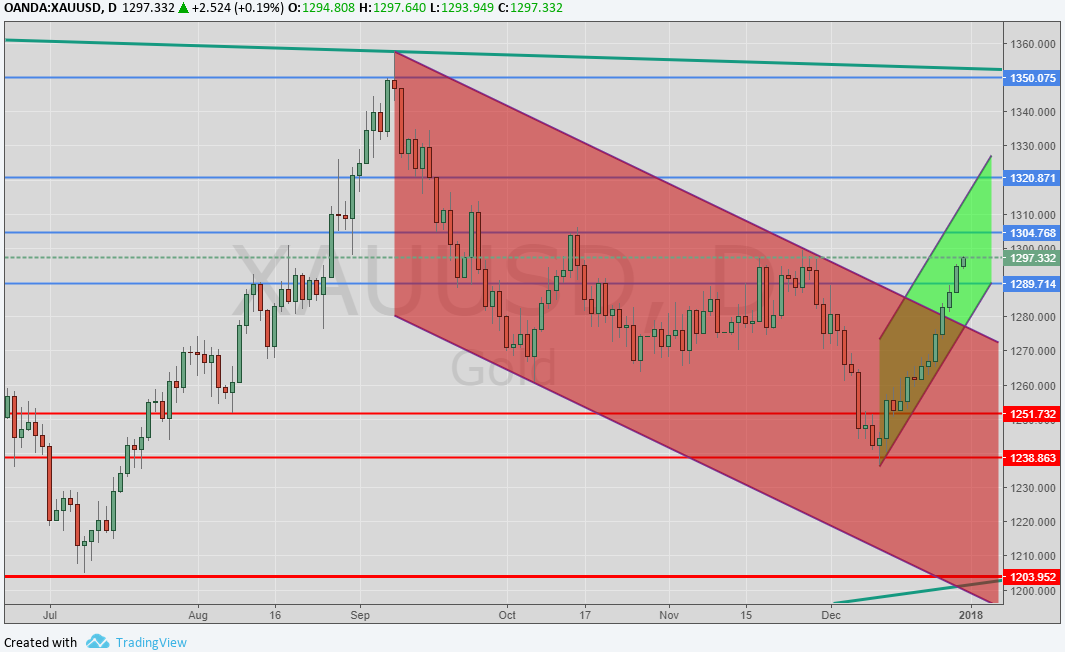 On the weekly graph the general picture keeps on being substantially unchanged but moderately positive. The ascending trendline that sustains the price (you see graphic underlying) is well distant from the actual levels: we confirm therefore that only a descent under the 1200 dollars per ounces could represent a strong signal bear. The outlook of the long period therefore it is positive. To contribute to the upward push could be (after the Spanish elections) the Italian elections, that will be held in March 2018. 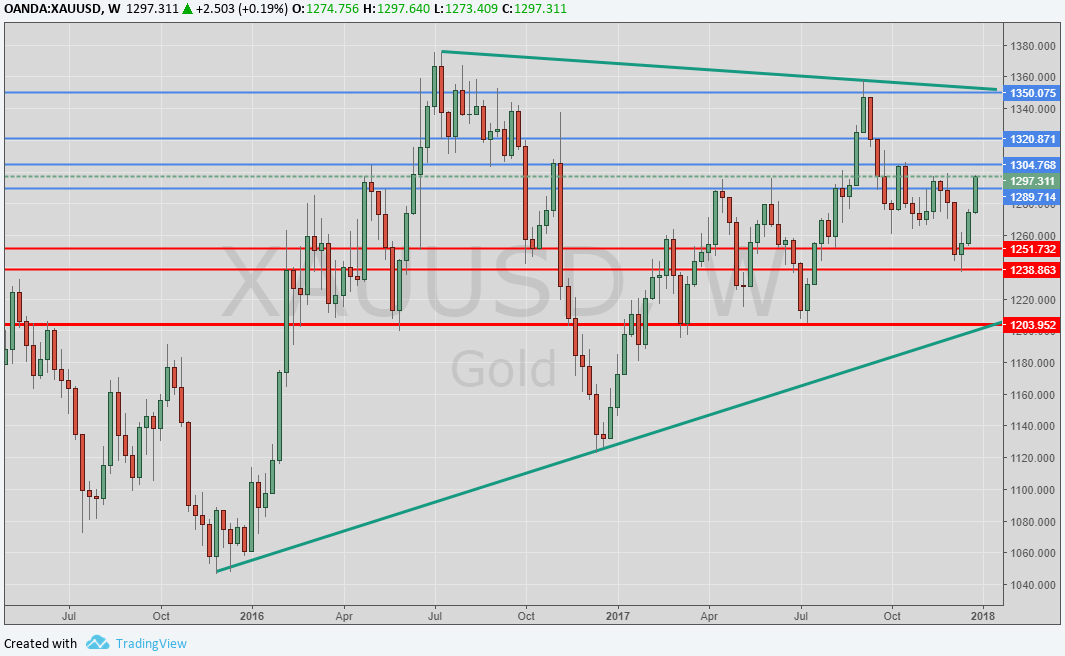 The silver as the gold, has continued the rebound departed by the least one at 15,60 $ / oz and it has been located toward the up on the side bear (you see graphic underlying) to the tallest part of the channel without nevertheless succeeded in breaking it upward. The price of the metal seems nevertheless to aim to a test of the 17 dollars: in case in which such test had to be successful, then the second great obstacle is found at 17,30. 17,50 $ /oz.s Downward we find the 16,60 and subsequently the least one to 15,50. 15,60 $. The outlook, if the fundamental continues to still unchanged, it is neutral 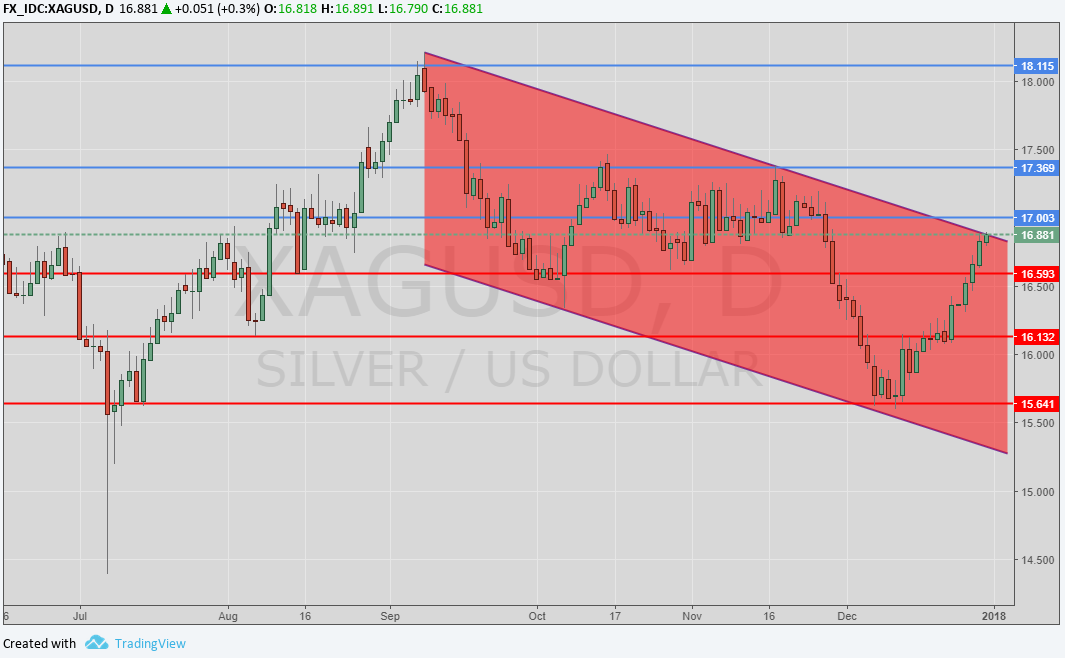 Also the platinum as the gold and the silver, have broadly experimented a positive week. Following the strong sales that had put under pressure the price of the metal making him touch new annual minima, the quotations they are firmly brought above the psychological threshold of the 900 dollars the ounce. The picture is improved but only with a definite breakup of the trendline bear (you see graphic underlying) would be had a signal of purchase. Insofar, as already mentioned in the preceding report, it would serve a rush above the 950 $ / oz to do yes that the movement rialzista consolidates him. The outlook is neutral. 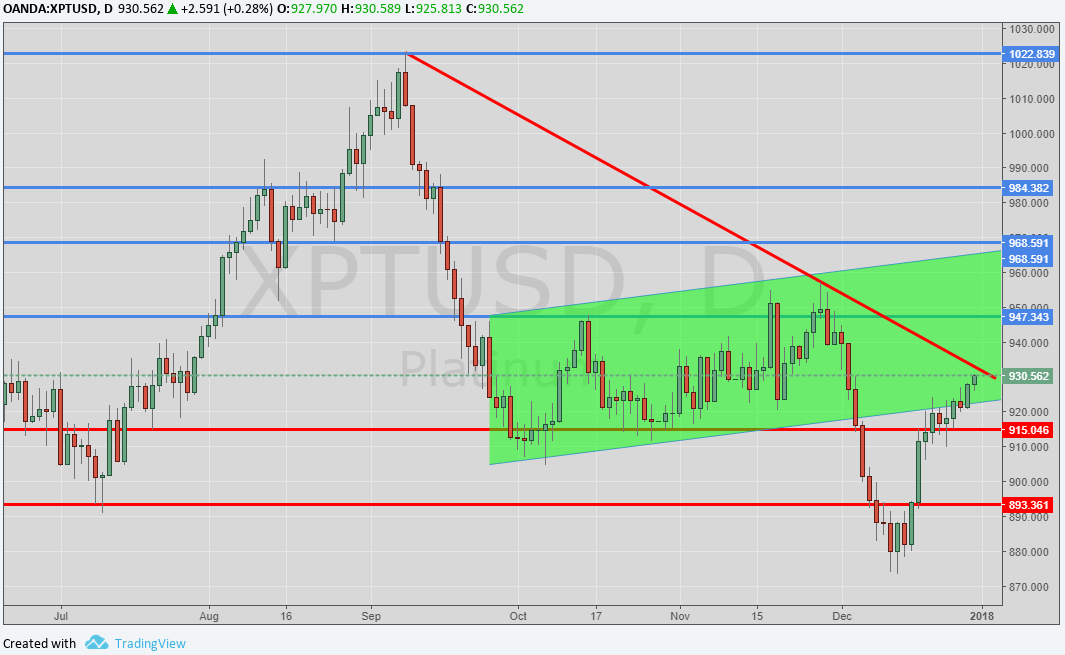 Unstoppable the palladium. Despite this is the last week of the stock-exchange year, the metal continues to be object of strong purchases despite the price travel above quota 1000 dollars per. We confirm once more that has been the fundamental ones to push upward the quotations: during all the 2017 the question of palladium (kind that coming from the auto sector) has overcome the offer. At the moment the once that was a strong resistance (or rather the 1000 dollars) has become a support. If the quotations had to correct (exactly for the closing of speculative positions from funds) we have the 1030 $ / oz (previous resistance) before and subsequently the 1000 - 980 $ /oz.s The outlook is still positive. 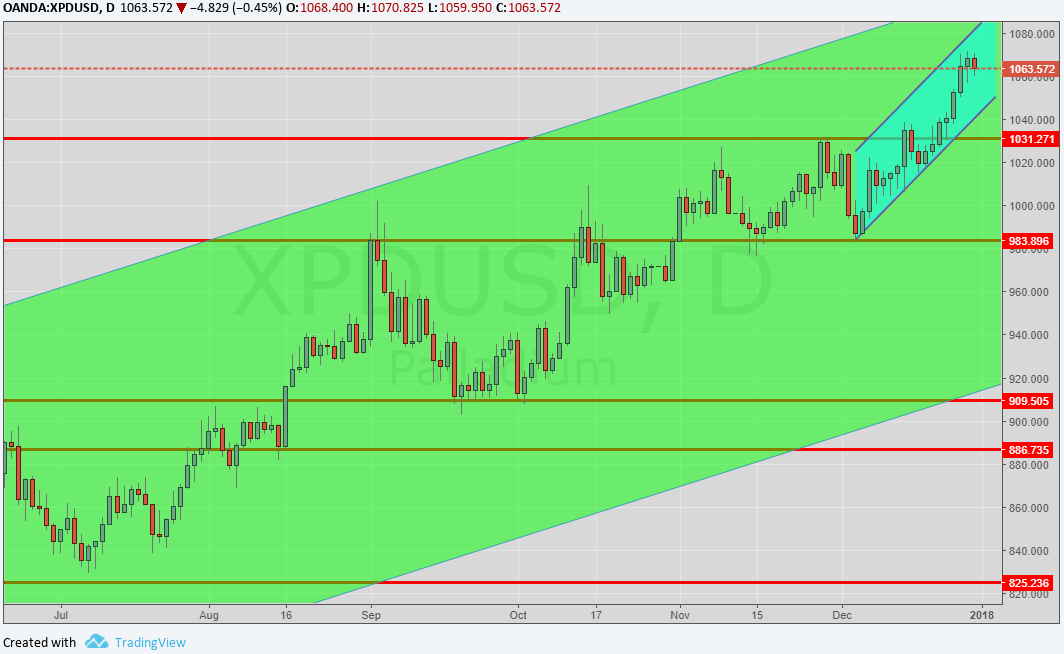 Record year from the currency of the eurozona. The change closes the year next to the 1,20 proximity towards the green ticket. Practically deny all the forecasts of the analysts that gave by now for sure the parity with the dollar. The trend is undoubtedly positive (the change has touched once only the 1,15 following the peak to 121. The range continues nevertheless to remain at 1,15. 120. If this last one will overcome toward the rise or to the toward the down, it is not to exclude a strong movement of around 10 cents. Supports and resistances are visible on the graph 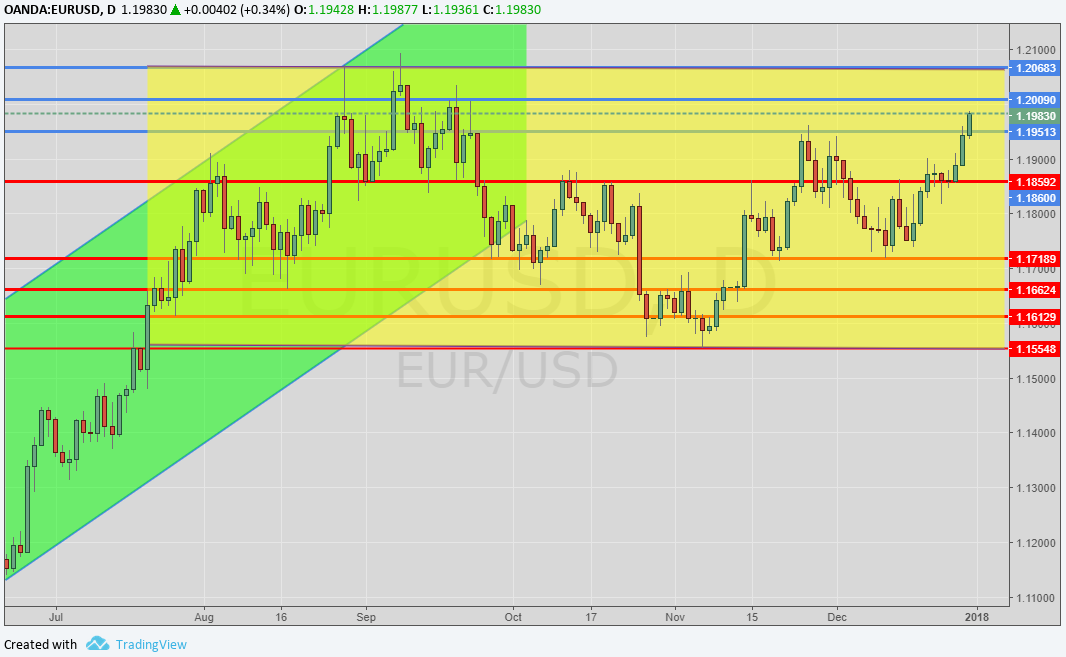