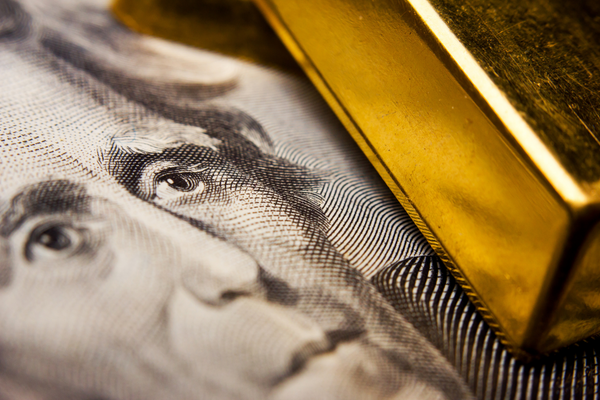 Last week, the yellow metal traded higher on Tuesday 25th and then eased again on Thursday 27th October, when spot XAU gold fell 0.2% in particular to position itself at $ 1,661.63 an ounce. .

Let's analyze the dynamics behind these oscillations together.

According to Saxo analysts, the initial rise would have been determined by the sudden decline in US house prices (which collapsed on Tuesday 25 the most since 2009): this would have triggered a spread of distrust among US consumers, who would have moved by allocating resources towards the metal. yellow.

At the same time, there has been a collapse in US bond yields and the dollar, with the euro regaining ground among other things, reaching parity with the green sheet (the Community currency has reached its peak since September, touching $ 1.00935 to then settle on Friday 28 at $ 1.0067, a slight decrease then, but still at parity with the dollar).

After falling to its low for the month, on Thursday 27 the dollar then returned to rise by 0.4%. This made precious metals less attractive to investors at the close of the week. There was therefore a slight decline in gold of 0.2% and its positioning at $ 1,661.63 an ounce. What caused the fluctuation of the dollar?

The dollar index was initially headed for a weekly decline - by 1% in particular - due to market expectations of a Fed pivot by the end of the year: early last week it began to spread in the markets there. expectation of an easing of rate hike measures towards the end of 2022. This theory would be justified by the Fed's need to analyze the effects of the tightening cycle implemented in the third quarter of the year.

The release of the US economic data then highlighted inflation still over the top and consequently, market expectations shifted towards a new rate hike expected for the month of November. This would have given the dollar momentum again.

Outlook on November and December. What to expect?

The markets would expect, in December, a period of stagnation in the rate hikes by the Fed, since - as anticipated earlier - the FOMC's will would be to take time to assess the economic impact of the tightening policies. implemented in 2022, established with the aim of stemming ever-increasing US inflation towards the target level of 2% (this objective was declared at the Jackson Hole Economic Syposium of September)

In fact, on Friday 21 October, an article by Nick Timiraos of the Wall Street Journal was published where it was suggested the Fed's willingness to ease the pace of rate hikes by the beginning of 2023. This factor was subsequently remarked by the president of the Federal Reserve Bank of St. Louis, James Bullard who, in a speech to Bloomberg TV , explained that he expects the Fed to end its path of aggressive rate hikes and pace changes by the beginning of next year, establishing a stronger stance. accommodating:

"The goal is to push inflation down, but this does not mean that rates will rise forever [...] not that there will be no further adjustments, but once a restrictive rate is reached that puts prices under pressure, the committee could pause rates or make small upward adjustments if the data continues to provide negative outlook, " comments President Bullard.

Gold: the factors behind the bullish outlook

A freeze period in rate hikes could create a favorable environment for the yellow metal.

Despite the bullishness of Tuesday 25th, gold would however first have to break above $ 1735 for a bearish trend ending: 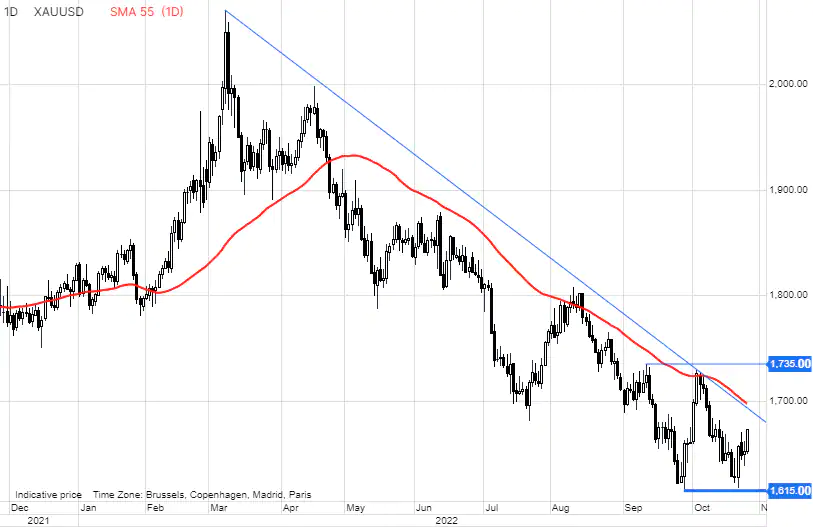 Yet, Saxo analysts' prospects for gold would still be bullish: the easing in rate hikes expected by early 2023 would increase its attractiveness to investors. This, combined with a complex macroeconomic context, characterized by persistent inflation and a tense and uncertain geopolitical climate , would create a completely favorable scenario for the yellow metal.

Meanwhile, uncertainty reigns in the markets

US economic data begins to leak the results of the aggressive Fed rate hike cycle in the third quarter of the year. In particular, economic growth has been characterized by continuous rebounds, with a continuously decreasing trade deficit (progressive reduction of the difference between the value of imports and the value of exports). The aggressive rise in interest rates would have gradually slowed down consumption(data from the US Department of Commerce showed that consumer spending in the third quarter slowed to 1.4) and consequently demand, contrasting - on this side - inflation.However, this would have dropped, but less than expected: + 8.3% in September compared to the last target of 2% declared at the FOMC meeting in September .

Despite Bullard's statements indicating a path towards a more accommodative monetary policy by the Fed, US economic figures therefore highlight over-the-top inflation. This is why the markets do not rule out - in November - a new corrective action by the Fed: in particular, a new increase of 75 basis points would be imminent, the fourth of the year in this measure.

Such expectations would therefore run against the yellow metal, which would become less attractive to investors as confirmation of a new rate hike in November would increase the opportunity cost associated with holding bullion. This state of affairs, however, would undergo a new trend reversal in December, a month where markets expect, as we have seen, an easing of Fed tightening activity and the establishment of an ordinary monetary policy for 2023: in this scenario, in fact, gold could rise again given the lull in the interest rate level.However, even here the opinions are conflicting, since the theses are different in contrast to what is stated by President Fed Bullard. In fact, there are those who believe it is too early to talk about a slowdown in rates before the start of 2023: Bart Melek , global head of commodity strategy at TD Securities commented "we do not expect a pivot, because inflation will continue to be a problem for much of next year . " The context is therefore characterized by uncertainty.

Hence the crucial importance of the next FOMC meeting, scheduled for 1 and 2 November: investors are waiting for confirmation and looking for a clearer vision: from the meeting the trajectories of rate hikes should emerge with greater clarity. Fed.

Demand for Gold in China: possible turnaround from September?

On Friday 25 the China Gold Association reported data indicating a drop in gold consumption of 4.36% in the January-September period. Over the same period, the demand for bullion and coins fell by 10.46%. The Covid 19 pandemic caused a drop in jewelry sales, which recorded a 30% drop compared to 2021. This negatively impacted spot gold demand throughout the first part of the year. However, the price has recently undergone a turnaround. In the third week of September in particular, we saw a jump in the price of gold on the Shanghai Gold Exchange, which rose to $ 43.60 / oz on the London spot price.The increase would be linked in the first place to producers' expectations on demand.In fact, in view of the expected seasonal peak in Chinese gold consumption (dictated by the period of the ceremonies), they would have stocked up on the yellow metal in August, causing an increase in imports.Another factor to consider is the continuation of activities by the major Chinese gold production poles despite the pandemic. The Shenzhen complex - for example - has never stopped production.Overall, data from the China Gold Association on Friday shows gold production between January and September increased 14.04% year-on-year to 269,987 tons .

In the meantime, the trade deficit in India is widening more and more: it is now close to reaching the all-time high reached in July. The government is therefore looking for solutions to stem it, as the Rupee is progressively collapsing in trade. The government is considering persuading Indian citizens - who collectively own the world's largest private gold reserve - to deposit their treasures with banks and earn interest.The idea is to recycle the existing gold within the nation, reducing its dependence on the massive imports of yellow metal that characterize it, thus easing the pressures on the trade deficit.

The Modi Plan in detail

Citizens can deposit their gold in a bank for a period ranging from one to 15 years, obtaining in exchange interest up to 2.5% on the value of the metal as well as a promise to return the equivalent in gold (or cash) to the expiry of the term.Once deposited, the metal is then melted to verify its purity and resold. This would theoretically increase local supplies and reduce India's dependence on imports of the yellow metal, limiting the trade deficit. This plan, called the Modi Plan , is not new in itself. It was in fact already established in 2015.However, the first attempt to implement the Modi Plan was not very successful: of the 25,000 tons owned by families, the World Gold Council data show that only 25 were collected.The motivation? Jewelery plays a very important role in weddings and parties and is often passed down through families. The most significant limitation of the program is therefore the emotion factor: the jewels are melted to verify their purity before being resold, which means that by adhering to the plan, depositors implicitly accept never to get their beloved memorabilia back.

Tax on the import of gold: offset by the fall in prices

The Modi Plan would not be the only measure taken to stem the Indian trade deficit: already in July the government tried to discourage the purchase of ingots by raising the tax on the import of yellow metal, even bringing it to an all-time high.Yet the measure would not have been enough: on the occasion of the current Indian festival season - which runs from October to December as seen in the previous article - the demand for gold peaks and the import tax, despite its peaks. historians, would not have been able to contain the demand. The impact of the measure was in fact fully offset by the decline in global prices.

In addition to the gold held by Indian families, another important source from which to draw in India is represented by temples.Devout citizens traditionally donate gold to deities on special occasions as a sign of gratitude by depositing everything in temples. These therefore contain a real treasure: according to Bloomberg 's estimates, about 4000 tons would be deposited there, an amount of gold comparable to that held at Fort Knox in the United States.According to Pethe , President of All India Jem & Jewelery Domestic Council , the funds of the temples would be fundamental for the success of the Modi Plan and therefore should be included on this.The limit, however - as pointed out by Surendra Mehta, national secretary of India Bullion and Jewelers Association Ltd. - is to convince all temple administrators to allow the melting of the deposited gold, it being understood that even in the case of positive answers, this could not a little contradict the pious citizens.

The material contained in this article is not intended to incentivize specific forms of investment. It is not and should not be construed as an offer to sell or a solicitation of an offer to buy or subscribe for any form of investment.

This article has been compiled using information obtained from sources that Italpreziosi Spa believes to be reliable, but which must be interpreted only in terms of information and not consultancy: there is no guarantee that any forward-looking statements will materialize. Therefore, Italpreziosi Spa does not guarantee the accuracy and completeness of the data and analyzes contained in this document.

The euro on par with the dollar: how long will it last? The ECB today can shake up the currency (money.it)