The stock exchange week was largely characterized by the monetary policy choices of the major central banks: the Federal Reserve (FED), the Bank of England (BOE), the Bank of Japan (BOJ) and the Swiss National Bank (SNB). Who decided to start ,despite the insurmountable inflation, (figures around 1.6% and so below the target of the 2% ), was Janet Yellen on Wednesday that has decided to keep the route announced by implementing the second rise in the rates of the year. The decision - not unanimous - has led the rates between 1 and 1.25%. The slowdown in growth accused from the beginning of the year - support by the Fed - is a temporary phenomenon and does not affect the PIL projections for the current year and those for 2018, which remain at a 2% growth target. In addition, the Central Bank has said that it’s planning a further raise rates in 2017 and another 3 next year. Apart from the increasing of the cost of money,the attention has been focused on the long-awaited reduction in the Fed's portfolio, which amounts to $ 4 trillion and a half (or $ 4.5 trillion),due to the continues liquidity injections needed since the crisis of 2008. The policy of standardization of the budget will take place very gradually, probably from September (provided that the economic situation evolves as expected). The budgeting process of reduction will last several years.

Contrary to a tightening policy of expanding the Fed’s President of Minneapolis, Kashkari: according to him, the health state of the USA economy would not be sufficiently solid. It is to be said that outside of the FOMC (the Federal Reserve's Monetary Policy Committee) the critical rumors that predict that the Fed's expectations are not so optimistic aren’t few. Including Mark Cudmore (macro-strategist and editorialist for Bloomberg) who underlines how the data systematically deny the FOMC's growth projections and this collapse with reality only causes a further loss of credibility. Cudmore cynically states the fact that Fed analysts were been unable to make a correct prediction for seven years. To confirm this, in the chart below we can see how both the Bloomberg U.S. Eco Surprise Index and the Bloomberg Dollar Index are moving down since the beginning of the year. Let's remember that the first is an index that represents the discrepancy between analysts' forecasts and real data.

Expectations VS Reality: The recent USA data describe a different economic situation instead of the one made by the Fed. 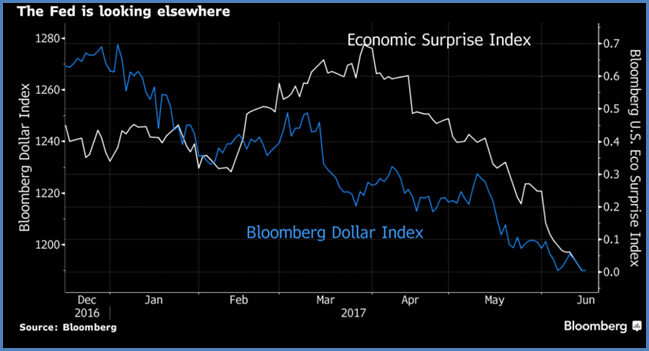 The market reaction to Yellen's words was initially quite lukewarm, except for the Dow Jones who has signed the newest historical record. Only in the day after , the operators have begun to show some preoccupation regarding the USA economy and have for this reason have begun to reducing their positions by closing down the main stock listings in negative territory.

However, what seems to be worrying more the markets is not the strengthening of rates but the lightening of central bank balances. Adherence to restrictive policies will sooner or later affect the ECE that, with the end of Draghi's mandate, the tapering could seriously begin (even if during the last Governing Council there is no mention of a progressive reduction in the incentive). The discussion is therefore postponed but must be addressed, according to Benoit Coeure, by the end of the year.It is also true that the effects of expanding policies do not produce hope (with the exception of parcel of shares). Inflation ceases to take off and employment (both in America and in Europe) is now more income from temporary or part-time work. Coeure's hope is that these job positions will consolidate into more stable contracts, contributing to rising nominal wages and in consequence inflationary pressures: at the moment, the hypothesis seems remote.

Inflation core in Europe: at 1999 levels. 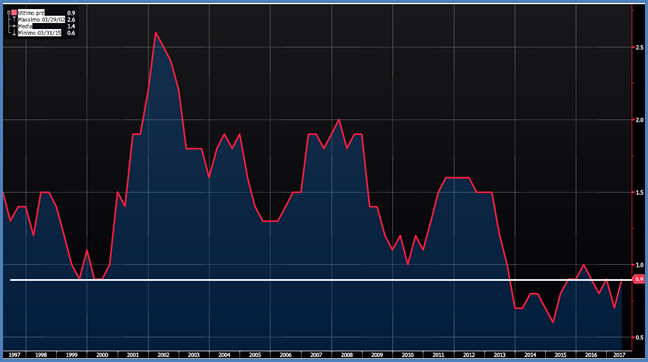 During this week also the Canada's Governor Stephen Poloz said that he wanted to move the first steps in the same direction as the Fed. According to the Canadian Bank's number one, the time to put an end to the too low rates is ripe. Probably this event is dictated by the fact that the country's real estate market is currently in a blatant blow (also recognized by some members of the government itself). As an example, Bloomberg reports that in some areas around Toronto, housing prices have grown by 32% in just over a year. 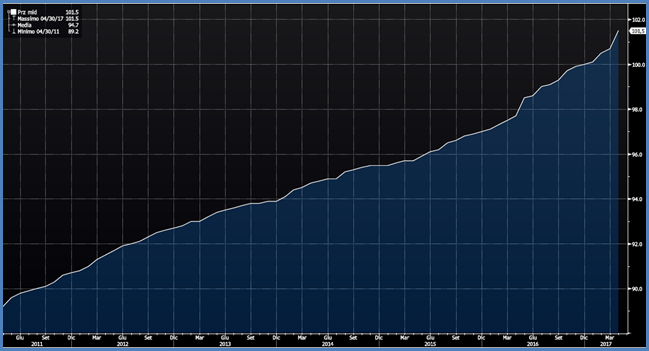 The specter of another crisis like the mortgages subprime of the USA mortgages approaches? Most probably no, because unlike for the United States, no structured finance products based on mortgages, has been created. The risks, however, are not lacking: families who have been indebted for a home purchase are many and their debt is on average 167% of their income.

After the Fed and the BoC on Thursday was the turn of the Bank of England: to astound the operators was the unanimous decision to keep the policy on unchanged rates. The split within the Bank's board (5 votes in favor of maintaining rates at current levels, 3 against) strengthened the conviction that a more restrictive approach could soon be expected to calm inflation.

However, throughout the year, there is no increase in rates given the current economic conditions. Additionally, operators begin to consider a rise with a probability of 55% only at the end of 2018.

Probably a rise in UK rates? It will not be discussed until the end of 2018

Again on Thursday, there were announcements from the Swiss National Bank (SNB) that have decided to leave unchanged negative rates as well as that of the Japanese central bank: also in the latter case, the accommodating Governor Kuroda's monetary policy remains unaltered . The Institute's number one reiterated once again that this year, the cost of buying assets on the markets will amount to $ 700 billion (80 trillion yen). 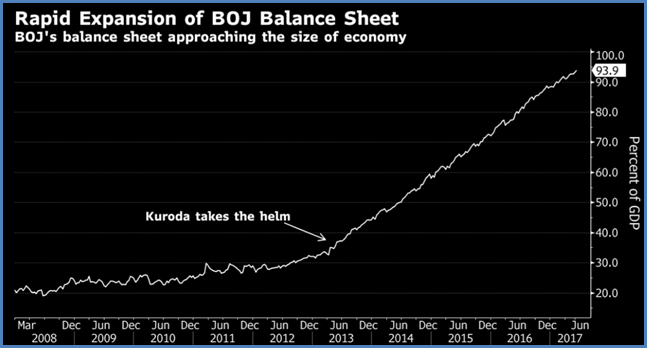 As already mentioned, the calm that is still characterizing the market, despite the complex political and geopolitical scenarios (as well as the disappointing macro data) raises some worries between the analysts. As noted Marko Kolanovic - Global Head of macro quantitative and derivatives strategy at JPMorgan - the index VIX (which measures the implied volatility of options on the S & P500, also known as the Fear Index) over the past 20 years has closed below $ 10 Only 11 days. Of these closures under $ 10, seven have been in the last month. Kolanovic adds, "Does it seem to you that the last month has been the more quiete quietest as far as macro events are concerned? (Testimony of Comey, UK elections, Draghi speech, Qatar, Facebook flash crash, Amazon, Netflix and Google). Kolanovic concludes by saying that this low volatility is likely to last for a little while and warns that an increase of the same could be triggered from one moment to the other causing "catastrophic losses" to all those funds that currently ride this abnormal trend. In the same vein, Michael Contopoulos of Bank of America warns investors to hold overly bullish positions: "We would refrain from being too long here and think it is a good time to start some hedges."

Volatility Index(VIX) at historical minimal ... how long will it last? 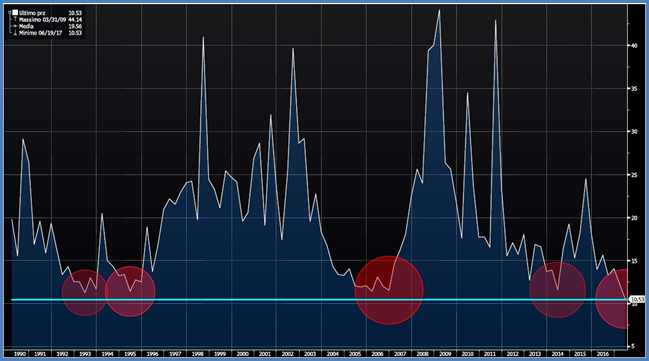 The second rise in rates by the FED (although already widely priced by the markets) has given new strength to the dollar by exerting downward pressure on precious. The yellow metal touched 1252 $ / oz (minimum of 3 weeks). If the push to the down would continue the levels to monitor are - apart from the 1250 area - the next one being at $ 10 lower at 1240 and finally the area around $ 1218 - $ 1220 an ounce. However, the market currently believes that there is little space for further increases, as even five-year inflation expectations are rather pessimistic: positive signs for yellow metal and, more generally, for precious ones. Moreover, the geopolitical factors will continue to play a key role and will probably support the quotations: apart from Brexit (which is rising all the way up) and filed shortly in France elections, both Germany and Austria will go to the polls. Finally, overseas voices of a possible Trump impeachment will not help to curb the race towards refugee property.

XAUUSD: In green the resistances, in red the supports 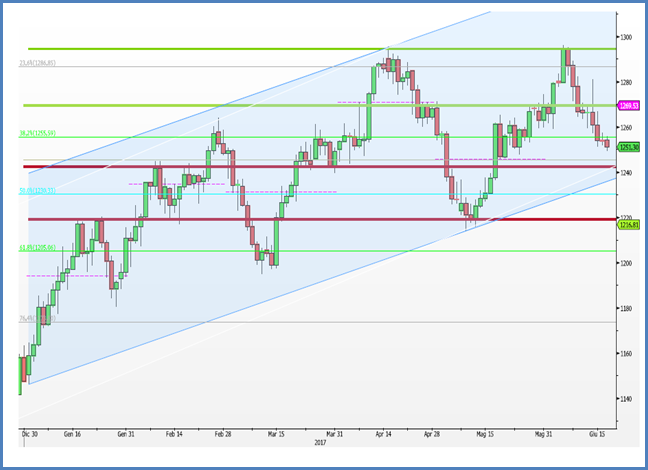 XAUUSD: Price has found support in the $ 1250 / oz, this level equals with the 50% of Fibo tracked from the peak in the last July till the minium touched in December.In green the average mobile to 100 days 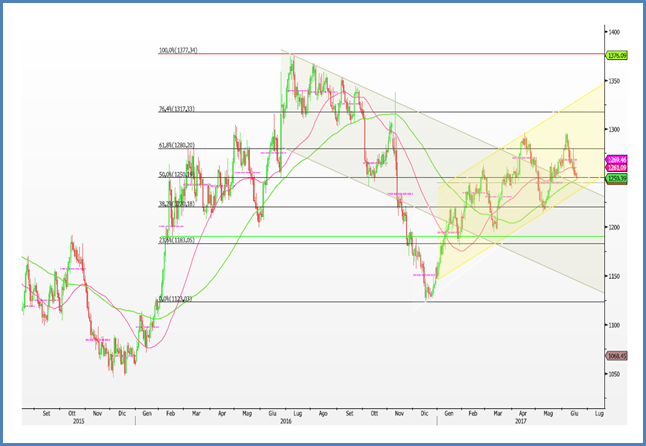 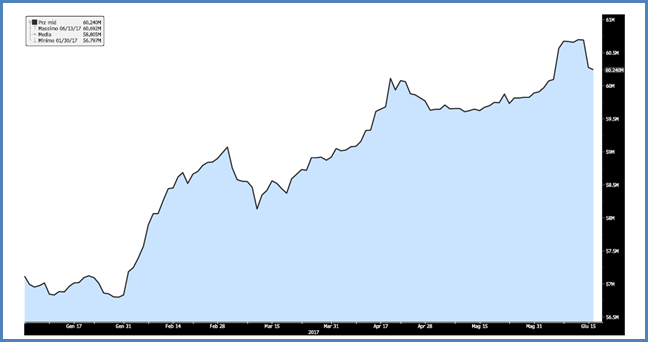 XAGUSD : Silver once again slips below 17 $ / oz, a major support during the first half of 2017. Metal is currently below 23.6% of the Fibo track from the peak done in July to the lowest touched in December. 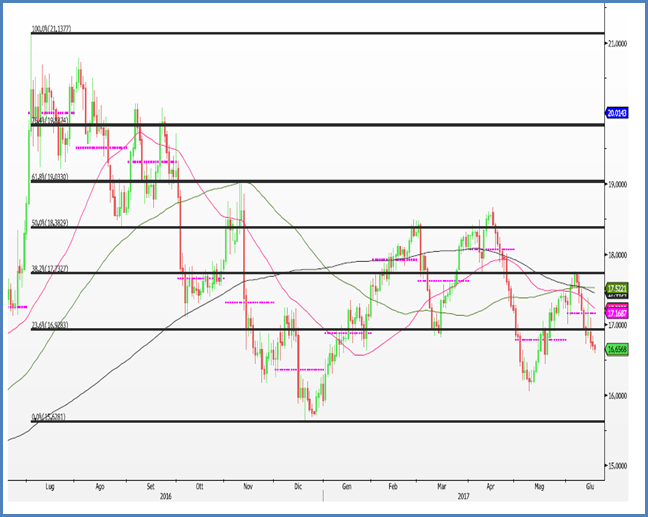 Just as gold was touched, silver also suffered from rising rates. Net bullish positions for the metal (at COMEX) decreased after 3 consecutive weeks during which they had risen.

XPTUSD: Currently, the price is to test the lower edge of the bullish channel that came into being in early May. 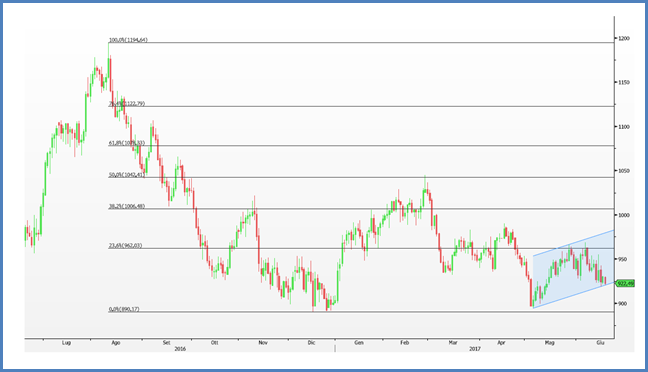 The metal is lying above 900 $ / oz. If this level is going to collapse due to the lack of buyers, the next support is located in area 895 (price on May 4th). The relative lack of interest in platinum is partly explained by the substitution of it with palladium in the construction of automotive catalysts (see below).

XPDUSD: Palladium reached its peak in 2001, breaking a long-term bearish trend. Currently, the metal is withdrawn under $ 900 an ounce. 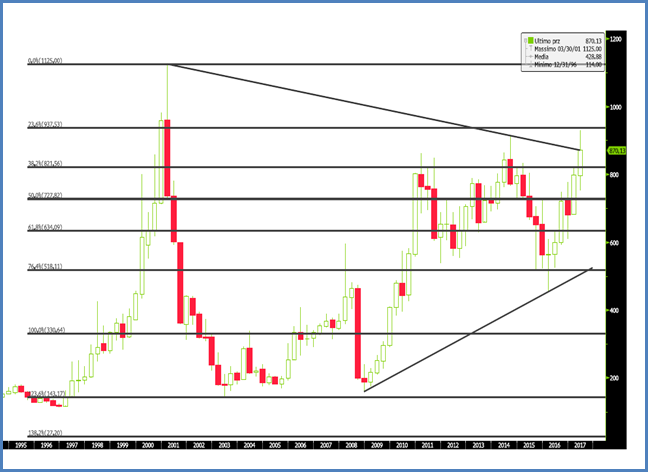 All the major forecaster (GFMS, Metal Focus, Johnson Matthey) support that there will be a significant palladium deficiency that will continue throughout 2017. Also the global demand is expected to rise (+ 7.6% according to Johnson Matthey) push especially from the automotive industry, which will require a record amount of 8.2 million ounces. Current (and future) legislative emission standards (Euro 6c in Europe and Tier 3 in America) should make additional space to the palladium instead of platinum: the latter will gradually be replaced by the first in the construction of catalysts. On the supply side, a slight increase of 1% is expected. However, as the Commerzbank note, recent car sales figures in America and China are not encouraging: for this reason, the Bank plans to shorten a downward correction of around $ 20-70 / oz from the current price ($ 870 / oz ): This would result in a price range of between $ 800 and $ 850 an ounce.