If last week the geopolitical tensions between united states and north Korea has caught the attention, this week ( see the ITALPREZIOSI’s REPORT 8-11 AUGUST) the spotlights have been targeted exclusively on the issues within American politics. Trump's partial head back in condemning Charlottesville's events at the White Suprematist procession had caused numerous defections between members of the two Presidential Advisory Committees, the Strategic and Policy Forum and the American Manufacturing Council, to such an extent that they have been separated: a bad signal that have put in doubt the effective ability of the President in keeping his promises made in the electoral campaign.

We remind that Trump has just came out from the bankruptcy regarding the replacement of the Obamacare.. In addition , to inflict another blow on the administration were the rumors regarding the resignation of the chairman of the National Economic Council (NEC) Gary Cohn, rumors that were later denied. Cohn (ex Goldman Sachs), as the CNBC points out, is now become the most important person in Washington, being both the key man in the implementation of tax reform, and the presidential team member very closer to the financial and Industry of the country. The markets have reacted badly: on Thursday the S&P500 recorded the worst session in the last three months (-1.5%) while the Nasdaq closed the trading day with a -1.94%. Volatility also increased with the VIX which hit 15.55. Instead, continues to gain land the precious metals: gold is getting closer to $ 1,300 while silver travels steadily over the 17th. In addition to the growing political uncertainty, the race to the precious is driven by the persisting weakness of the dollar against major currencies.

During this week, in addition to the political issues, what have caught the attention was both the FED minutes and BCE. From Frankfurt some concerns about a possible adjustment of current monetary policy has come out: in particular, the central bank's board of directors fears an excessive repricing of the financial markets, especially regarding the currency market.

However, the BCE has warned the markets by saying that the current conditions (accommodating) cannot be taken for granted in the immediate future. The currency market has reacted cautiously to the announcement: the eur/usd exchange corrected shortly to the downturn in the 1,1650 area and then recovered losses after a few hours. Shown the concerns about low inflation and a relatively strong euro, analysts believe that Mario Draghi will not say anything new in the speech at the Jackson Hole on the next 25th of August . It is also expected that the first tapering references will not be made before September.

Similar worries have also been expressed by the Fed: US inflation is not yet close to the auspicious levels. However, the members of the board expressed their support for the gradual reduction of the budget. Such normalization should begin in September and proceed very slowly over the next few years. Chances about the next rise in rates falling from 43 to 40% (with reference to December 2017) . 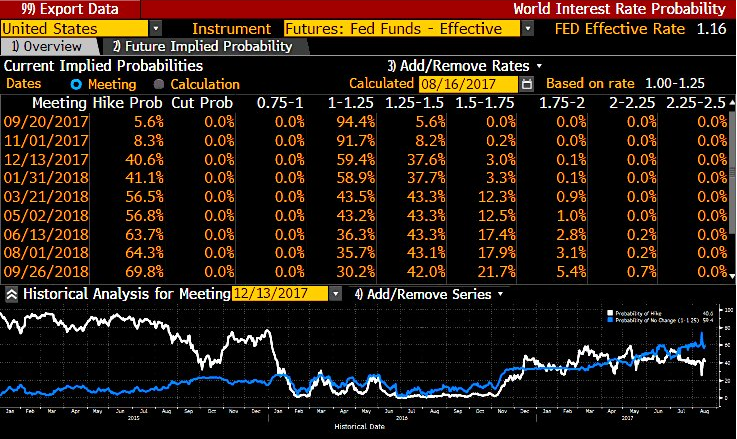 Yellow metal continues its race toward the up this week, not so much influenced by the geopolitical tensions between America and North Korea but more than it by the political uncertainty which surrounding the Trump administration. Gold is currently trying to break through the 1295-1300 $ area for the third time in a few months and still well above the moving average at 55,100 and 200 days. As already confirmed in the last report, the long-term outlook is constructive: nevertheless, to be confirmed it needs a weekly shutdown above $ 1295 / oz. Only in this case the price could go up to the tops as happened in the last July at 1375 dollars. 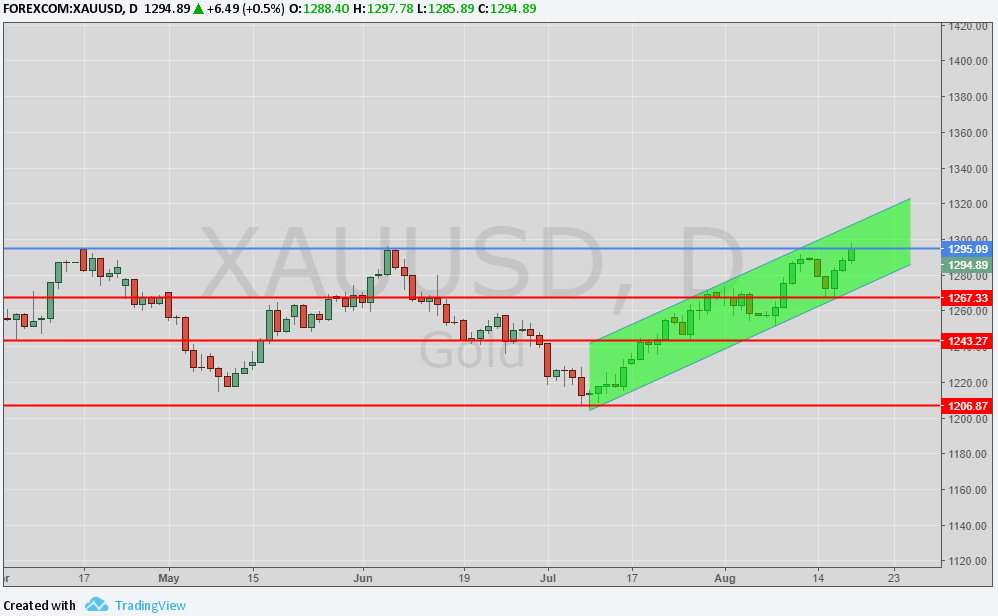 Looking at the graphical analysis and moving to a wider time-frame we can see how the price managed to break up a historic trendline (see graph below). This signal could represents a trend inversion of a long period 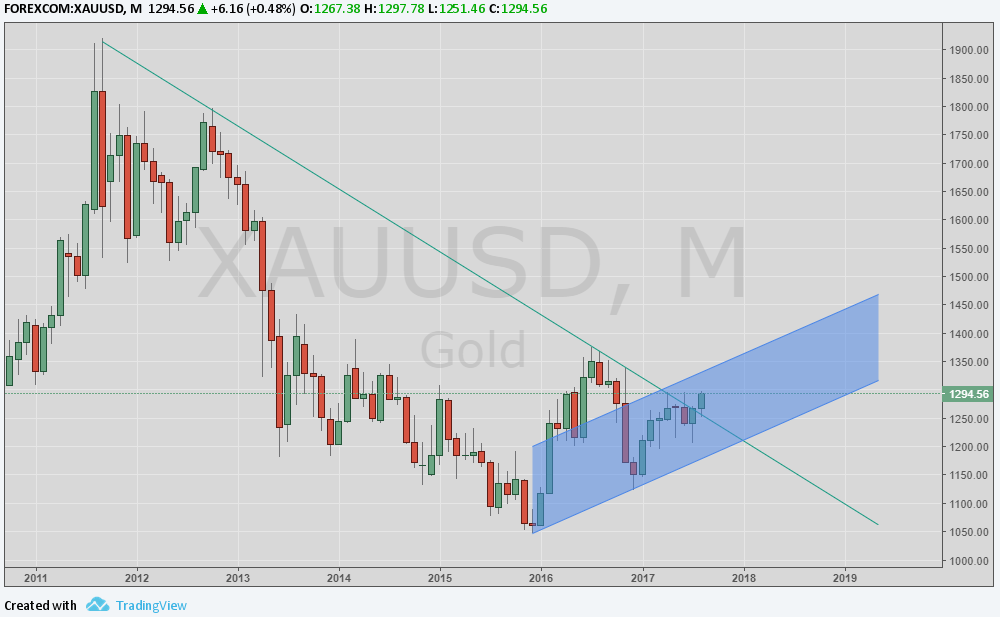 Also the silver as the gold, continues the run to the rise and during this week it has succeeded in bringing the average mobile to 200 days in area 17040. A closing above this level could push the metal toward the 17,80 $ / oz (maximum relative of period). Such a level key, if broken, could furnish a further risen sprout in area 18,70 $ / oz (maximum of April). 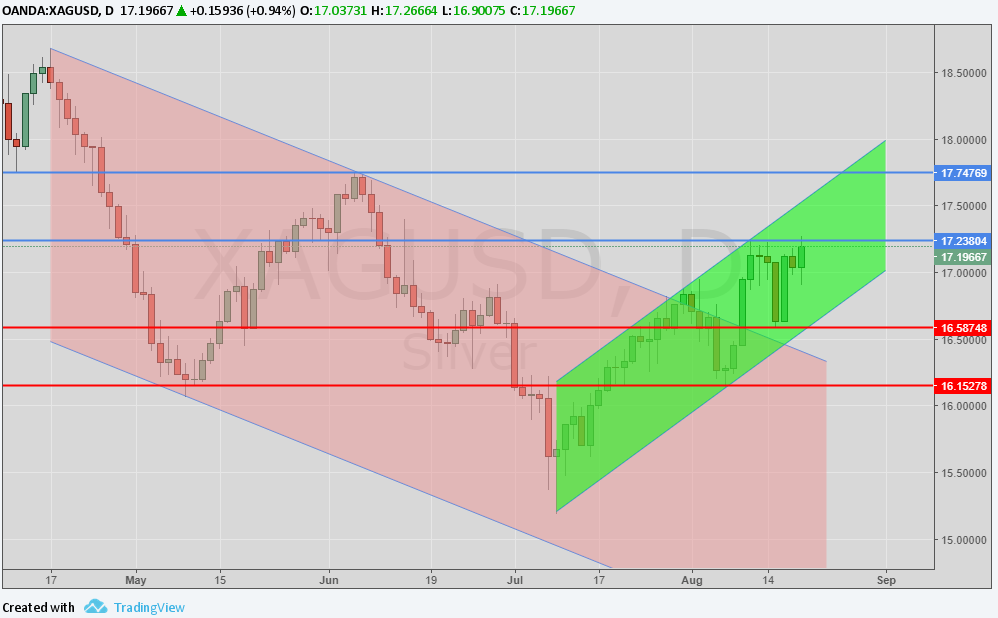 The outlook of this long period keeps on being positive also for the platinum. The metal has a good support in area 890 $ / oz (least of December 2016) and it seems agreed to continues the run to the rise. The signal of strength is given by the recent closing above the resistance put at 972 $ /oz.s The next target to the rise is represented by the 990 dollars: broken such a level the metal could push in area 1040 $ / oz before and, subsequently, in area 1050 $ /oz.s

The risen phase of the palladium keeps on consolidating. Currently the metal has broken both the resistance put at 911 dollars ounces (maximum of the 2014) and the more recent at the 914 $ /oz.s.

The price constantly remains above the average of 55 days in area 865 $/oz.s. However, being in a phase of iper purchasing, could bring to a little change towards the decrease.

Proceed the weakness of the dollar towards the principal currencies and euro. The exchange rates had changed for different days around the area 1,1650 - 1,1750 and every correction toward the lowest part of the range is quickly absorbed by the buyers. The recent declarations of the BCE at the moment doesn’t make any effects. For the currency of the eurozona the outlook keeping to be positive. We confirm that the green ticket is heavy both from the mistrust for the missed reforms promised by the Trump administration, and from the softest tones of the FED concerning the raising of the rates of interest