Also this week has been characterized by the interventions of the governors of the central banks. Last wednesday 20 September took place the meeting of the Federal Open Market Committee (FOMC) the committee of monetary politics of the American central Bank. And although the intentions announced by Janet Yellen around the reduction of the budget of the institute are broadly been said already by the market (put on the careful ones during the reunion of June) the perspective of a further rise of the rates within the end of the year it has somehow caught the operators by surprise.
In the specific one, Yellen has announced that the dismissing of the assets currently held by the FED will happen to a rhythm of 10 million dollars per month (equivalent to an implicit rise of the equivalent to an implicit rise of the rates around 75 points base) to which is added, as already said of a further rise of 25 points that will probably take place during the month of December. The 10 million already said will progressively become a maximum of 30 in 2018 for what it concerns the state funds while a maximum of 20 for what concerns the other titles. The probabilities of a raising of the essay of interest within the end of the year have passed therefore from the 50% pre-meeting to the 67% post-meeting. Nevertheless, if in the brief period of the FED behave "hawk", in the long period the "finishing line" of the curve of the rates has passed from the 3 to 2,75%.

The reason of such deceleration depends from the fact that the economists prevent a cooling of the growth to global level cause both of the aging of the population and of the low rhythms of growth.

Finally, to leave perplexed, have been Yellen’s words regarding the inflation, still too much weak (it stops to the 1 ,9%, despite very vivacious job market , next to the full occupation). The number one of the FED have in fact defined the persist of low inflation "a mystery", expressly acknowledging not to succeed in understanding what factors are constantly pushing to the rebate (or however certain not to the rise) the index of the prices.
The reactions of the markets are not made to attend: the eventuality of a rise in December have pushed immediately the purchase on the treasuries and on the dollar, baiting to the meantime the sales on the assets not-yielding what the jewels (first of all gold and silver). At the end session the gold has been inclined up to the test of the 1300 dollars per ounce while the silver a little bit under the 17 $per ounces.

Thursday 21 September instead has been the turn of the BCE which, in the usual monthly bulletin, has underlined a generalized improvement of health state of the European economy and has seen again to the rise of the growth for the 2017.

Also for the Eurotower, nevertheless, the unknown inflation stays: to forehead of a great share of the work force (except for Italy and Slovenia, below to the average of the other European Countries) the valuation regarding the increase of the prices have been seen again to the rebate. For this reason it continues the note, the Bank " has maintained unchanged the orientation of monetary politics and it will decide in autumn respect a calibration of the tools of monetary politics in the following period at the end of the year." In practice, the quantitative easing, is still necessary.

The prudent attitude of Frankfurt this time has gotten the hoped effect: the euro has not been strengthened towards the dollar. A value too strong, in fact, could damage the export of the Eurozona frustrating all the recent efforts for the economic increasing. On the other hand, if the rises of the rates will make attend for a long time , to be affected more will be the whole European banking sector, by now destroyed from the easy-going monetary politics of the BCE.

The price continues the decrease after the recent comments on the American monetary politics from the FED. The hypothesis made from the FOMC around a further rise of the rates of interest in the month of December has strengthened the green ticket dollar) penalizing all the row materials quoted in dollars. Also the three rises predicted in the 2018 don't have sustained the quotations. Currently they keep on supporting the price the continuous tensions geopolitical instigated from the North Korea, especially after the announcement of Pyongyang about trying the hydrogen bomb in the Pacific. In the long term the picture remains constructive being the yellow metal inside the channel formed at the beginning of the year. In addition the FED has often overestimated the inflation an element that leaves some doubt around 3 rises in in the 2018 calendar. 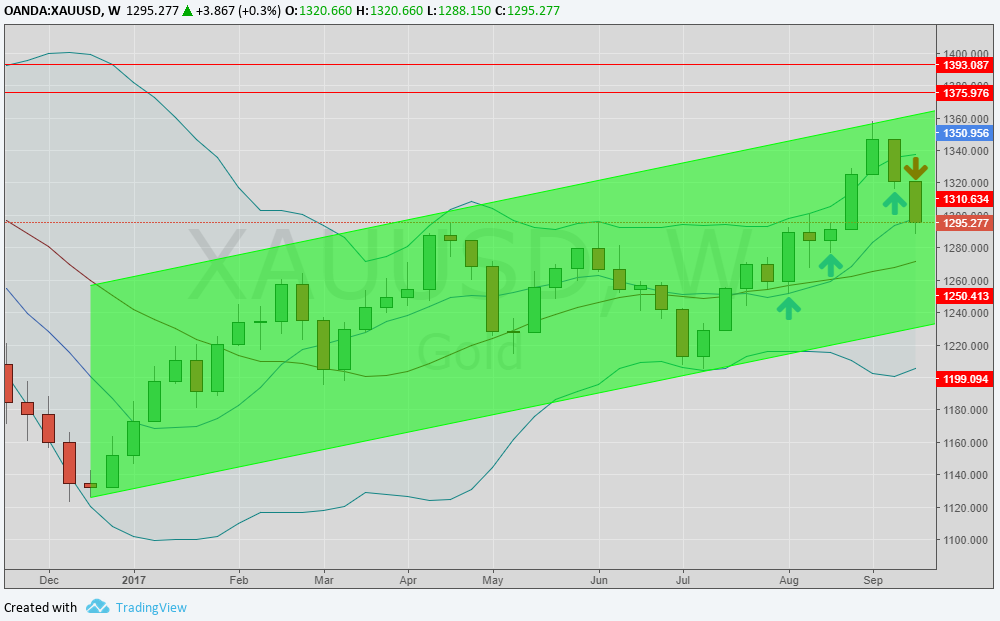 At the daily level, the gold it has been supported on the 1285-1290 $ / oz level that could offer a solid base for a possible restarting . Nevertheless, if the run to the rebate will continue, in the scope we would find a support to 1270 dollars and after at 1250. 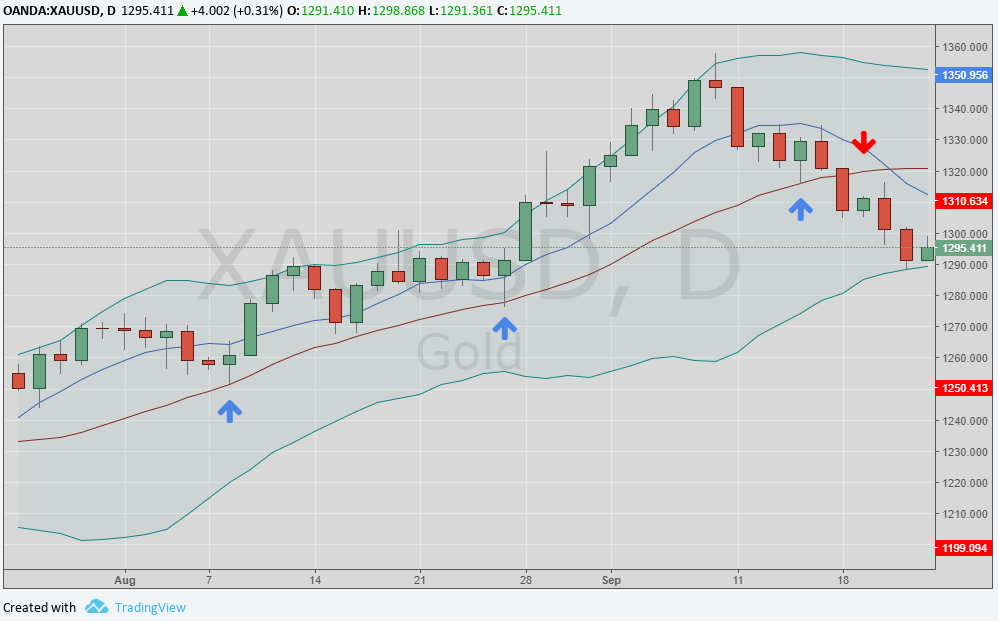 Also the silver has strongly accused the rise of the dollar. As the gold, the metal has failed into pointing to a rise an important psychological resistance, in this case the 18 dollars per ounce. Currently the price travels below the 17 $, after having proven a support to 16,80-16,90 (I level that coincides with the daily average to 100 days). Such range of price is revealed to be a solid base in more occasions during this year. If the price had to continue its descent, the first supports are found in area 16,50. 1635. 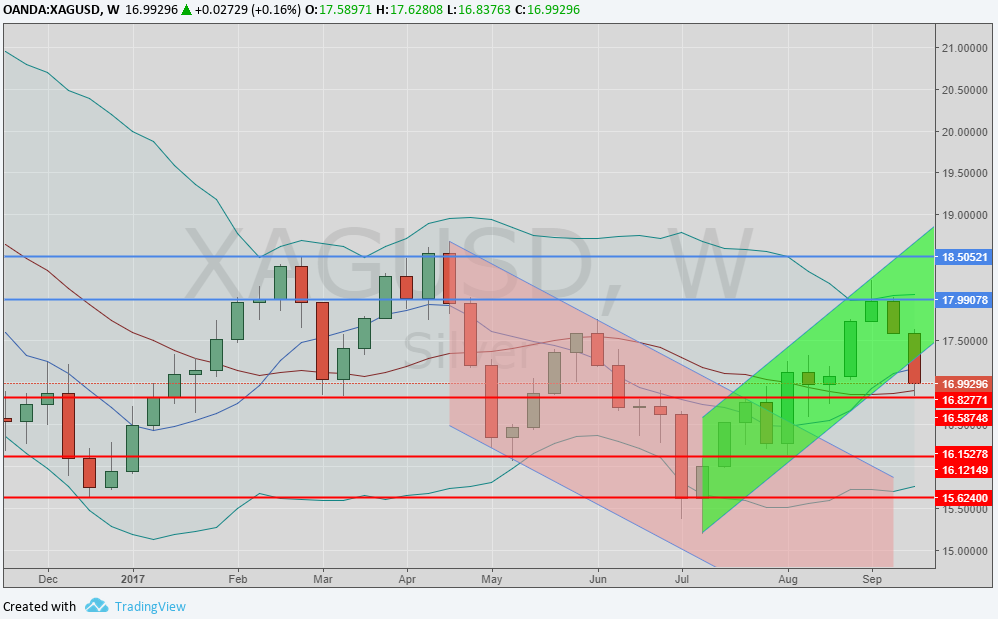 Second week of decrease also for the quotations of the platinum. The price. as anticipated in the last report. has escaped from the channel of the rising formed from the half of the July. At the moment the nearest support (proved during in this week) is found at 930 $ / oz while the second at forty dollars lower in area 890-900 $ / oz (minimum of December 2016). As notice Commerzbank, there is at least a driver of rising for the metal: Platinum Impala the second producer of the world of platinum, is dismissing thousand of employees following the brought losses last fiscal year. This could implicate strikes in the brief-middle term and, accordingly, a diminution of the production. 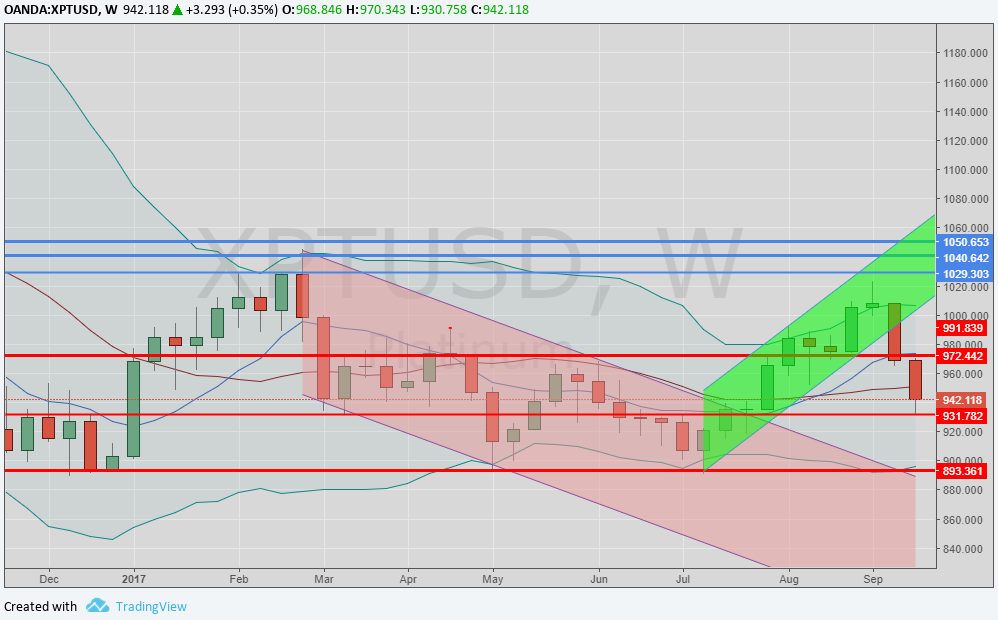 Continues the corrective movement of the price of the palladium. The metal, after having been rejected from the strong resistance around the 1000 dollars per ounce, refolding for the third consecutive week toward the 900 dollars. The nearest supports are found in area 910-915 (maximum of the 2014) and subsequently in area 880 $ / oz and 840-850 $ /oz.s The fundamental ones, continues to be supporting (increasing question of physical metal in front of scarce offer). Besides, as it makes to notice Reuters, the exchange-tradeds fund (ETF) that invests in the metal have seen, in the month of August, the greatest influx of funds from 3 years to this part: a signal of rising that leave an hope in a resumption of the quotations. 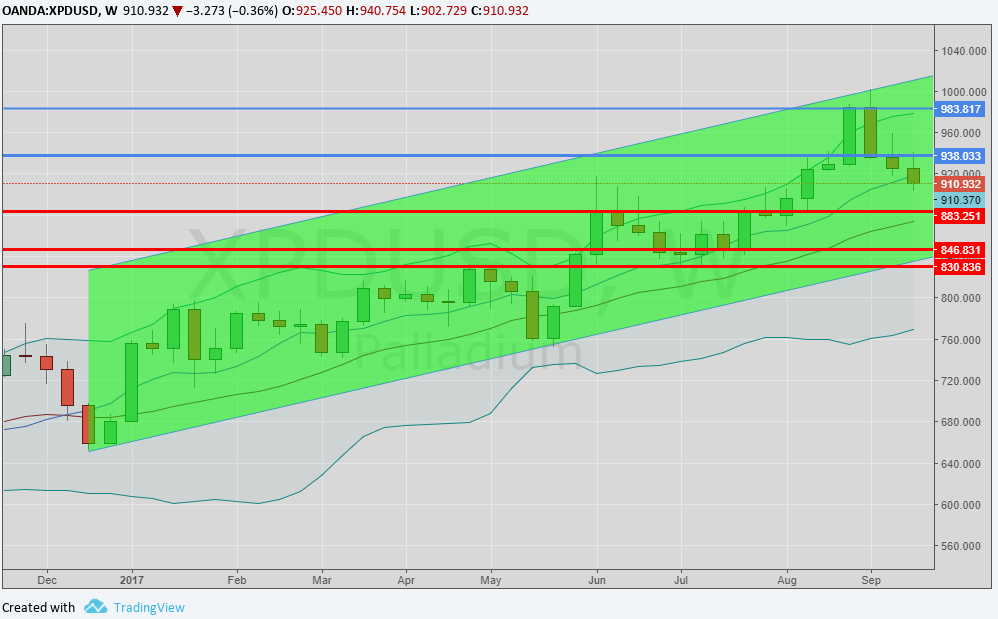 The change it has been stable in the last 5 months in the range 1,18 -120. The words pronounced during the week by Janet Yellen, although has been enough explicit regarding the forward guidance of the FED, they have not grazed the interest of the operators towards the European one. The outlook for the coin of the eurozona is positive. It’ s good to remember that in the periods of market in which a risk is perceived to the horizon the unique coin it’s considered a sort of well shelter, as the Japanese yen. The proof it has been given by the appreciation of the euro after the declarations of Pyongyang. In the underlying graph the principals supports and resistances. 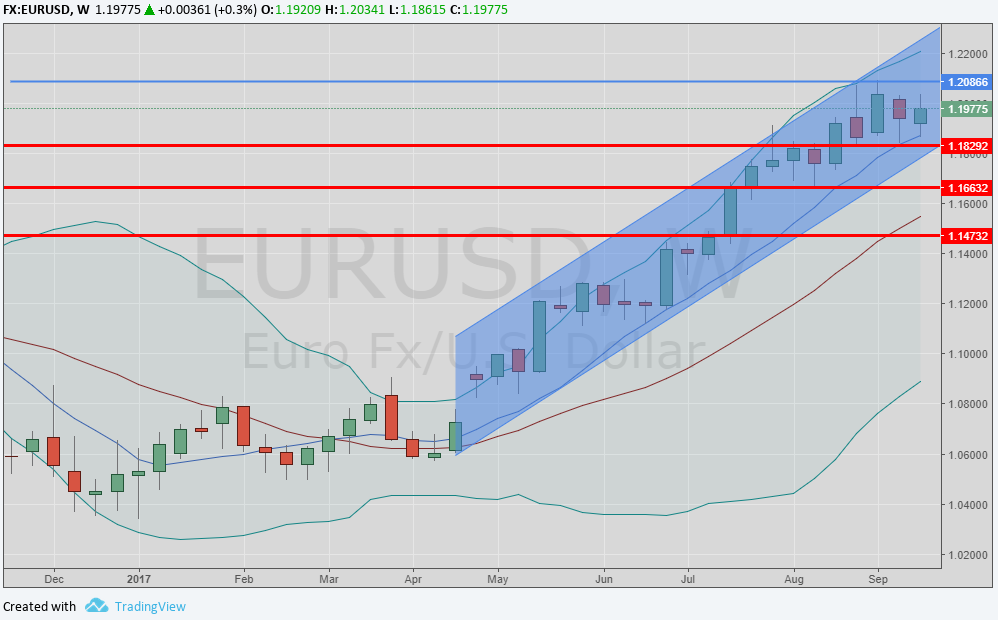