REPORT OF THE 23TH OF FEBRUARY

Week relatively calm on the financial markets despite the two meetings held by the FED and by the BCE, due to the the closings of different stock exchange (Canada, Hong Kong, United States and China) for the celebration of national festivity. The attitude of the operators has been wait-and see with the hope to be able to perceive the next movements of monetary politics for this year. Hope that has been almost fulfilled due to the fact that the messages slipped out by the minute keeps on being to be prudent and they don't allow to slip out, for the moment, upsetting changes of rout.

Wednesday has been the turn of the America Central bank with the records of the last reunion of the FOMC: the picture that has emerged is surely optimist both in terms of growth, and the inflation would be able to reach the target of the 2% . At first the reaction of the investors has been negative, but recovers the following day. The main fear of the investors is an acceleration along the path of the rises of the rates of interest, even if, in reality, such fear doesn't appear justified cause the probability to have 4 rises of the rates during the 2018 course is slightly increased having passed from 25% to 29%.

Carefully on the European side: despite there are good signals on the macroeconomic level (and also on the inflation’s side) , at this moment the BCE doesn’t think is a good opportunity , change its own message regarding the actual monetary politics. What continuous to arouse a certain worry inside the board of the BCE is the strength of the Euro. If the Bank would announce an imminent normalization of its own politics it is probable that the unique coin continuous to grow stronger, causing in this way damns to the export .

Referring to this have been very important the words of the president Mario Draghi which has aimed the finger against "some American politics " that recently said that they are favorable to a weak dollar (clear the reference to the Secretary of the American Treasure Steven Mnuchin) dollar. This behavior- said the number one of the Eurotower-would have been able to force the board of the Bank to modify the actual strategy .

Now the eyes are all aimed to the next appointment of the 28th of February, date in which the new governor of the FED, Jerome Powell, will testify in front of the Congress.

After having taste the maximum ones of the period in January in area 1360 $ / oz the gold has been rejected and lay down approximately 30 dollars lower, than the first support set in area 1330 $ /oz.s The push toward the up of the last week has begun to be more weak despite the dollar is still living a phase of weakness. The recent minute of the FED hadn’t touch the general picture and although there is an increasing optimism at the economic level trying hardly to be at the same level of the quotations on the stock one. Currently the resistance most important is set in area 1360 $ / oz and subsequently above the maximum ones of period in area 1375 $ /oz.s Downward the most important supports are at 1320 and 1300 $ /oz.s The quotations firmly oscillate above the mobile averages at 100 and 200 days.The technical picture is, in the brief period, neutral and goes to the up. 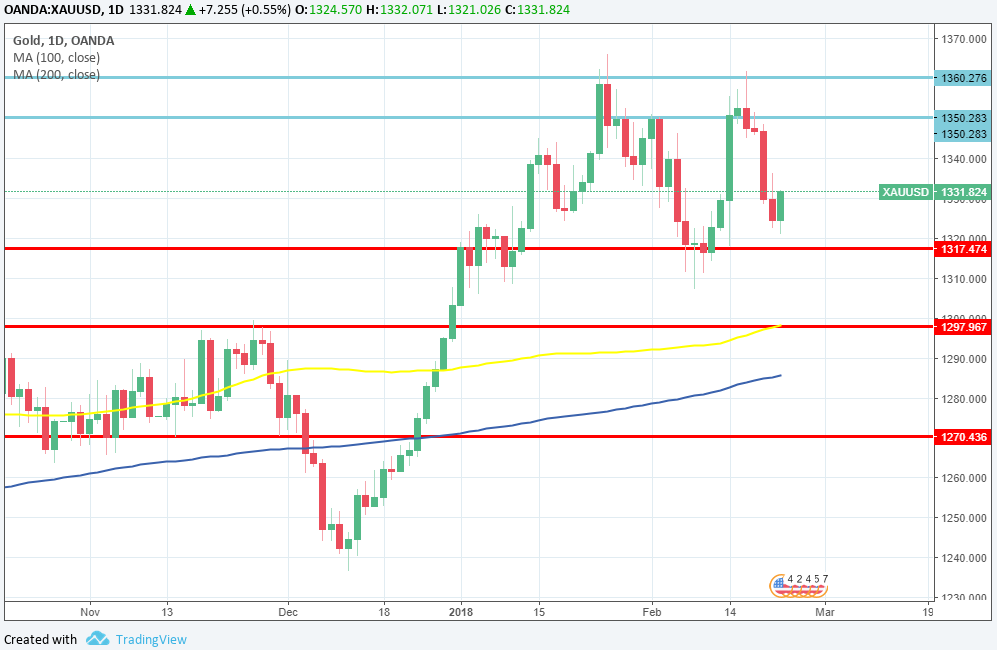 On the weekly graph the outlook is neutral. The metal, although continuous to travel above the mobile averages at 100 and 200 days has failed the staving in of the 1350 $ /oz.s Such dynamics could induce the operators to see in this failure a double maximum (triple if we count the period of June. September 2017) and therefore to put under pressure the quotations. In an optics of long term the outlook is still positive. A change of feelings could happen only below the 1300 $ /oz.s 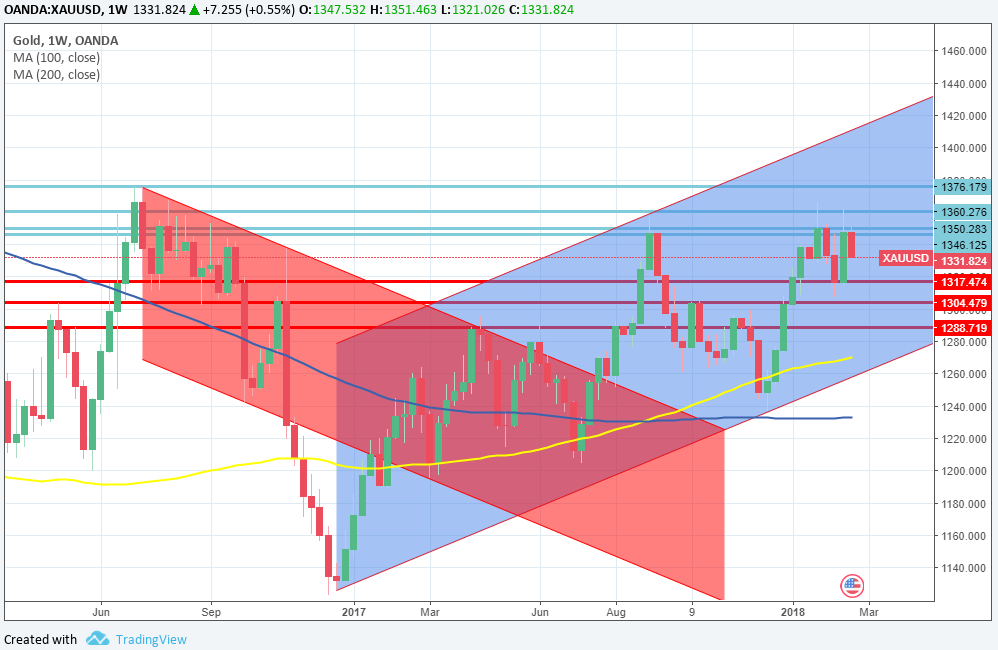 The silver still remains during this week in the range of 16,50. 17,50 $ /oz.s This hard side last from more the one year except for some exceptions and for the moment you don’t see strong drivers which are sufficiently strong to break such trend. The quotations (few above the 16,50 $ / oz) trying hardly to be above the mobile averages of 100 and 200 days even if must be underlined that the metal keeps on traveling (very slowly) inside a trend that goes toward the up (always sees the least ones increasing). A dangerous inversion of rout could verify if the quotations could go below the 15,60 - 15,50 $ /oz.s 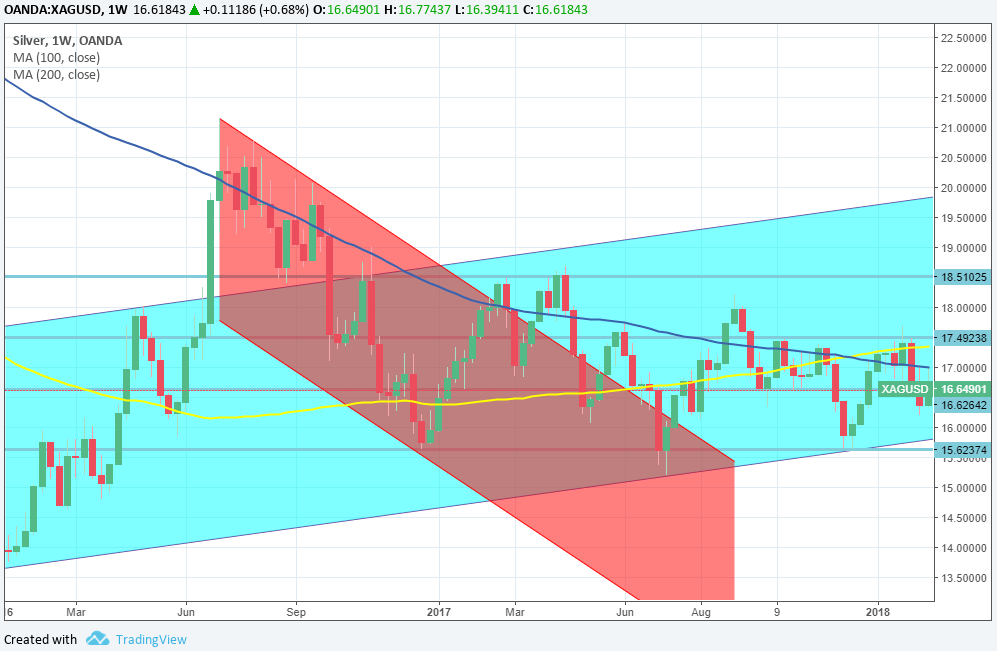 The metal closes the week to same level of the previous week with an almost imperceptible removal. The greatest obstacle is at he moment represented by the "wall" of the 1000 $ /oz.s Nevertheless, as it is deduced by the underlying graph, the metal has punctured to the up the channel bear that held the quotations under pressure from different months. The spread with the palladium has disappeared (we remember that had overcome the 150 dollars) by now. From the point of view of the fundamental ones we confirm that the escorts monitorates from the NYMEX have been to the lowest levels since 2016 to this part: a signal decidedly rialzista that underlines the renewed interest for such metal. 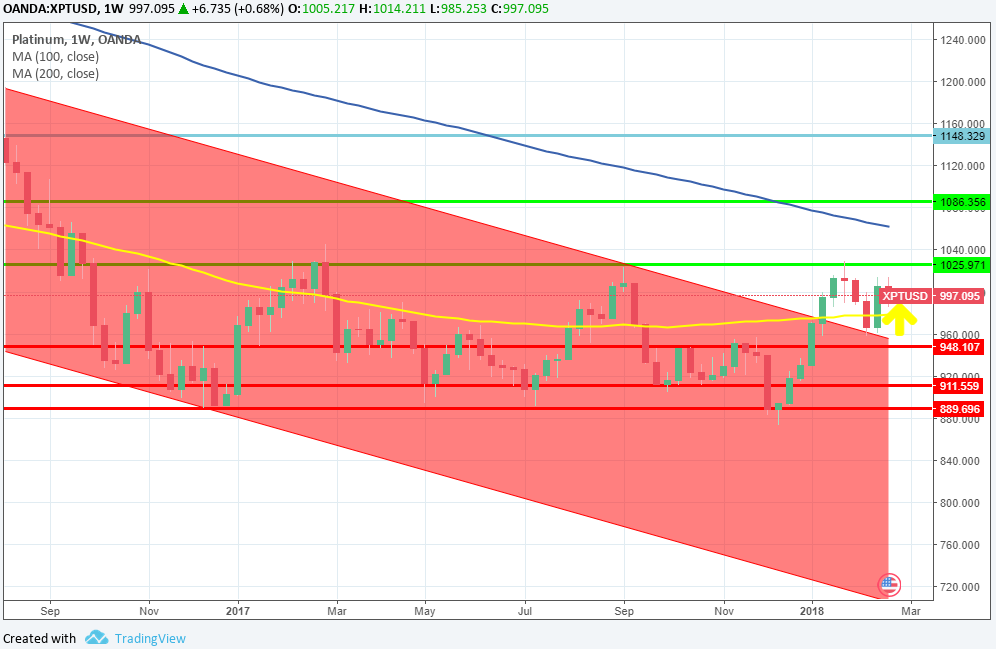 After 4 consecutive weeks of sales the metal returns to be bought by the operators that have evidently looked at the area 950 $ / oz as a good occasion of purchase. Obvoiusly the fundamental ones continues to be positive and to confirm this we can notice as to the technical level the trend still decidedly toward the up. Currently the first resistance has been given upward at 1100 $ / oz and subsequently at 1150 $ /oz.s The supports (red lines on the graph) are instead at 1000 dollars, 950 and 910. Only a descent under the 900 $ / oz could reverse the trend. 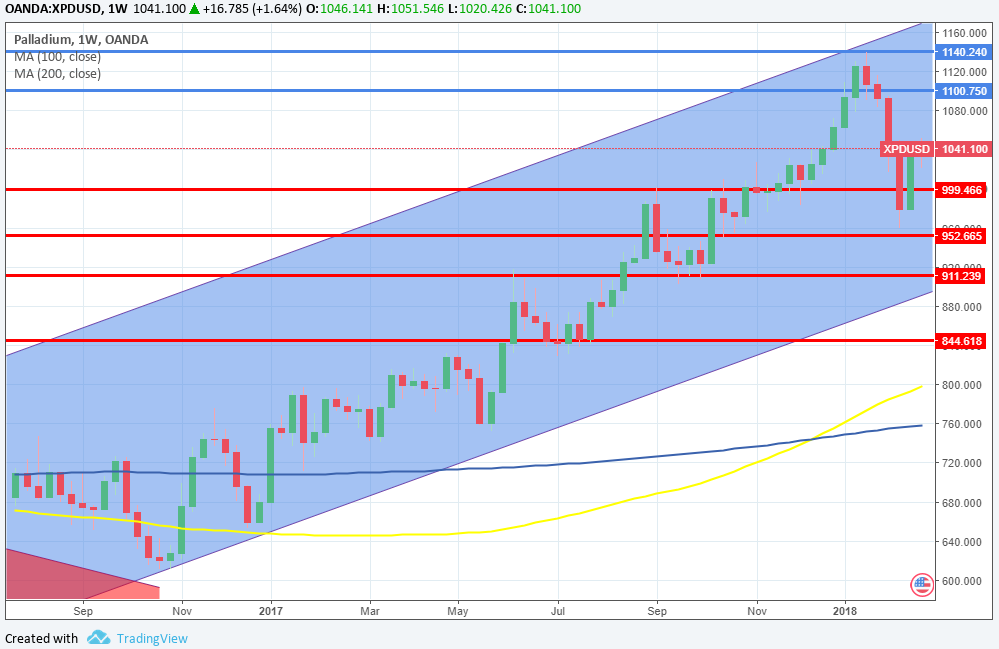 The change is stable in area 1,22. 1,25 and it seems that try an experimenting phase of consolidation. Nevertheless, the recent declarations of Draghi around the excessive strength of the European one and the imminence of the Italian election (kind in case of victory of parties not properly for-Euro) elections could bait a prudent run to the coverages. Difficulty to say if such scenery could be in turn able to capsize the trend toward the up. At the moment the outlook is neutral. Decisive, the next political developments. Upward the obstacle to be overcome are the 1,25 while downward we are finding numerous supports: 1,22. 1,20 -1,18 and finally 116. 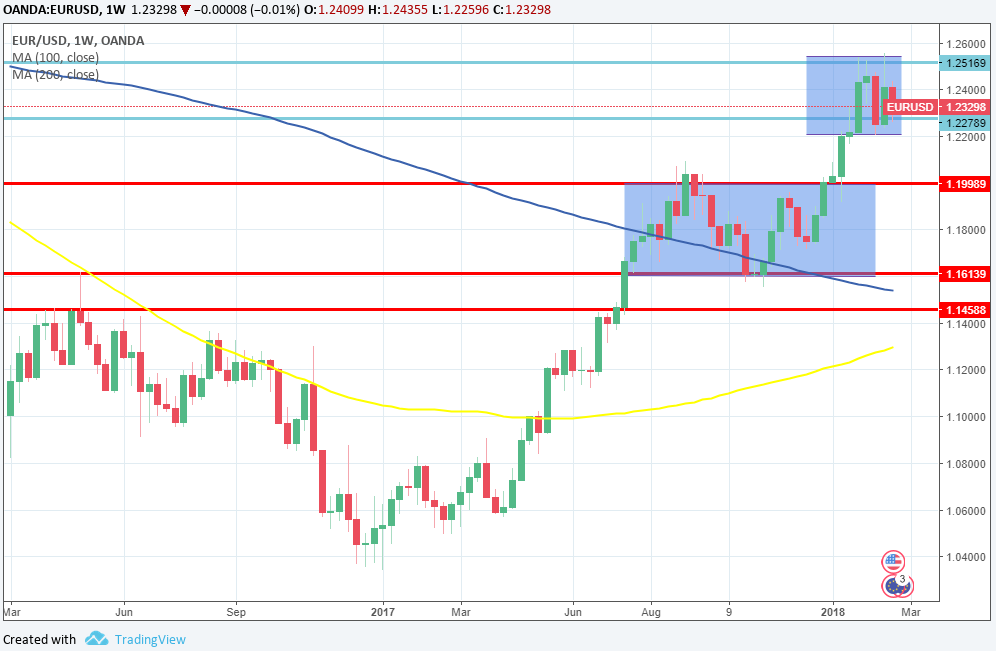