The new customs duties announced by the Trump administration on steel and aluminum imports were the main drivers of the stock exchange week. Reactions are very hard, not only on the markets but also and especially in the European Union, infact the President of Commission Jean-Claude Juncker has not hesitated to define the USA move "a brazen intervention to defend the American industry" . Luxembourg continued its intervention by affirming that "Europe will not remain immobile while the industry is hit by these unjust measures that jeopardize thousands of jobs" - threatening to react "firmly and with a measure to defend our interests ". Specifically, the new trade restrictions, which will take effect from next week, provide for the adoption of a 10% tariff on aluminum imports and 25% on steel imports. Also during the week there was the audition in the Senate by the governor of the FED Jerome Powell. The number one of the American central bank has tried to reassure the markets about the next steps that will be adopted by the FED (back from a first speech in front of the Congress rather disastrous that had triggered sales on the price lists). The outcome of his speech was however rather uncertain, due to the conflicting messages that have been misunderstood by the operators. In fact, while Powell said he was in favor of 4 increasing rate during the 2018, in his last speech he made it clear that there was a rise in the salary , but not in inflation. The Governor then added that the US economy "is not overheating" and therefore - at least in theory - four increases are perhaps excessive. However, to confuse the minds of the operators, it was the reference to the tax reform of Trump, which - again according to Powell - "will put pressure on the demand, which in turn will put it on inflation". Meanwhile, the odds of 4 rate hikes have risen from 28 to 35%. Despite this, the dollar continued to lose ground especially against the Japanese yen and the Swiss franc, while it appreciated on the euro (the latter being traded by operators due to fears triggered after the announcement on duties) .

Regarding the price lists, the month just ended - despite the good macroeconomic data from united states(with the unemployment at the lowest levels since the '70s) - was a month to forget: the performance was the worst since 2 years . Well, but not very well, the European data on manufacturing activity: The PMI index for both individual European countries and for the Eurozone has showed a slight decline in economic activity, while remaining far from troubling levels.

During the week the yellow metal (accomplish the good data on the American labor market and the prospect of 4 rate increases by the FED) has undergone significant downward pressure. Therefore, the price went to test the first strong support in the area of ​​1300 $ / oz, only to recover and return to the area of ​​1320 $ / oz. At this point, it is quite likely that the operators interpreted the failure to break the upside of $ 1360 / oz as a double maximum period. Although the metal continues to oscillate above 100 and 200 days moving averages, the technical picture is, in the short term, neutral and without too many operational ideas. To bear the price, however, there were recent declarations on the duties concerning imports of aluminum and steel in the United States that put the markets on alert. 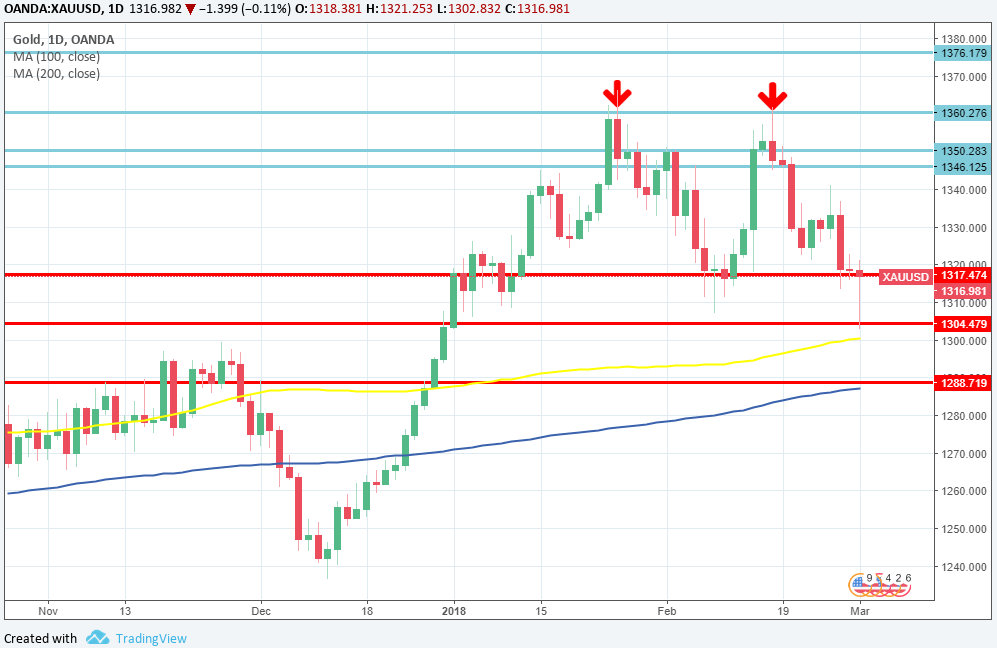 The outlook is also neutral on the weekly chart. The metal remains above 100 and 200 days moving averages and continues to oscillate in the bullish channel that started in January 2017. The $ 1300 / oz area should be monitored with some caution: a downside breakdown of the latter could trigger further sales, although on the fundamentals side prospects (both for the current year and for 2019) remain bullish. The recent turbulence on the markets (February was the worst month in two years) supports the price and counterbalances the fear of hypothetical interest rate hikes both in the United States and in Europe. 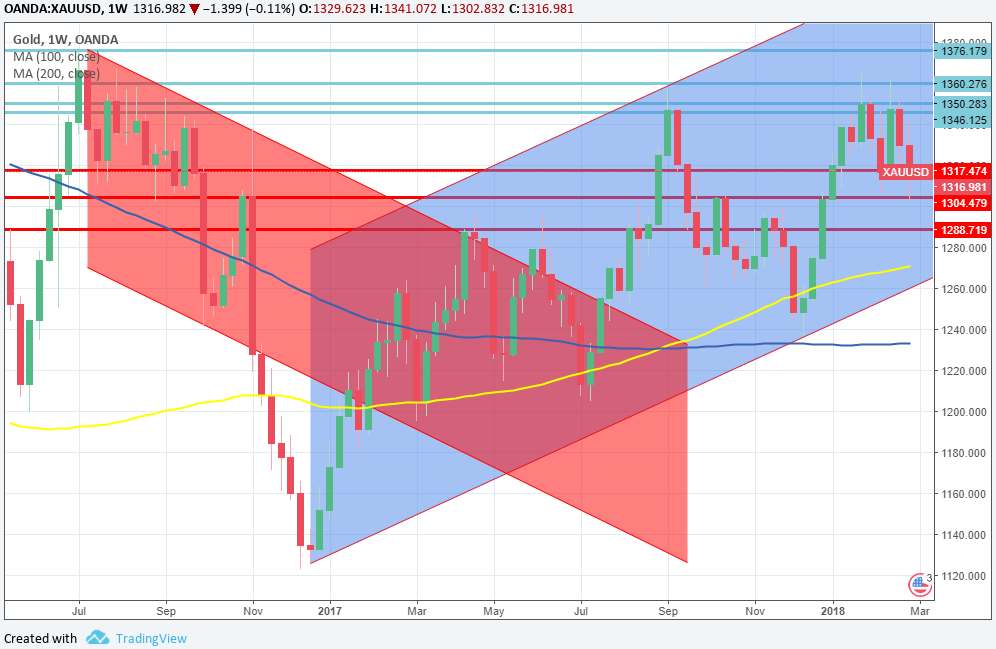 Silver continues to experience a period of price squeeze. The latter struggle to leave the 16.40 / 16.50 - 17.50 $ / oz range. This lateral phase has been increasing in recent weeks (increasingly narrow range) and is likely to be close to conclusion. The prices currently travel below the 100 and 200-day moving averages, so the outlook is negative. Carefully monitor the two sides of the triangle in formation: the breakthrough of one of the two usually triggers a strong directional movement (bearish or bullish depending on the triggering drivers). 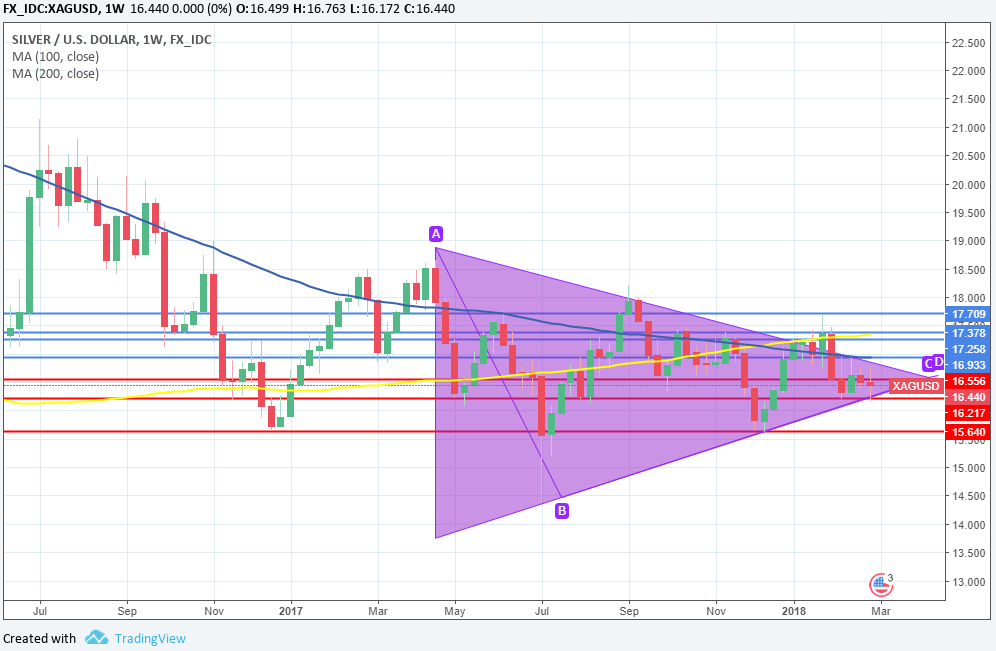 The metal has not passed the "wall" of 1000 $ / oz and loses a 40ina of dollars settling at about 950-960 $ / oz. Although the price of metal has pierced upward the downtrend channel that has been holding it under pressure for several months, it is still too early to say that we are in a long-term uptrend as quotations are still below moving averages at 100 and 200 days. The spread spreads again with palladium (last week it was close to zero, unlike the 30 dollars recovered in today's week). The phase, as can be seen from the graph below, is lateral (see orange band) and currently does not offer operational ideas. 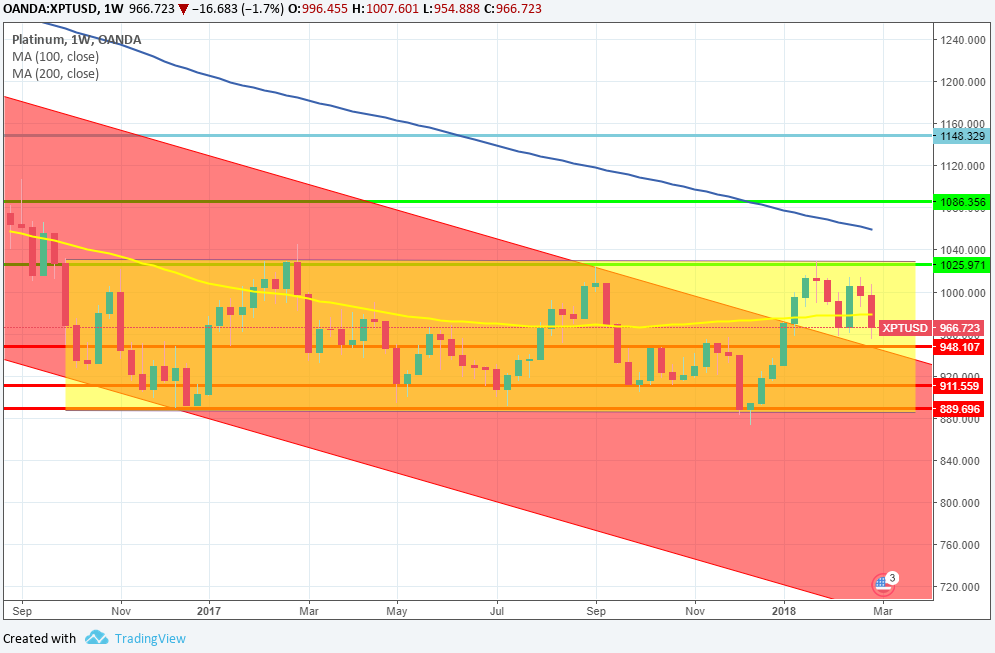 The obstacle of 1050-1060 $ / oz proved to be an insurmountable barrier to metal prices. The rebound that had made us hope for the start of the week quickly died out and the bears got the better of the bulls. Although it is backed by good fundamentals, the metal has lost some interest from investors who are likely to expect more favorable prices to return to buy again. The trend is bullish and only a fall below $ 950 / oz could trigger a strong change in sentiment. The next data on the car sales market could provide new elements to better ponder the operation. 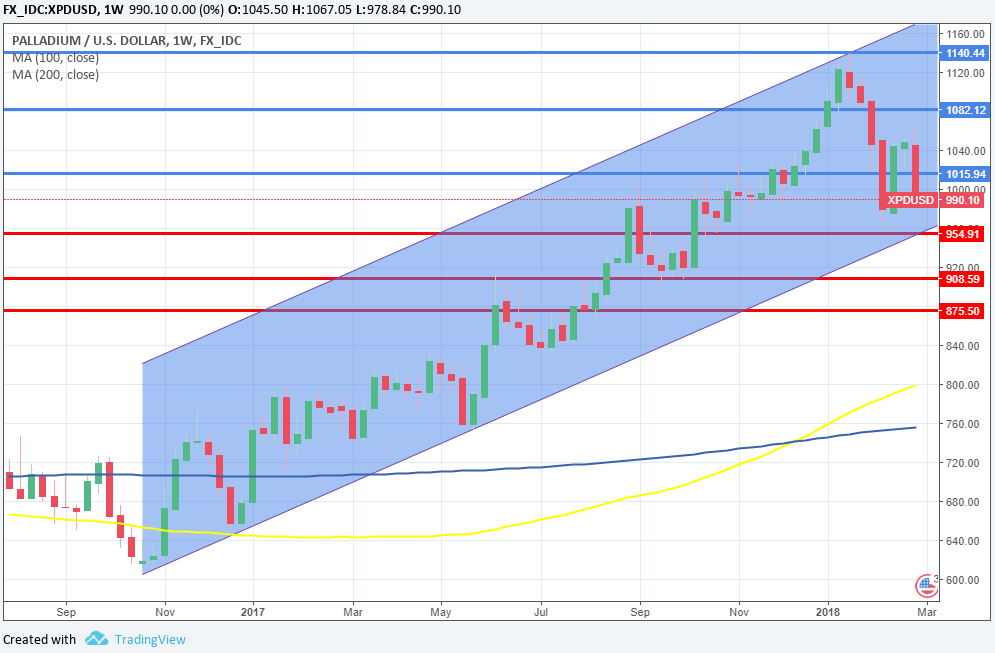 The change seems intent on not abandoning the rectangle in which it oscillates from a month and a half to this part (1.21 - 1.25). Despite the tariffs announced by Trump (which would heavily affect European industry), after the first wave of sales, the euro immediately returned to be interesting in the eyes of the operators, especially in a market phase as delicate as the one experienced in the month of February. At the moment the outlook is neutral and the exchange rate appears fairly balanced. Decisive, as mentioned in the last report, the next political developments (primarily the Italian elections to be held Sunday, March 4). Upwards the obstacle to be overcome remains the 1.25 threshold while downwards we still find the usual supports: 1.22 - 1.20 -1.18 and finally 1.16. 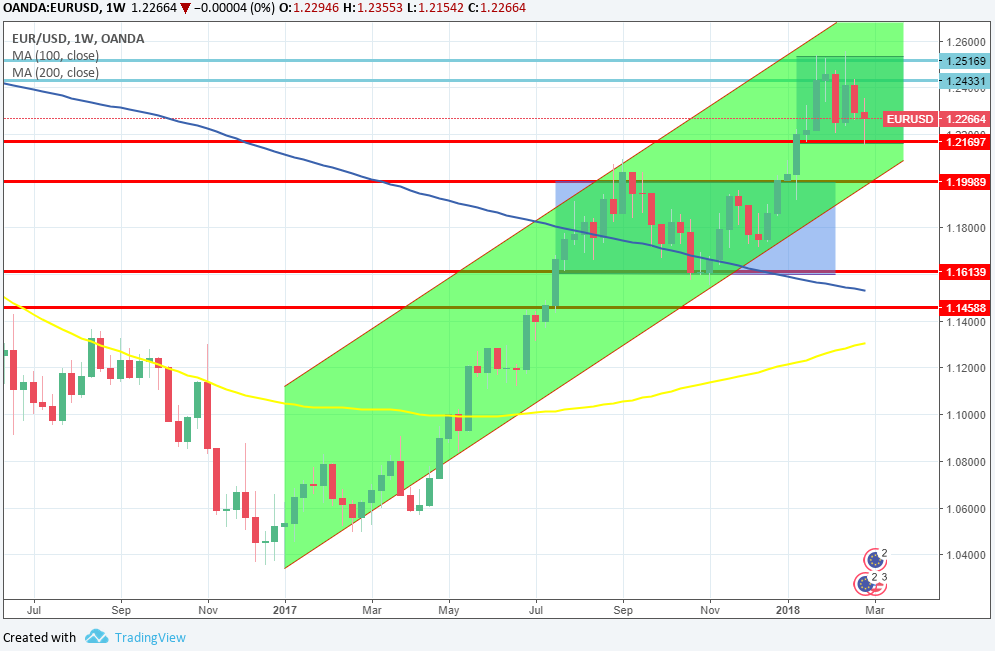 Italpreziosi S.p.a. does not guarantee any results related to information, publications made and present in the news, or assumes no responsibility for the outcome of any financial operations performed by the user. The user expressly declares that he understands that access to the information on the site does not represent a solicitation to buy or sell financial products and that any resulting operational decisions are taken in full decision-making autonomy and at their own risk. By virtue of these terms of use, no liability will be incurred by Italpreziosi S.p.a. for losses, damages or lost and / or lower earnings that the reader would suffer as a result of the execution of operations carried out on the basis of reading the news.