We cannot declare victory yet [on the inflation]: these were the words pronounced by the president of the BCE Mario Draghi during the last meeting of the Eurotower making therefore to intend that the QE will continue in the same formalities with which has been carried on until today, still leaving the rates of interest to the present levels for much more time. The only change found in the press release regards the forward guidance. In fact, inside the statement, the sentence (present in all the previous statements) in which is stated that the purchases of stocks could speed up the pace in case "the perspectives become less favorable" has been removed. The number one of the BCE wanted to reassure the markets anyway, adding that the purchases will still be extended in the event that the inflation should not extend towards the 2% target. This last target seems to be - at present- very far away, considering that the estimates of the institute see the inflation for 2018 and for 2019 stuck to the 1 ,4% and then go up to the 1,7% in 2020. The worry triggered by the latest Donald Trump’s protectionist measures has not gone unnoticed, as well as the fears of a too much high exchange rate of euro dollar.

And just about the activation of the duties regarding the import of steel (taxed at 25%) and aluminum (taxed at 10%) within the American land, the Trump’s government, during those last days, wanted to show a certain flexibility especially towards the allies "prepared to deal." In particular Mexico and Canada have been exonerated indefinitely from the aforementioned duties, both busy counties to renegotiate the agreement of free North American exchange (the so-called NAFTA) that has recently been object of more marked controversies from all the involved actors. According to rumors Australia would also be able to speared shortly, as well as other not well-known commercial partners defined "true friends”.

Eventually, still from overseas, a good news regarding the relationships between United States and North Korea: a South Korean delegation, formed of the safety adviser Chung Eui-yong and the head of the secret services Suh Hoon would have delivered directly in the hands of Trump a letter signed by the North Korean leader Kim Jong-un, in which the Northkorean man consideres himself ready to meet the American president to not only speak about the cessation of missile tests but also about the absolutew nuclear disarmament.The markets have reacted well to the news: one averted nuclear crisis has in fact raisedf the spirits of the operators that dedicated themselves again to the stock (especially USA) one they sold typical refuge goods such as precious metals, Euros and Swiss francs. On Friday eyes aimed at the data concerning the USA working market.

During the week the yellow metal loses a bounch of dollars compared to the previous week and it continues to oscillate in the area 1320 $ /oz.s The price is fixed above the moving averages at 100 and 200 days but the technical frame stays neutral. The worries concerning the commercial duties on steel and aluminum became partly less (especially following the Trump’s mentioned flexibility) and even the stresses between United States and North Korea have decreased, after the latest utterances that would loke a meeting between the two leaders in order to discuss about the disarmament. The relatively weak dollar remains to supportthe price of the metal. Further rebates cannot be excluded that, in the long term, they would be able to be seen asoccasions of purchase if the negotiations among the two parts would not take the desired twist. 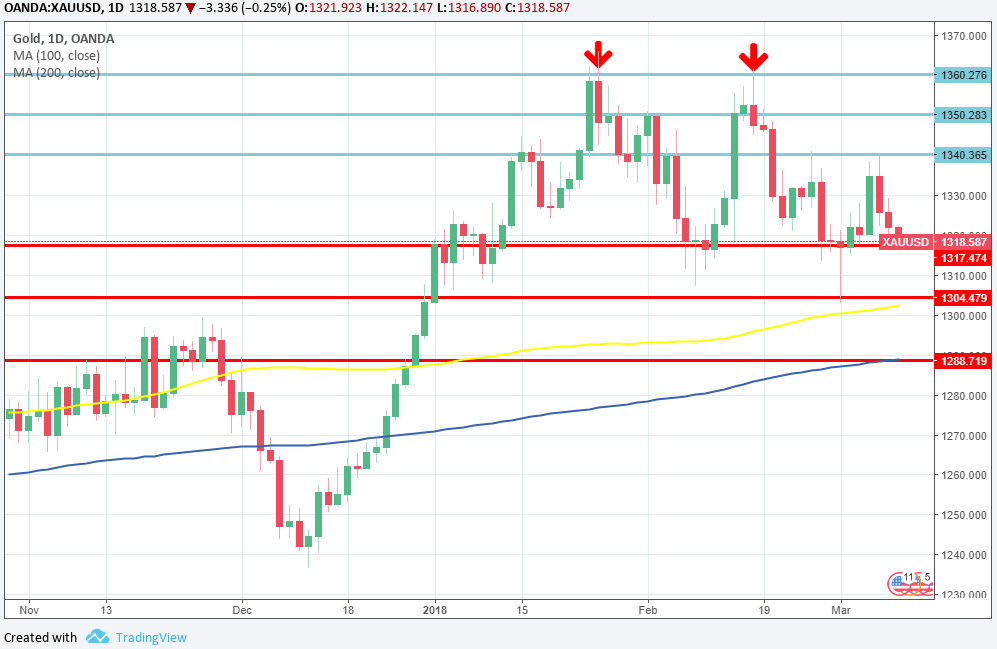 The outlook stays neutral even on the weekly graphic. The metal remains above the mobile averages to 100 and 200 days and continues to fluctuate in the bullish channel started in January 2017. Nevertheless, the missed breakthrough of 1350 $/oz doesn't leave space for further bullish ideas.

The area to be considered stays the one of the 1300-1310 $ /oz: a breakthrough down of this last mentioned area could trigger further sales. Eyes aimed at the American microdata: a degradation of this last ones could push the dollar more down making the purchase of precious metals very tempting. 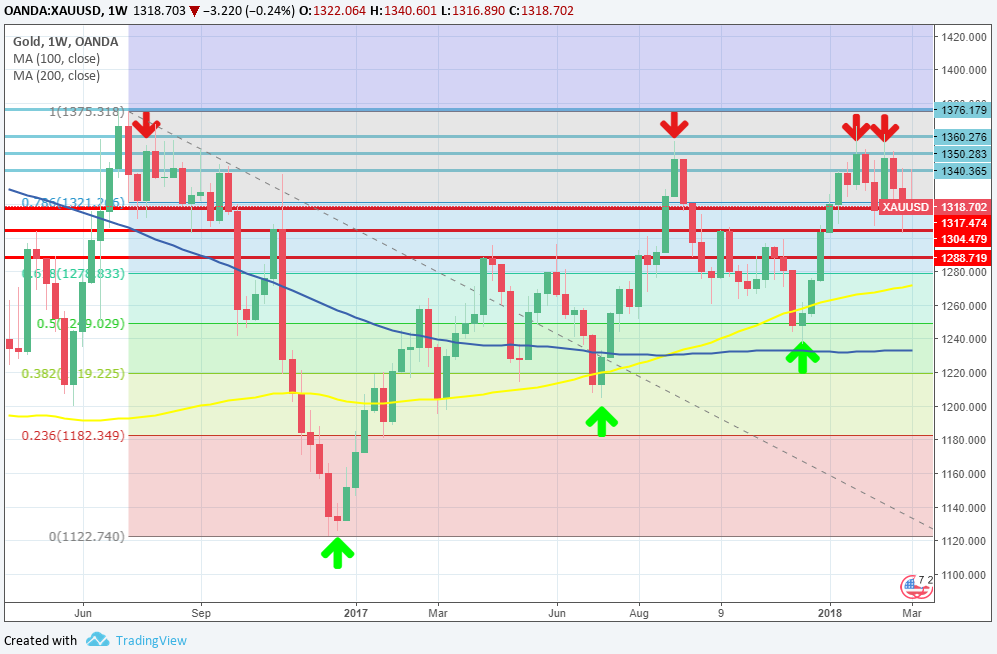 Also this week the silver remains compressed in the triangle that forces the price to stay in a scarce range (16,40/16,50. 17,50 $ / oz). Such stage seems to be closer and closer to its own conclusion. Due to the fact that, at present, the quotations are going below the mobile averages to 100 and 200 days, the outlook is negative. The two sides of the forming triangle must be monitored very carefully: the breakthrough of one of the two it is usually to start a strong directional movement (bearish or bullish according to the unleashed drivers). 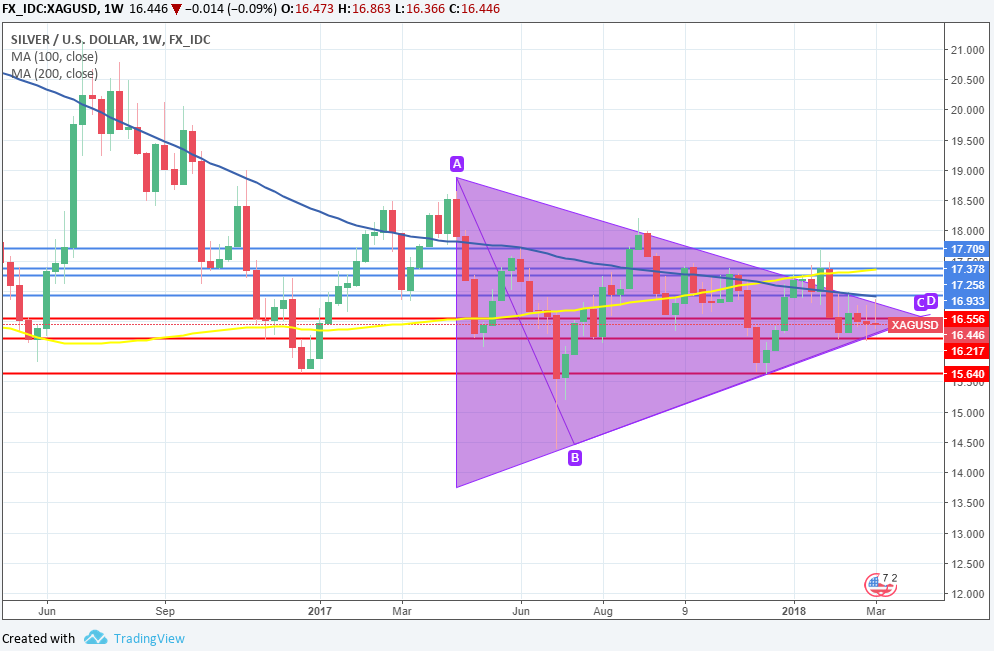 The missing breakthrough on their upside of 1000 $ /oz it has probably been interpreted by the operators as a double maximum. During the week the metal has still been a matter of strong sales and it leaned on the first important support at around 50 dollars from the maximum ones to the minimum ones of the period. The quotations (that travel in this "middle earth") are still below the mobile averages at100 and 200 days. The spread with the palladium is valued around 30 dollars per ounce. 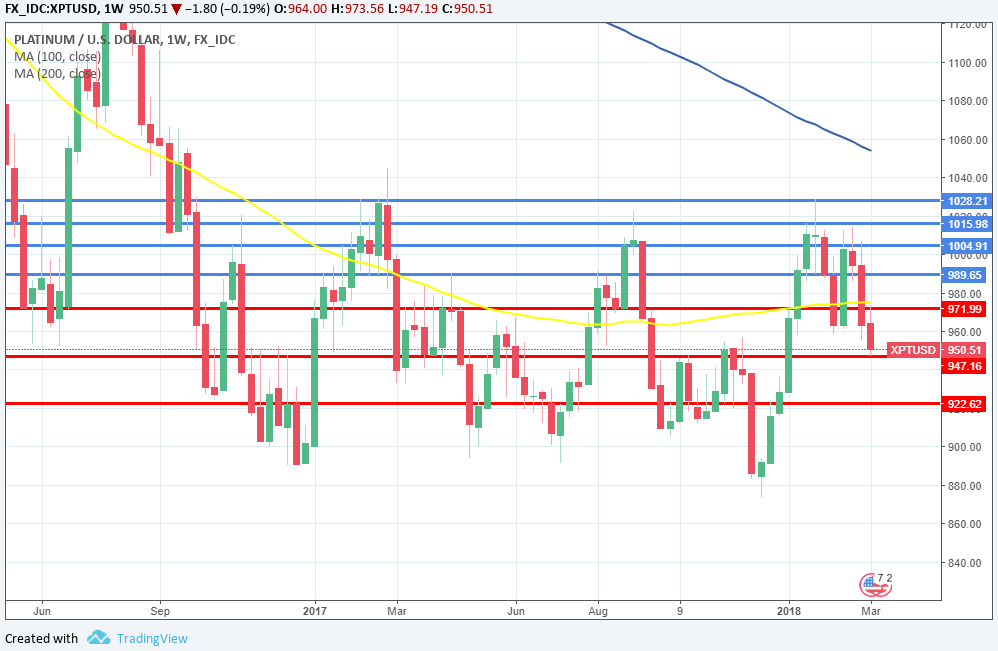 Also the palladium, as the whole sector of the precious metals, has been an object of sales. The price has made a will for the third week the support in area 950 $ /oz.s The trend continues to be bullish although, as already said in the previous report, under the 950 $ /oz could cause a strong change of sentiment. During the week, regarding palladium and platinum, some fears linked to the latest duties changed by Trump’s government have begun to gravitate: some analysts are scared that the aforementioned duties could be also extended to other metals for industrial use (in fact platinum and palladium are used in wide staircase by the automotive industry). 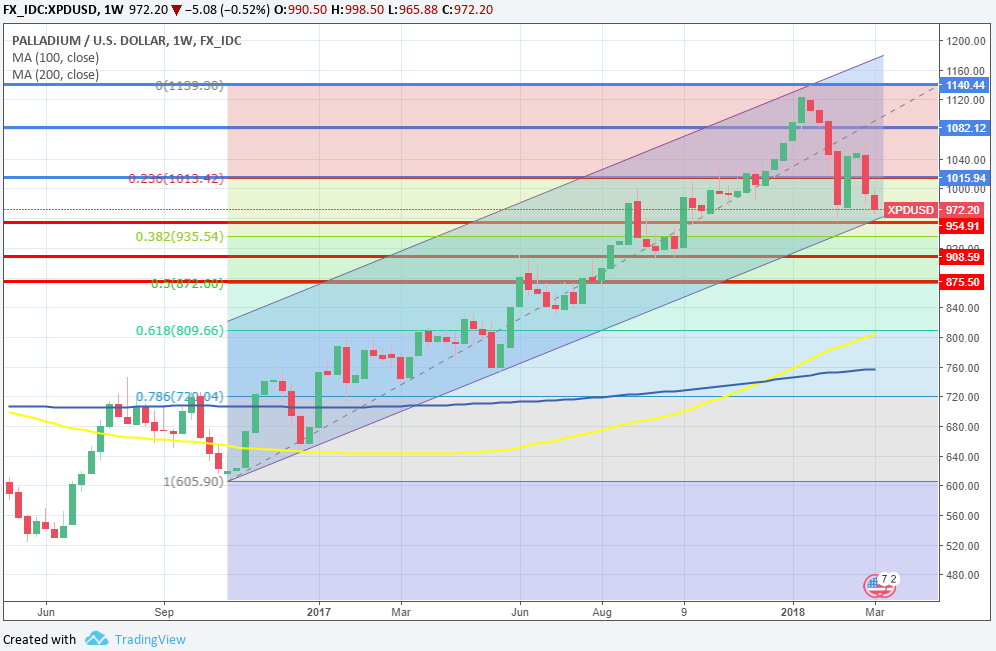 Even this week the change remains stuck inside the rectangle in which it has been going up and down since one month and a half now(1,21. 125). At present the outlook is neutral and the rate of change appears rather balanced. Upward the obstacle to overcome remains the threshold of the 1,25, while downward we are still finding the usual supports: 1,22- 1,20 -1,18 and finally 116. 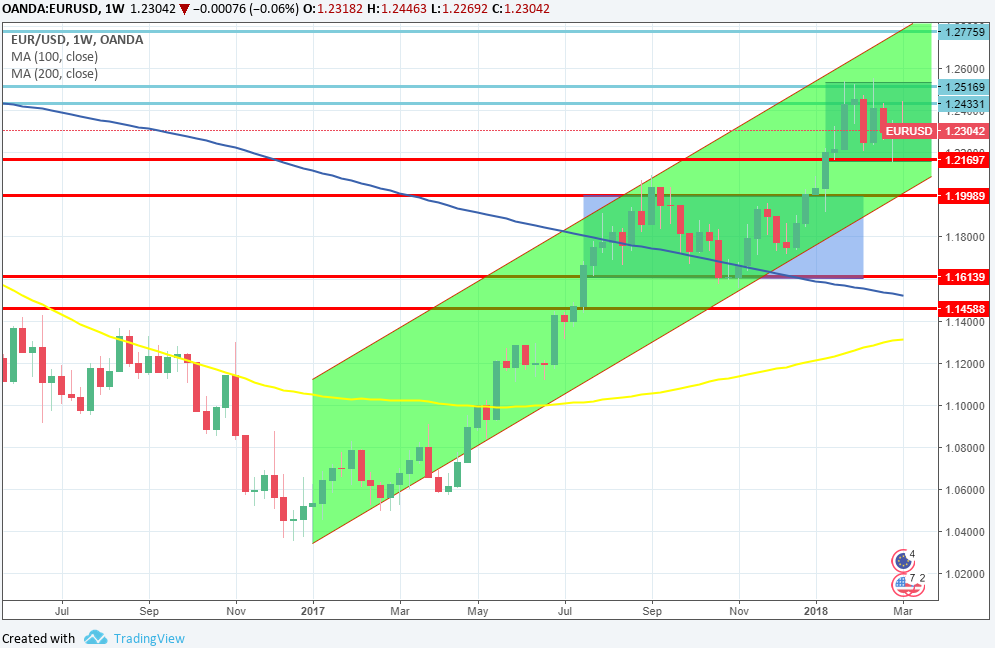