The week on the markets has been rather quiet despite the fact that ,Overseas, the commercial war which has as main characters the USA against the rest of the world, is still going on. And to make matters worse, in Washington the problems within Trump’s administration never seem to reach an end. In fact, after another dismissal- this time was the turn of the Secretary of State Rex Tillerson- rumors would like that on the plate must be another important head ready to jump, which is the one of the adviser for the national security Mc Master. The White House has denied the aforementioned rumors, the fact is that in this closing day the markets seem to be rather quiet. And still on the political matter, the tensions between United Kingdom and Russia are becoming worse. According to London, Russians would have poisoned - using a chemical agent- an ex-spy of Moscow (and his daughter) who got away on the British ground. Other nations, such as France, Germany and USA, took part at the voices condemning the gesture.

Going back to Economics, the data regarding the inflation in the Eurozone (published during the day on the 16th of March) disappoints the analysts: in front of an expected 1,6% the recorded inflation registered in February has been of 1,3% at the minimum since December.

Regarding the precious metals, the week has been negative almost for all the compartment: gold, silver, platinum and palladium had recorded a loss compared to the previous week, when the metals had tried a small recovery. Partner in the loss is the rediscovered strength of the dollar, which, especially against the Euro, has gained field. The exchange rate is going, at the moment, around the 1,22.

The performances of stock lists are conflicting: the week has been negative for the USA ones, but relatively positive for the European ones. The DAX emerges among those last ones, especially thanks to the freeway given by the Bundestag to Mrs. Merkel in order to form her fourth consecutive government. The chancellor will govern with the - already proven formula- Große Koalition together with the Social Democrats.

Eventually, the negotiations within the parties are going on to decide which will be those who will be at the helm of Italy. At the moment, games are still going on and we are not allowed to know who will be at the government and who, instead, in the opposition. However, the markets do not seem particularly worried .

A bad week for the yellow metal that breaks through a quiet important bullish trendline and it stucks itself a little bit higher the 1300 $/oz. The price is reaching more and more the mobile averages at 100 and 200 days and a possible test of those two, at the moment, is not a remote possibility anymore. The technical framework remains neutral. To support the metal price there are the aforementioned geopolitical tensions between United Kingdom and Russia, to whom were added USA, France and Germany. However, further decreases are not to be excluded that, in the long term, could be seen as occasions of purchase, in the case of a deterioration of the international geopolitical framework would happen. 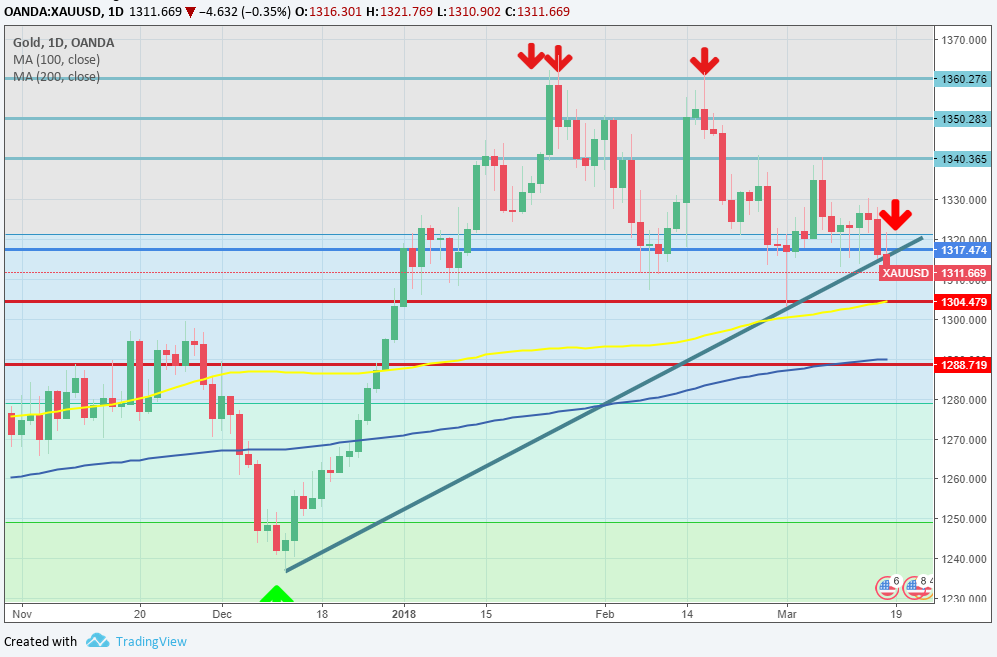 Even on the weekly graphic the outlook stays neutral. The metal remains much more higher than the mobile averages at 100 and 200 days and it continues to swing within the bullish channel started in January 2017. However, the missed breakthrough of the 1350 $/oz does not leave any space to extra bullish hints. The area to be monitored remains the one of the 1300-1310 $/oz: a downside breakthrough of this last one could trigger more sales. Eyes fixed on the macroeconomic American data: if those last one disappoints the analysts’ expectations, the dollar would take the consequences of it and it would remove the rate hikes expected during the current year. 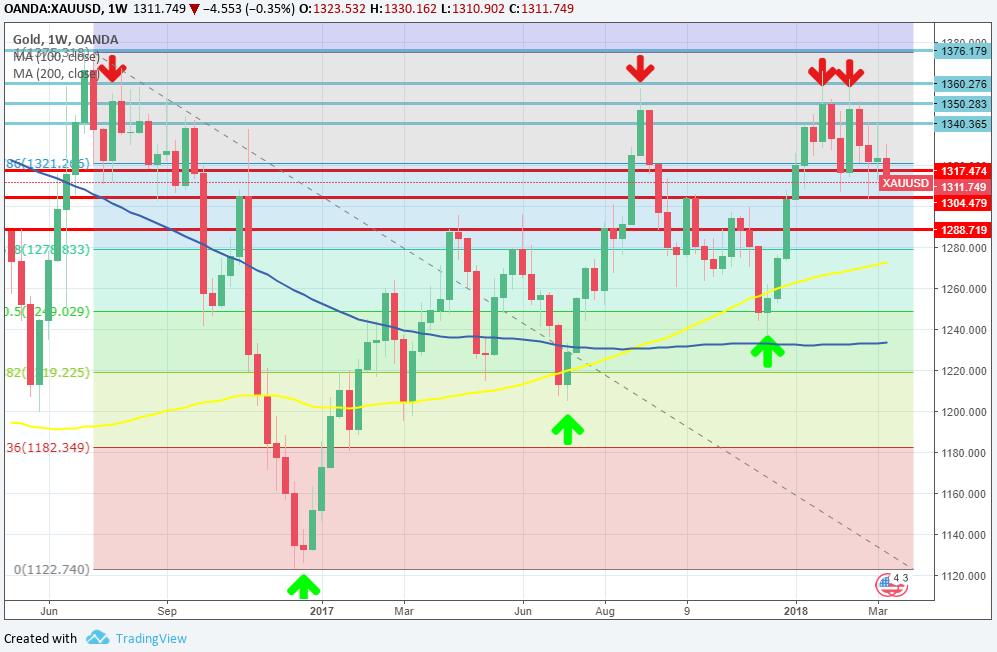 Even for this week the silver remains compressed within the triangle which obliges the price in an extremely small range (16,40/16,50- 17,50$/oz), even though, at the moment, a first important test is ongoing in the inferior part. At present, the quotations are going under the mobile averages at 100 and 200 days and the outlook still continues to be negative. As already said, the two sides of the forming triangle must be monitored with attention: usually the breakthrough of one of the two is to trigger a powerful directional movement (bearish or bullish according to the generated driver, in this case a bullish one). 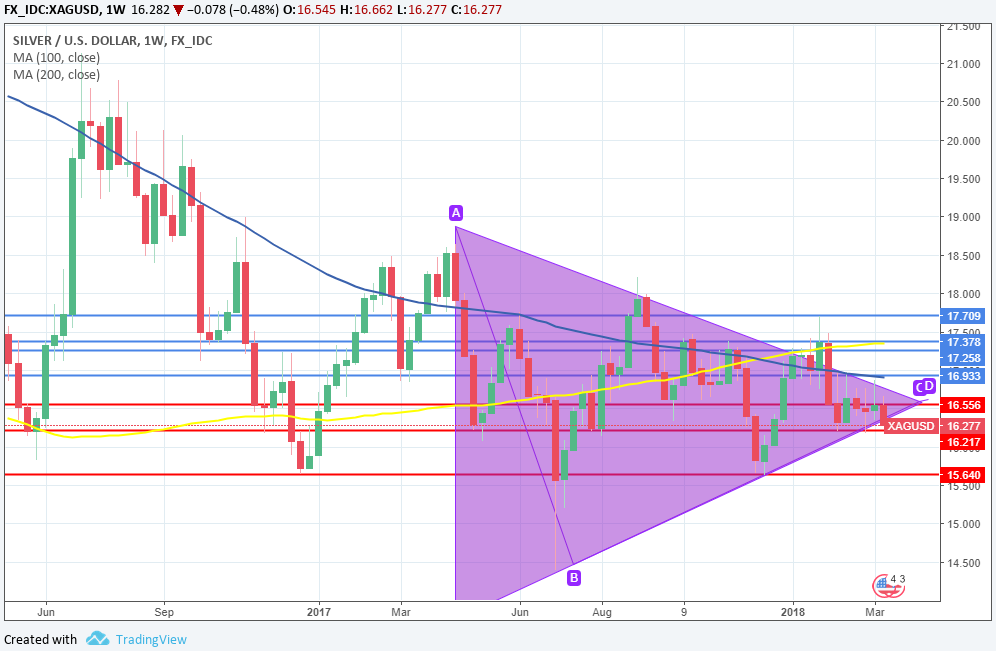 During the week the platinum goes back under the average at 100 days and it leans on the support in area of 950$/oz which coincides, moreover, with the most external side of the bullish channel. The outlook is neutral, even though the missing overtaking of 975$/oz, for sure, it is not a good luck for the quotations. To be monitored, during the next week, the probable return to the bullish channel. In this case the outlook would become negative. 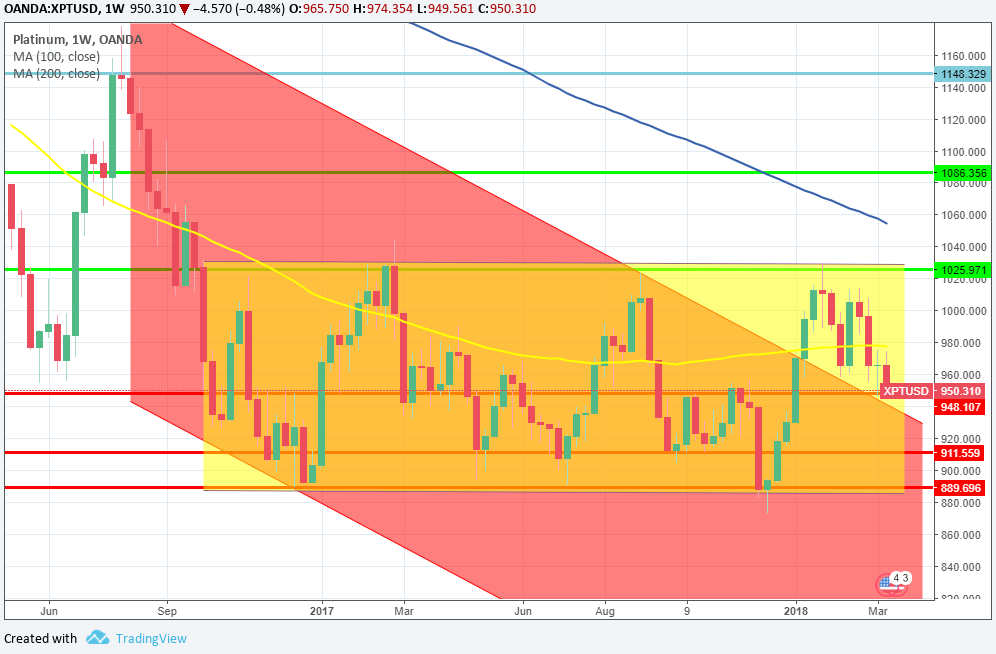 Small losses the ones recorded this week by the palladium, always on the way to the fears that turn around the latest duties changed by Trump’s government: some analysts are scared that the these duties can be extended even to other kinds of metals for industrial use (platinum and palladium, in fact, are used on a large scale within the automotive industry). The metal tested the inferior part of the bearish channel and it has rebounded up to test the critical level of the 1000$/oz. Now the framework- sustained by good fundamentals- it is still bearish. However, the evolution of the recent bullish movement it has to be monitored. 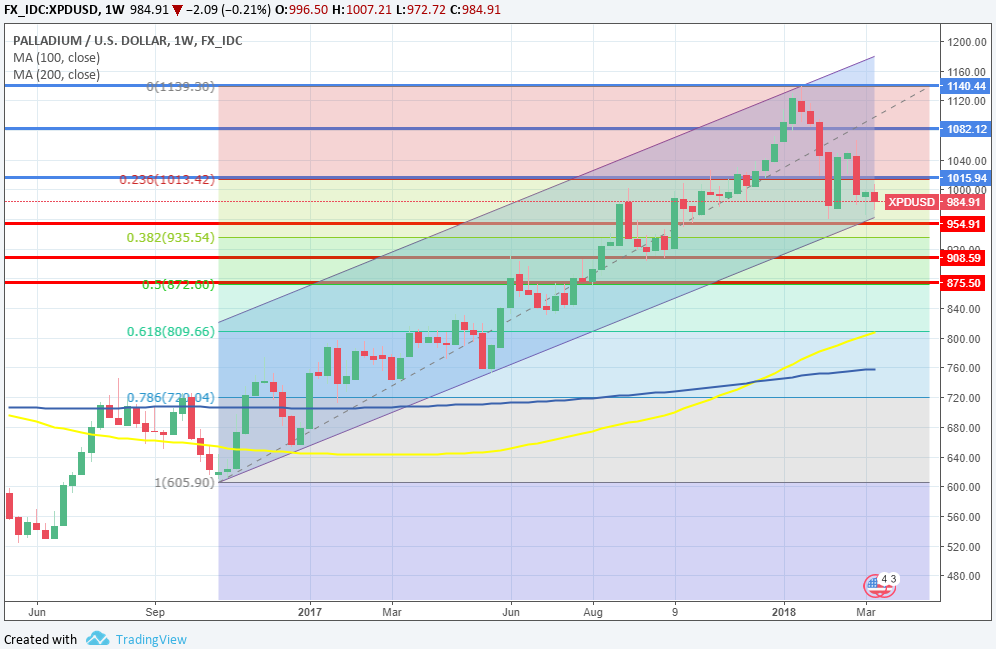 Yet another week of stay within the box of 1,20- 1,25 for the exchange rate of Eurodollar. The outlook is neutral, even though the rate goes much more over the mobile averages at 100 and 200 days. Towards the top, the obstacle to be overcome remains the threshold of the 1,25, while towards the bottom we still find the usual supports: 1,22- 1,20- 1,18 and finally the 1,16. 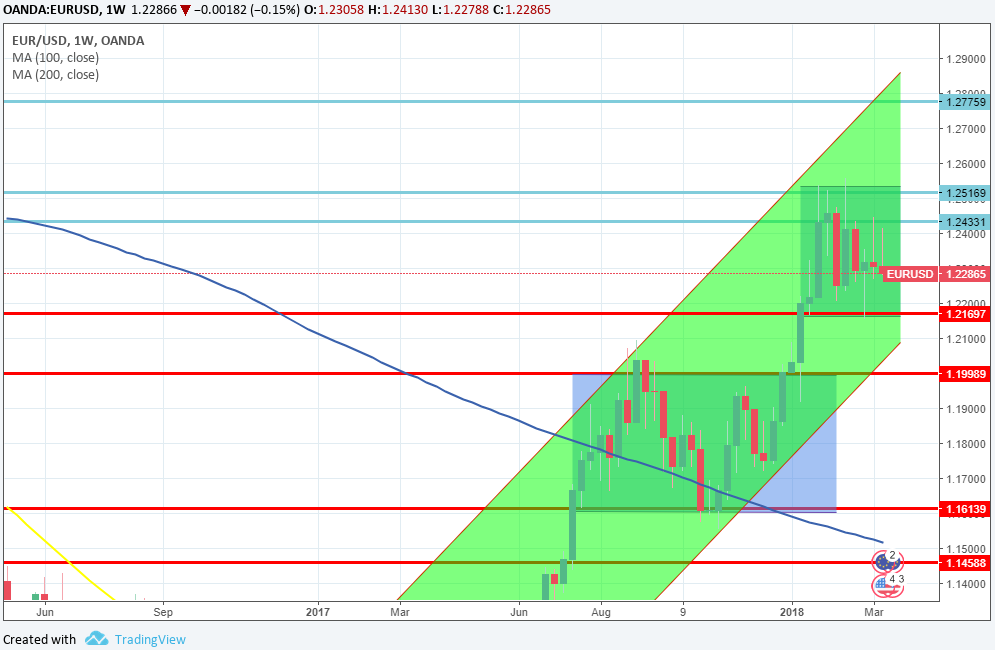