Even for this week the tones between USA and China have continued to become worse, raising some apprehension in the world stock markets. The last step of the, now obvious, commercial war between the two super powers has been made by Trump, who – during last Thursday- has given a mandate to the Office of the Commercial Representative of the White House to identify further custom duties related to 100 billion of dollars on the Chinese imports. Trump justified this act as an answer towards Beijing, this last one guilty- according to the President of USA- to have threatened custom duties on the American imports. To remember that China has reacted, to the announcement of the first USA custom duties on steel and aluminum, with a counteroffensive similar to the American commercial offensive (that is to tax 106 among the agricultural and industrial products imported by USA, for an equivalent of approximately 50 billion. of goods).

However, if on one hand Trump seemed to close himself to the world commerce, on the other hand the President still continues to consider himself open to the dialog and negotiation. An example for this case is given by the recent announcement regarding the NAFTA (the agreement of free North American exchange): the administration was optimistic about the renegotiation of terms, leaving to hear that not all the doors- commercially speaking- need to stay closed.

Despite the Trump’s “possibilist” attitude, the stock markets have not welcomed in a good way the abovementioned escalation: the worries regard the fact that the commercial prices can expand very quickly including many more sectors. Immediately after the announcement, the world index have, in fact, started to lose ground: mainly affected by the sales are the automotive sector and the mining sector.

Even in Europe the situation is followed with a lot of concern and to prove this we just need to report the attendance of the member of the Executive Board of the BCE Benoit Coeure: the main banker has warned from the dangers that Trump’s commercial politics could set out on the markets, making even worse the weight of the crisis on the shoulders of the central Institutes .

Despite the growing worries regarding the ongoing commercial war between USA and China, during the week the metal has recorded a lightly negative performance. The reason of that must be found in the rediscovered (relative) strength of the dollar which penalizes, once more, the primary sources listed Overseas. Anyway, the price still goes much more higher than the mobile daily averages at 100 and 200 days. The trend is on the side: to be monitored the support in area 1300- 1310$/Oz and the resistances at 1345$/Oz and later at 1375$/Oz. To be reported the inflow of investments of the ETF in physical Gold that have touched a record since 5 years ago so far. The detained quantity of ounces has reached- according to what Bloomberg reports- the 73,2 million. 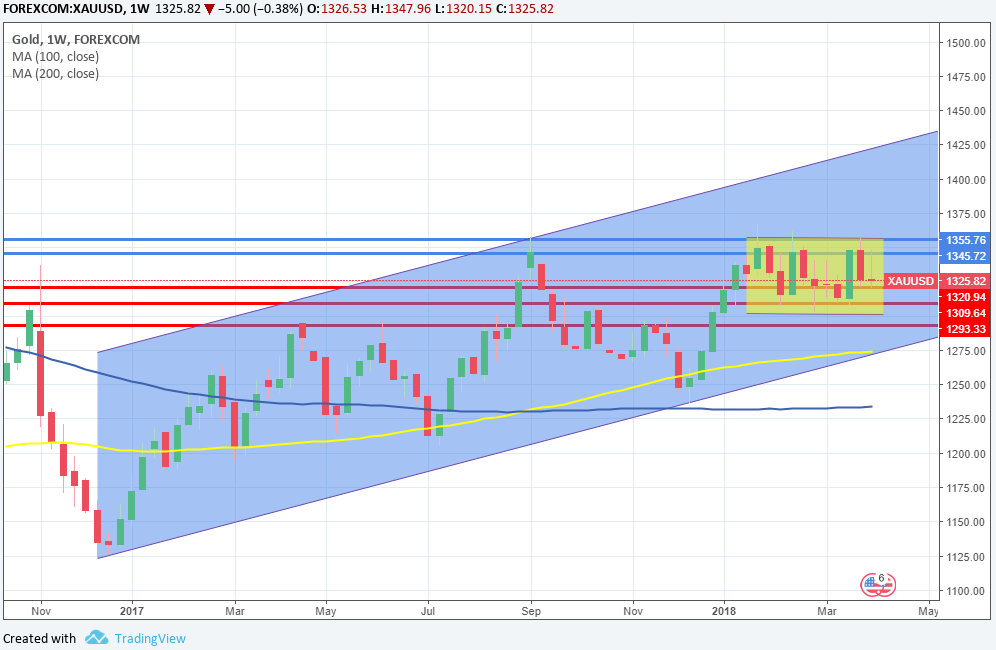 Second week of flat calm for the silver. The price of the silver is still imprisoned (for the tenth consecutive week) in the area of 16,10 – 16,90$/oz, showing a week interest from the investors. The trend stays bearish and at the moment drivers sufficiently strong to take a net direction toward the market are not visible. On the technical level, just a cruck in the area of 17.40 – 17.50$/oz (so much more above than the weekly averages at 100 and 200 days) it could generate further stretches up to the test of the strong resistance put in the area of 18.50$/oz. 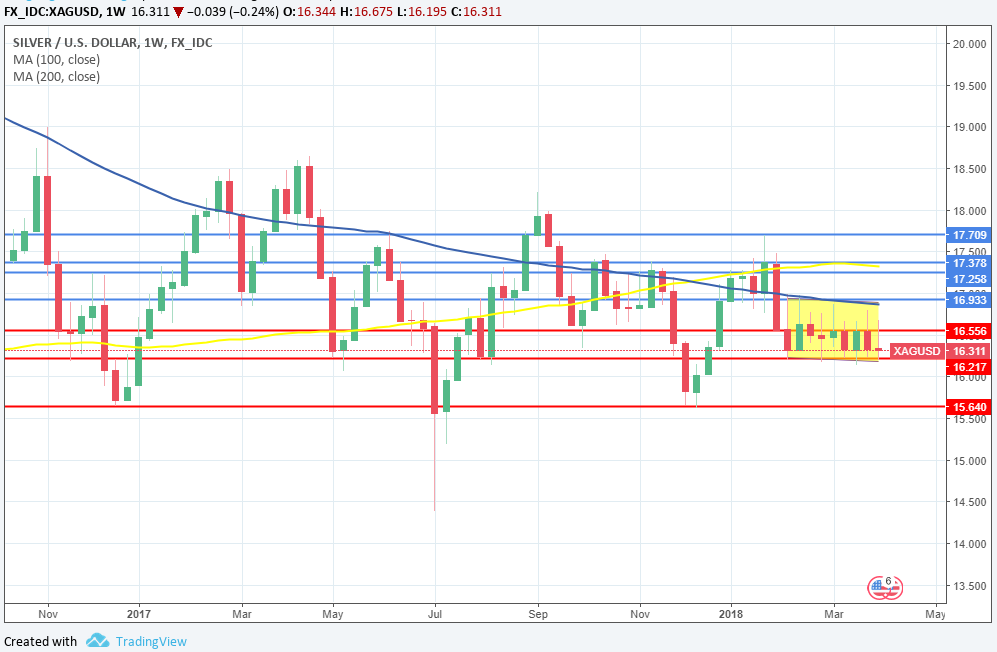 The run to the decline is ongoing for the platinum, after the strong bullish momentum that characterized the prices during the first two months of the year. The metal still continues to accuse the powerful bullish pressure given by the physical market, at present in excess of supply: an extra extractive capacity which could assist the metal during the whole year.

As we can see from the graphic below, the price came back to the bearish channel started during the last September. Many analysts point the finger on the automotive sector whom request for Diesel engine catalysts (that use platinum a lot) it is in an unrelenting decline. 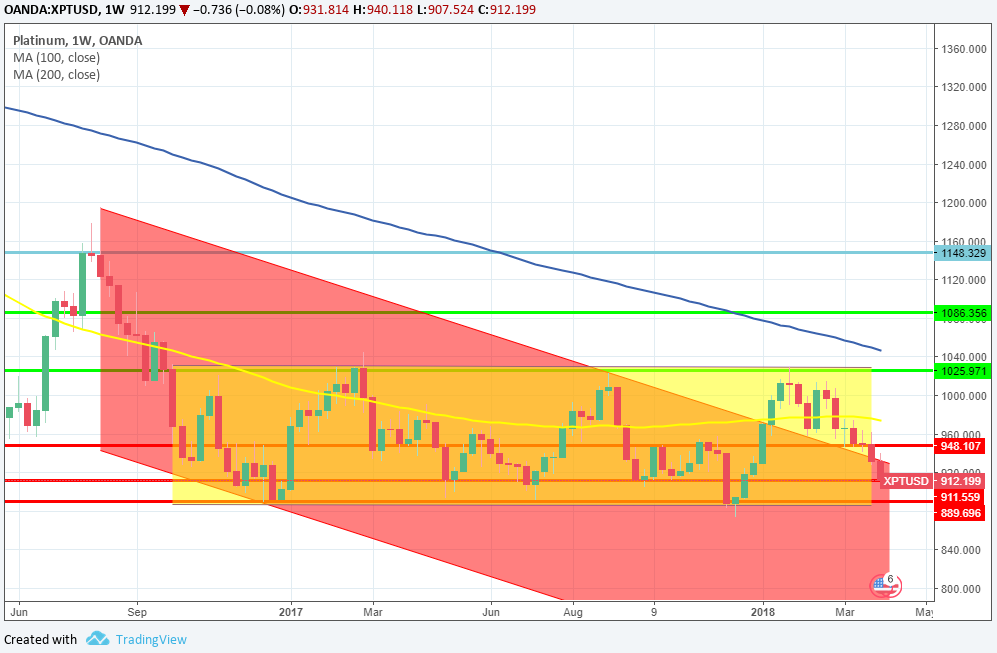 This week the palladium rushes the bearish movement that leads the quotations at the same level of the platinum ones. The bullish trend could therefore has arrived to a change: to be monitored the estate in area of 910 – 900$/oz and, after, the area around the 850$/oz. Even for the palladium, as for the platinum, the reason of such movements has to be given to the slowing down of the automotive market. As already hinted in the last report, the average price for all the 2018 will be – according to the analysts’ forecasts- around 950$/oz.

The scenario of the Eurodollar stays unchanged compared to the last week. The exchange rate is, at the moment, in an equilibrium phase (underlined by the yellow triangle): if from one side it is bought (the currency is preferred to the dollar by the investors in moments of risk-on) on the other side it is sold (considered the will of FED to make other 2 more increases during this year follow the recent increase and considered the latest macro European data published during the week). The trend still remains lateral-bullish. The main supports and resistances are in the bottom at 1,20 and on the top at 1,25. 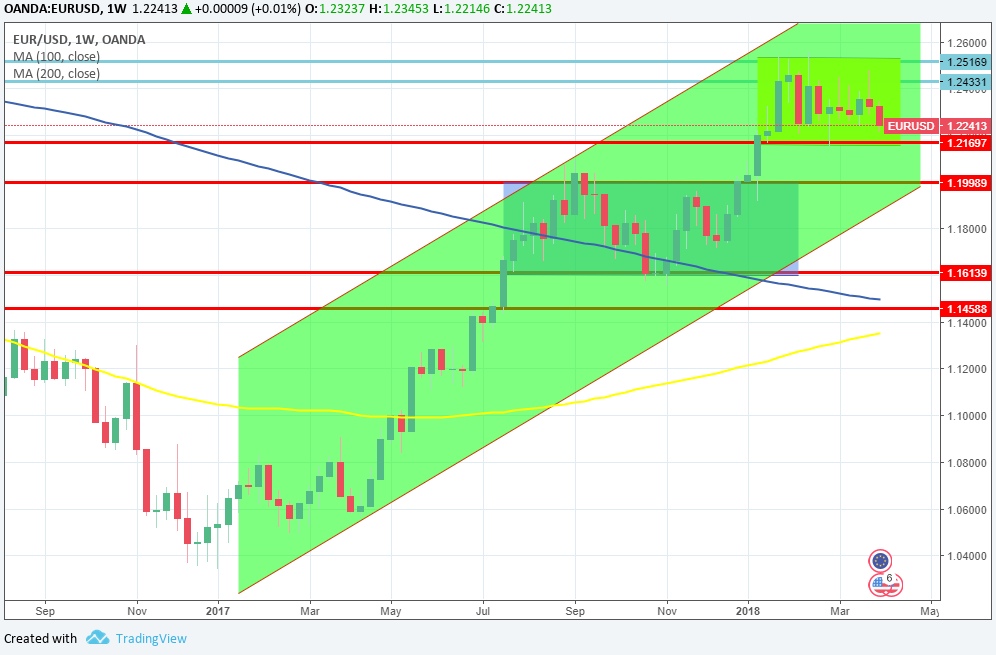