The week just ended has been relatively calm on the financial markets. The principals world stock indexes have reached new records. The black t-shirt of this rally it has been awarded to Spain, penalized by the Catalan independence referendum .Well, but not very well, Italy: the new rules that the BCE intends to put on concerning the not performing loan (or rather the deteriorated banking loans) had different effects on the banking compartment partially braking our stock exchange. In the political level, as mentioned before, it’s still the Catalan matter the argument more discussed : about this begun to start some voices about the departure of some financial institutes located in Barcellona, worried about the results of the referendum. Always to political level, on the dish him

Always at the political level, begins to weigh the impact that will have the next Italian elections.
On the American side, the attention is focused on the macroeconomic data. If these continues to be in line with the expectations of the analysts (but especially of the FED), the next rise of the rates of interest, scheduled within the end of this year, it certainty would have more probabilities to be applied . The interventions of Yellen and Draghi were during this week: in both cases, further comments around the monetary politics of the central banks have not been declared.

During the first week of the month the volatility has remained to a very low level (VIX in area 10) despite October historically is the most turbulent month regarding the markets. There is however to underline that the Chinese markets have been closed for festivity.

The gold, seen the propensity to the risk that characterized the markets, has returned on the levels of August (below the 1270 dollars per ounces) penalized from the strength of the dollar. The “green ticket” is preferred instead of the Euro one thanks to the fiscal reform introduced by the Trump government and from the expectations on the next rises of the rates of interest from the FED (1 in December and others 3 in the 2018).

Fourth consecutive week of rebates for the yellow metal. As mentioned above, both the fiscal reform of the President Trump and the interventions of the number one of the FED Janet Yellen have put the quotations under pressure. During the last week of the stock exchange the metal has mainly moved in a narrow range with a minimum at 1262 dollars (level most low of August) to a maximum of 1280 dollars. Currently the price travels under the average to 100 days. If the dollar will keep on growing stronger the quotations could go to touch the 1250 dollars per ounces in the brief term and the 1200-1210 in the middle one. Grow dim the chances to touch the historical resistance posts at 1375 dollars being the perception of the political and geopolitical risks being lowered besides. The outlook is neutral /bear on the brief term. In addition the negative data about the American employment published on Friday 6 October had a marginal impact on the markets cause influenced by the recent hurricanes that have shaken the Country. 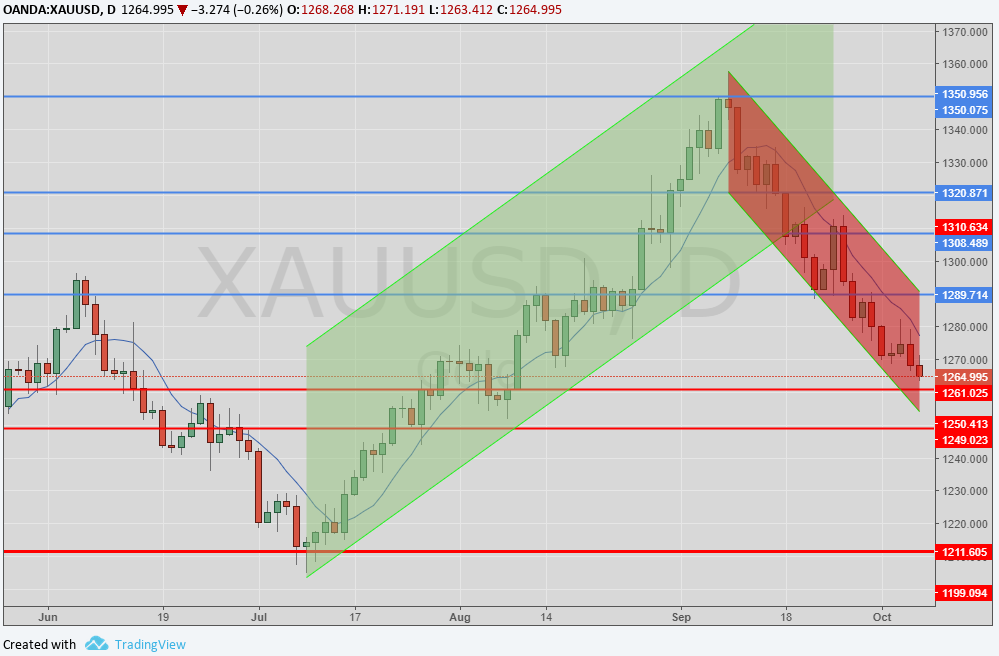 Also the silver as the gold, continuous to accuse the rise of the dollar. Currently the metal is supported to the strong support offered by the level place at 16,60 dollars per ounces . If the price would continue its drop, the first supports are placed in area 16,50. 16,35 and subsequently to 16,10 $ /oz.s Nevertheless, both for the gold as for the silver, it is not to exclude that the political repercussions of the referendum on the independence of the Catalogna and on the renewed government Merkel has not been completely pricing still from the market. Such elements of uncertainty could be the future drivers for a vigorous rebound of the quotations 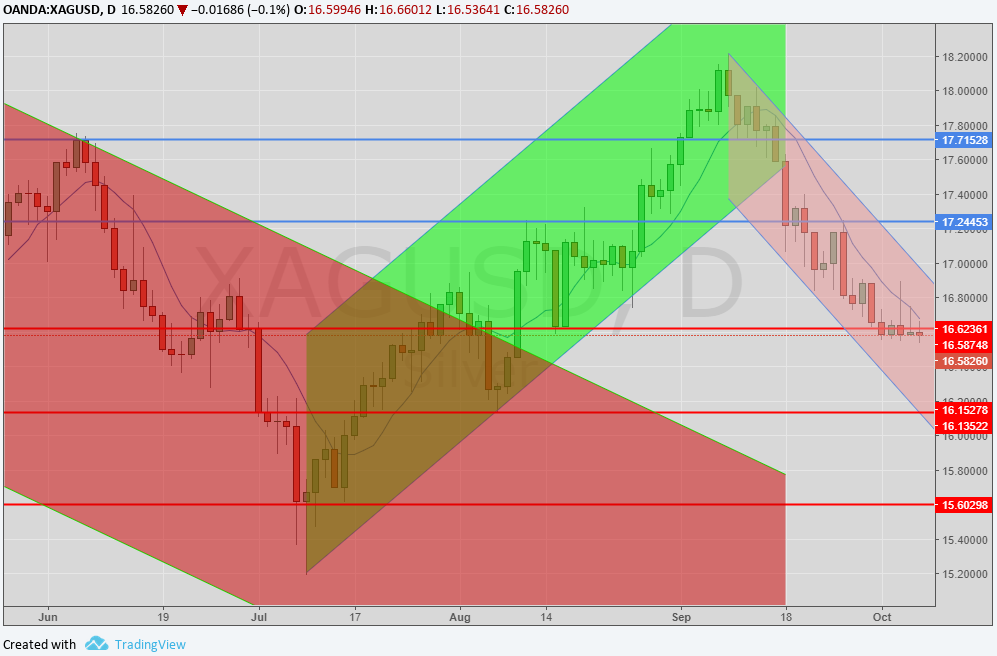 The price of the metal has oscillated the whole week in a narrow range of around 10 dollars, from the 910 to the 920. This phase could be looked as a phase of arrangement: if nevertheless the drop would continue, a good support is given in area 900 dollars. This price (discounted in comparison with the gold and palladium) could be seen as a good incentive and push the operators (speculators and commercial) to purchase the metal.

Unlike from the other precious metals , the palladium has greeted the week in a positive way going up the resistance posts at 940 dollars per ounces. The price, after having touched the low part of the trendline rising started at the end of July, has vigorously bounced. It is possible, another test of the maximum ones in area 1000 dollars per ounces. Nevertheless, the spread with the platinum would be able to rebalance in favour of this one bringing to the rebate the quotations in the middle term (with first target in area 880 and subsequently to 840). 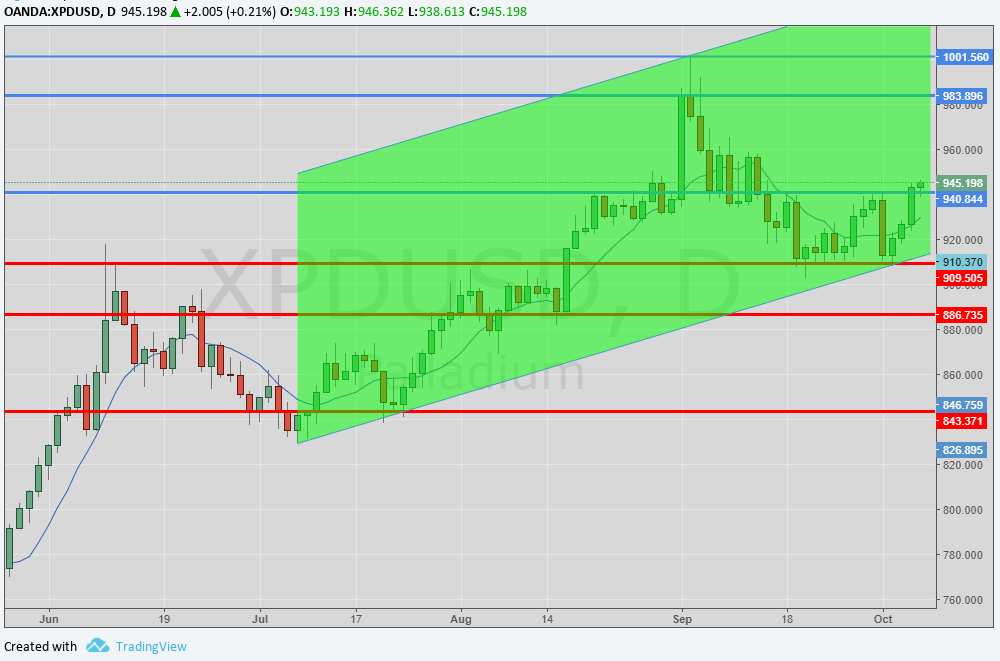 The change has broken the channel of the rising and has touched the area behind 1.16. The eurozona value has lost strength after the election of Angela Merkel and is becoming more weak after the words of Janet Yellen concerning the forward guidance of the FED. If the political uncertainty on the European ground would became more strength (you see Catalan situation) the unique value could continue the phase of the bear going to test the area at 1,14-115. To weight on the Euro one the differential one of the rates with USA and the next political elections in Italy. 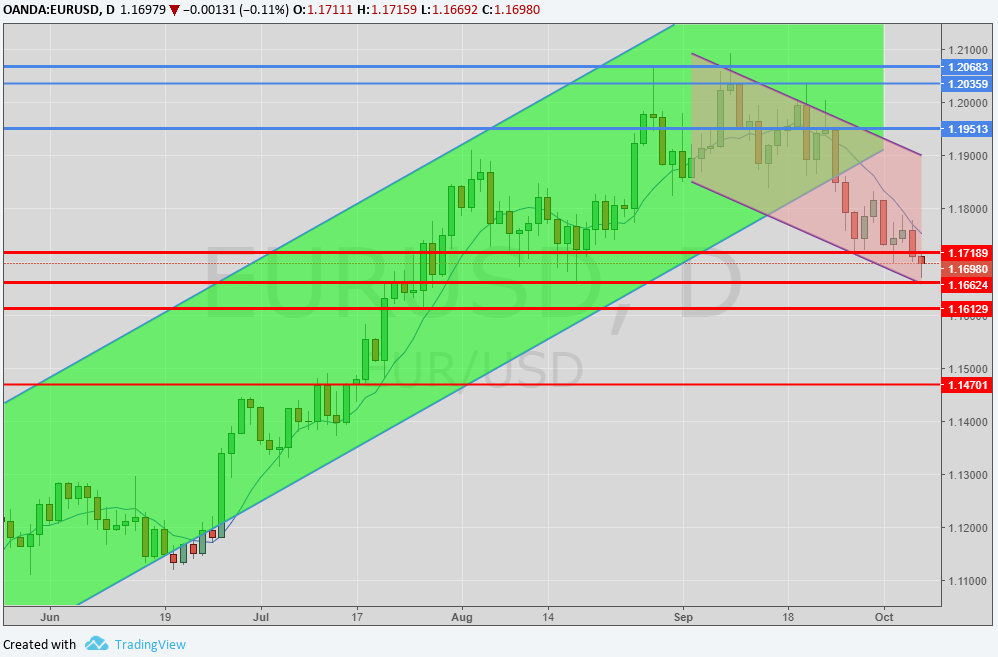