The week just ended saw, for the umpteenth time, the foreign policy of Donald Trump as absolute protagonist. In fact, the decision communicated in the late evening of Tuesday (at 8:00 pm Italian time) concerning the exit of the nuclear agreement with Iran - although not entirely unexpected - has bounced many souls. The agreement between Washington and Teheran, we remember, had been reached after several negotiations by the Obama’s government in July 2015 and welcomed by China, Russia and Europe. Now, with the exit of the United States, a fracture has been created within the rest of the nations in favor of maintaining the agreement, so much so that harsh criticism has not been expected either from Europe or Russia and obviously from Iran itself. For the latter - as they did know - the agreement will continue to remain valid. Instead, Trump is supported by Israel, whose army has bombed some Iranian positions in Syria shortly after the Trump’s announcement, thus reigning the tensions in the Middle East. The US Treasury has also specified that the sanctions will be reintroduced in 3 (or at the latest) 6 months and that will cover not only Iran but also every country that will continue to maintain economic relations with it.

Meanwhile, in Europe, the markets have been watching the evolution of the political debate in Italy for a whole week. The country is still waiting for a new government and the stalemate - which has lasted for several weeks - begins to worry investors in the euro area. The most feared hypothesis for the markets seems to be the spectrum of new elections, in the event that no agreement is reached between the parties. However, judging by the reactions of the markets, it seems that not even an agreement between M5S and the League is frowned upon: confirming this is enough to look at the evolution of the spread with Germany (at about 140 basis points) and sales on securities Italian equities. Finally, again during the week, the euro weakens against the dollar and touches the lows from the end of December: this is enough to push the European price lists upwards. Precious metals in light gains while volatility returns (VIX close to 12).

The tensions on the markets, especially following the cancellation of the nuclear agreement between Iran and the United States, have sustained the quotations of the entire precious commodity compartment (indirectly driven by oil, which reached 78 $ / b). The yellow metal, in particular, has rebounded from 1300 to 1325 $ / oz, and currently travels between the two daily moving averages at 100 and 200 days (see blue ellipse) after breaking the strong resistance in the area 1315 - 1317 $ / oz . The range in which the price fluctuates (1320 - 1360) has been a very "fought" area in recent months and it is unlikely that it will be overcome without a strong driver. 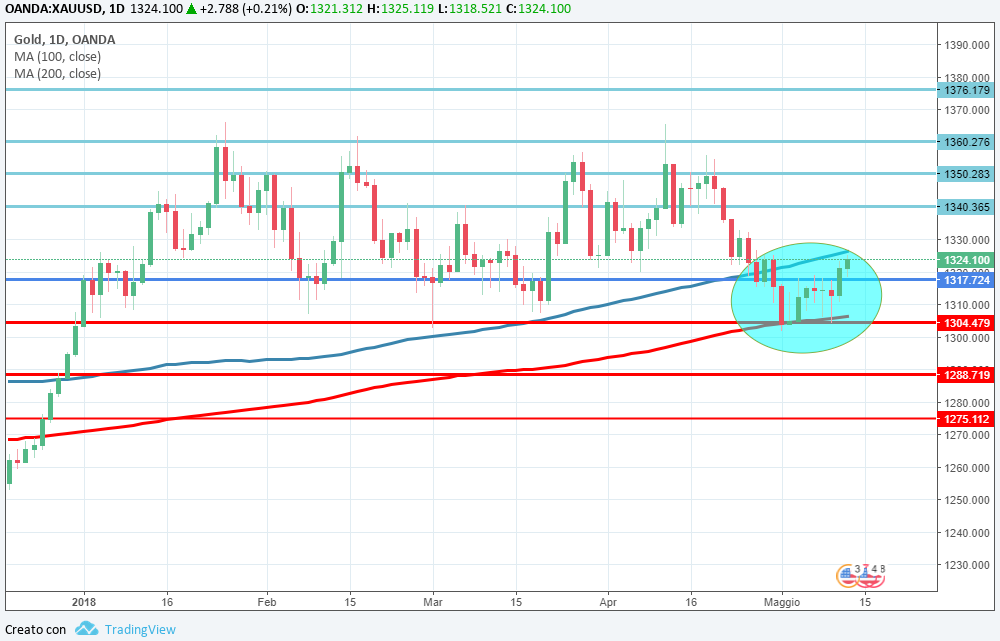 On the weekly chart, the outlook remains almost unchanged compared to last week, so neutral - positive, the price is still well above the two moving averages at 100 and 200 days. However, we will have to wait for the Fed's next move on rates (scheduled in June), to verify the direction and the goodness of the trend. To pay attention to the strong resistance in the area of $ 1350 / oz and, first of all, to the bottom of the bullish channel (in green) that, if broken down, it could trigger sales and profit taking. 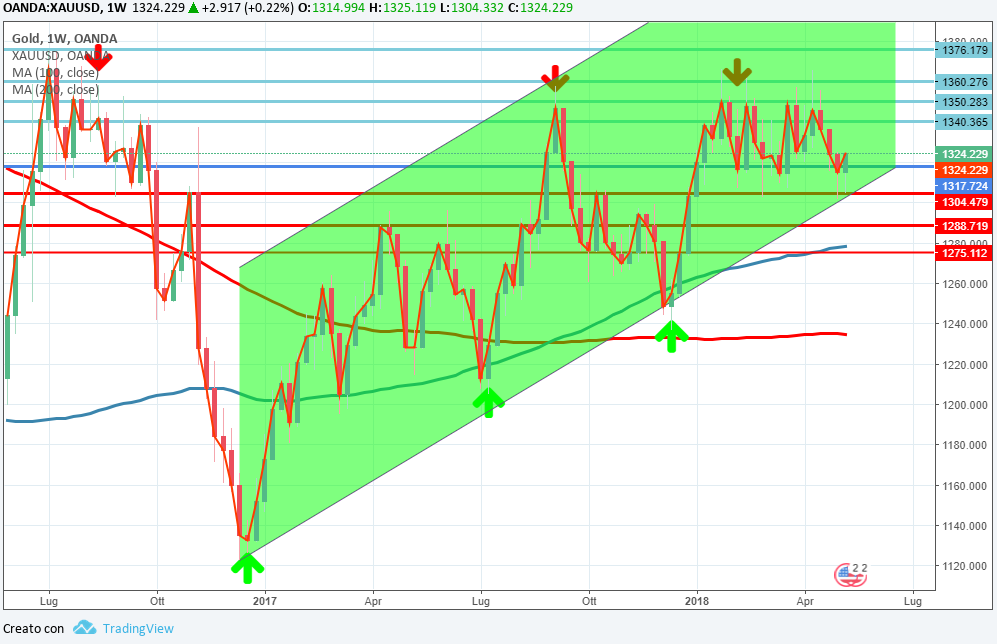 During the week also the silver recovers a bit of force and manages to bring itself back above the $ 16.50 / oz. The metal continues to follow the trend of gold although with greater weakness. The prices are still moving below the 100 and 200 daily moving averages. The outlook remains negative as long as the $ 17 / oz barrier remains intact. Investor interest is also scarce: open positions on the metal (open interest) have been at the minimum for several months now. 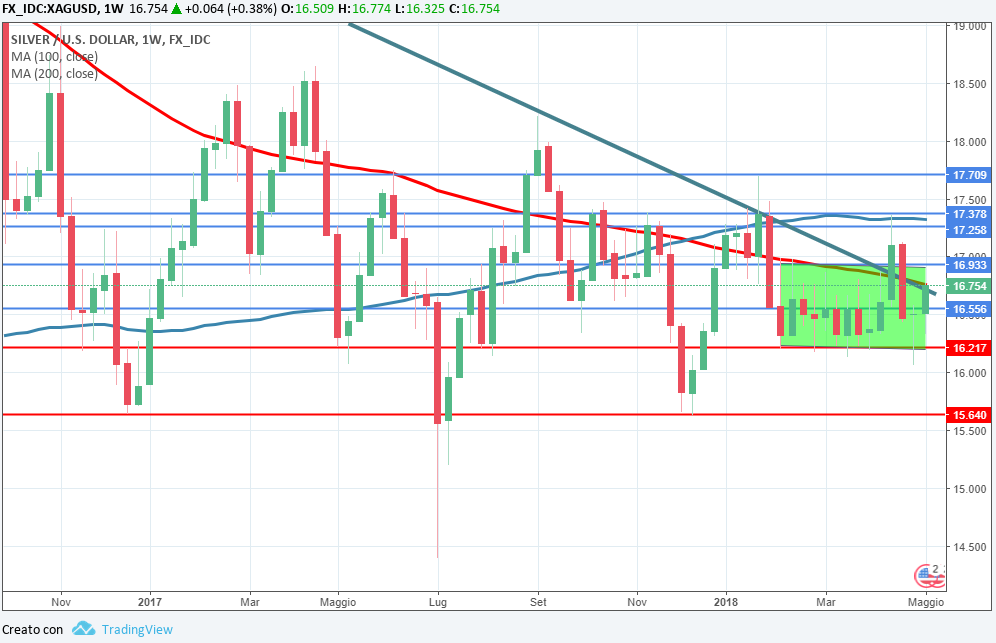 After reaching its annual minimal, platinum earns $ 15 a week this week and manages to move above $ 920 / oz. The price still continues to travel well below the 100 and 200 daily moving averages and therefore the outlook is reconfirmed to be negative. For a reversal of the trend we will have to wait for a decisive break of 950 - 960 $ / oz. However, according to a survey conducted by Reuters, the average price for this year should be around 968 $ / oz, so not far from the current levels. 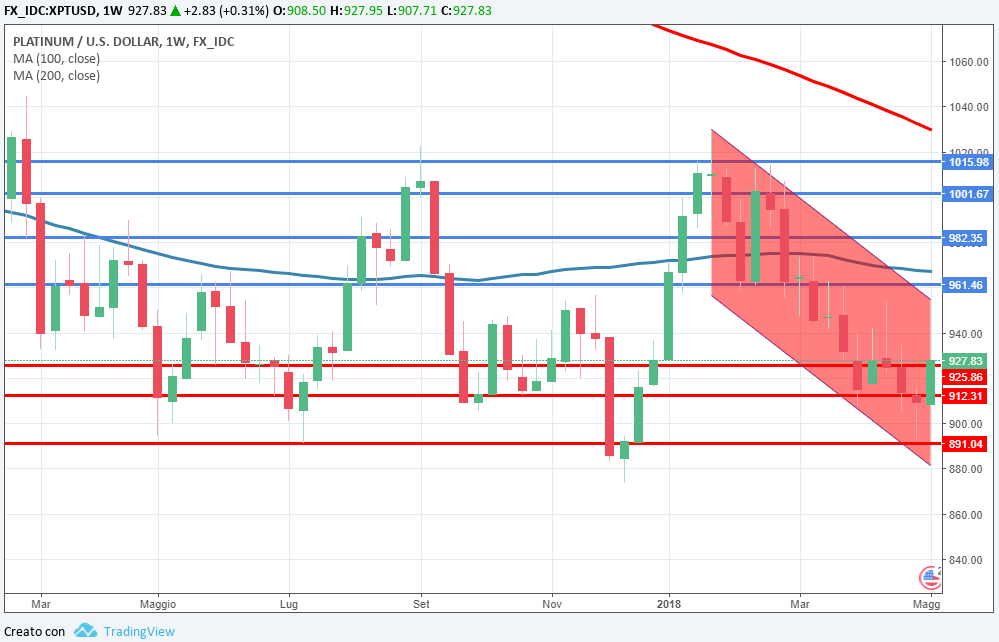 The sanctions against Russia, also this week, support the quotations. The outlook is positive, and as shown in the chart below, the price has returned to the long-term uptrend channel (in blue). However, according to a recent survey by Reuters, the average price for this year should settle not far from current levels (target $ 1039 / oz). Finally, the moving averages at 100 and 200 (weekly) still remain far from the current prices. 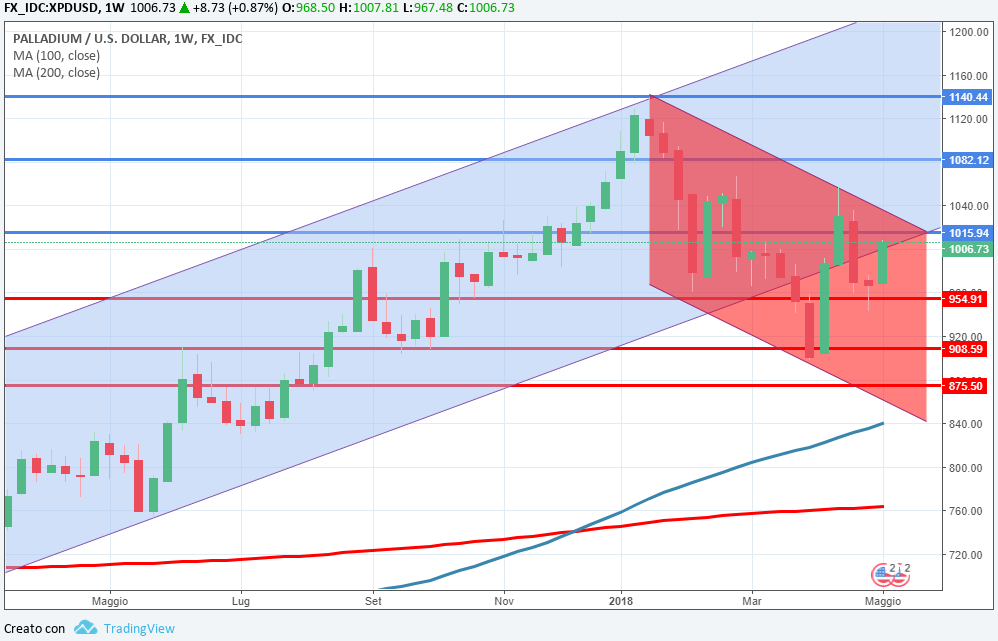 The exchange rate during the week hit the lows with the dollar from December 2017, but then it rebounded and settled just above 1.19, following the disappointing data on the US inflation. The Eurozone currency also pushes up the unanimous decision of the European countries not to abandon the nuclear agreement with Iran. The exchange rate is currently in a strong support area (1.15 - 1.19) and at the lower end of the bullish channel. However, it remains above the weekly mobile averages at 100 and 200. The outlook had definitely deteriorated compared to last month, nonetheless the trend remains bullish. 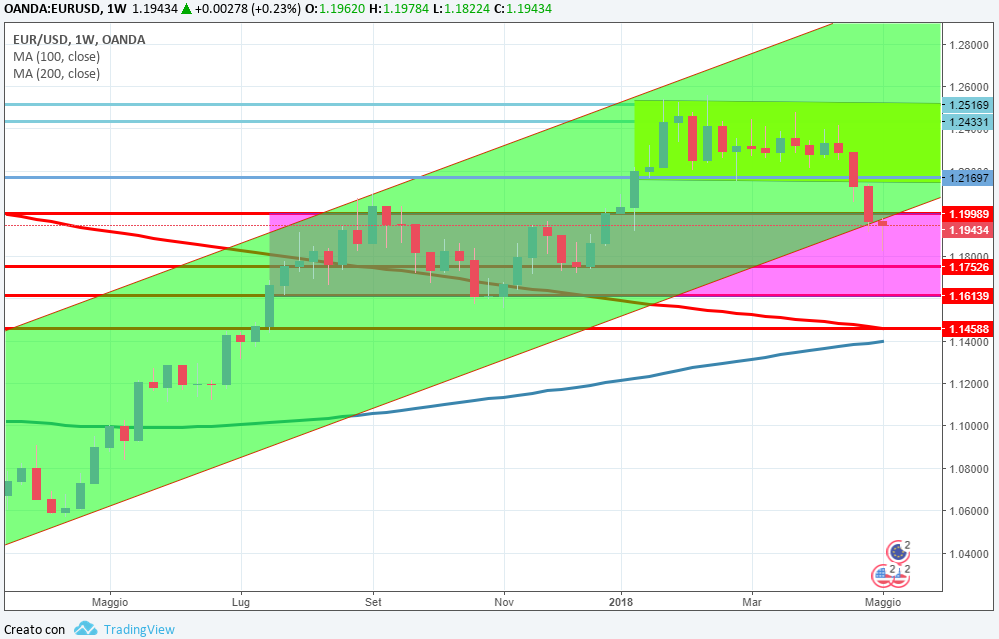