The stock exchange week was once again characterized by the tensions arising from the tariffs both between the USA and Europe and between the US and China. The talks between Trump and Merkel (which took place last Friday) did not lead to any unanimous solution but rather intensified their tones, especially in the event that Washington decided to continue on its way.

And neither did the two-day negotiations with Beijing seem to have started on the right foot, as the first comment, at the end of the Friday 4th of May session, was rather daunting: "The differences remain great," says IlSole24Ore, mentioning the New China Agency ( Xinhua) - The two sides, however, have committed themselves to resolving their trade disputes through dialogue ". Recall that the United States has asked China to reduce the trade surplus of 100 billion a year (up to double to 200 billion by 2020). A condition that, at the moment, does not seem acceptable to the Chinese counterpart. And so the eighth of the stock market began under the banner of low volumes (also due to the holidays of May 1st) and lack of confidence. Even the mid-week meeting of the FED did not help the operators, from which it has not been possible to find too many indications, except that the inflation is stabilizing towards the long-awaited target of the 2%. At the moment, the desire to accelerate the rate of rate hikes has not emerged and it can therefore be concluded that, in all likelihood, this year there will be 2 more increases at the most. In fact, the latest US macroeconomic data suggest a slight slowdown in growth and the same goes for the Eurozone, especially after the data published in the week on inflation (declined in April).

In the face of so many uncertainties, the attitude of the operators was rather cautious and there was a shift in investments in less risky assets (such as government bonds and safe haven currencies). The precious goods compartment (and the discourse can be extended to raw materials in general) was penalized by the strong dollar on the one hand, but on the other hand supported (this applies only to valuables, especially gold and silver) from the climate of uncertainty at commercial. The Euro-dollar exchange has in fact fallen, after several weeks, below the key level of 1.20. 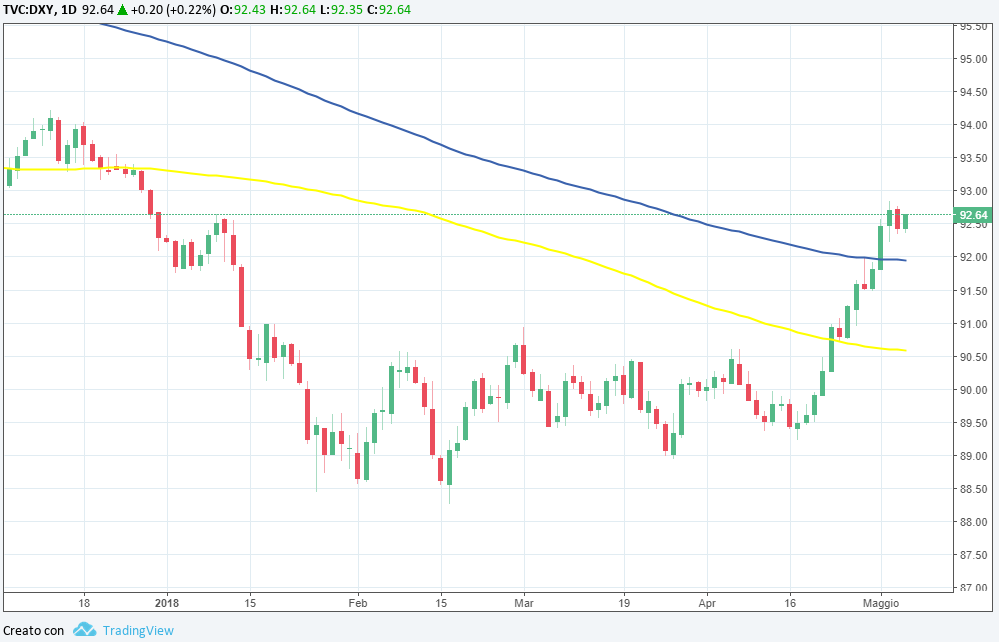 Gold and American dollar: once more in an inverse correlation: (gold in red) 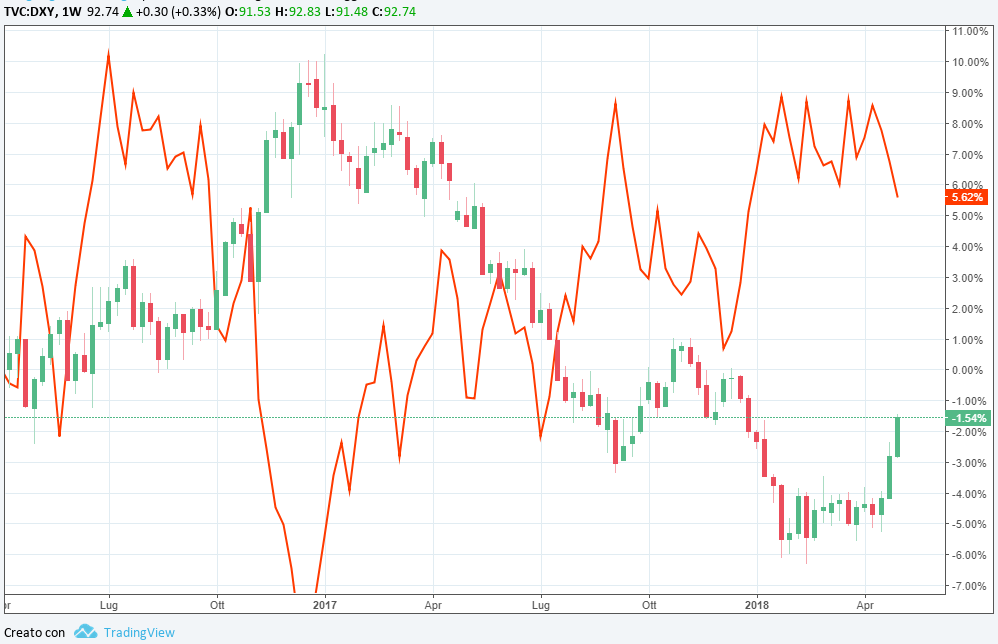 As mentioned above, also this week the dollar is driving the price trend of the yellow metal. The rediscovered strength (note the dollar index above the 100 and 200 day moving averages) puts the raw materials under pressure. The yellow metal, however, is supported by the progress of the negotiations on duties between America and China, the success of which is currently at least uncertain. Currently the price has rebounded from the 100-day moving average in the area of 1304 $ / oz which provided good support. To monitor the trend of the green ticket which, we reiterate, seems to be one of the most important drivers. 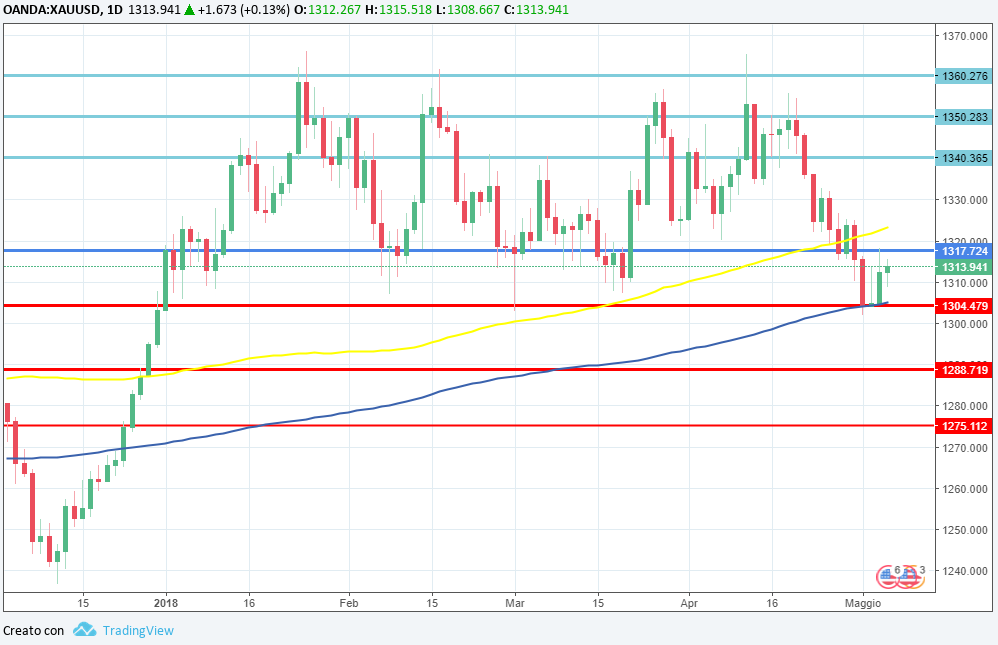 On the weekly chart, the outlook remains neutral - positive, as the price is still above the two 100 and 200 day moving averages. Despite the fall of the last three weeks, several analysts remain bullish on the metal although they admit that, at least in the short term, the descent could continue. The target (most common among forecaster) at the end of 2018 remains unchanged at 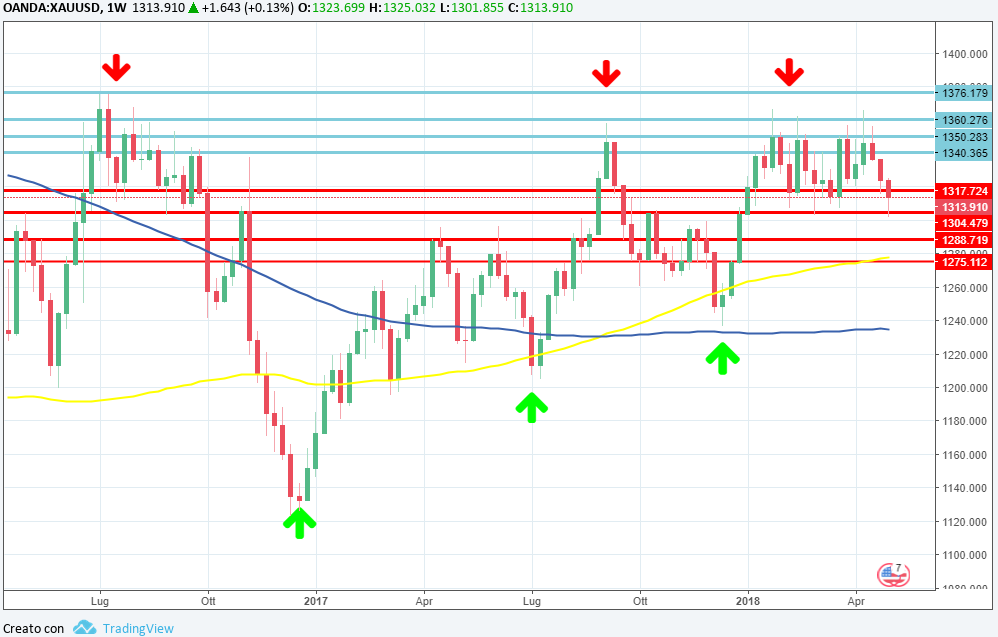 Week not moving for the silver, whose prices however come back below $ 16.50 / oz. The metal has followed almost slavishly the trend of the noblest brother but the scenario, in this case, is less rosy. Quotations have resumed moving below 100 and 200 days moving averages. The outlook therefore changes from neutral to negative. 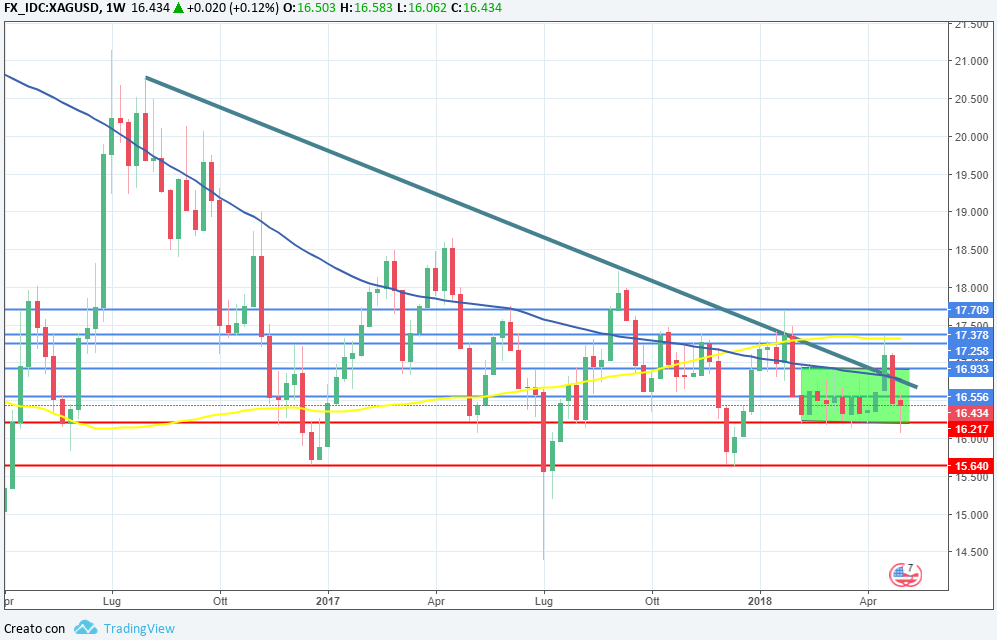 Even for platinum continues to hold - as for last week - the same speech made for gold and silver about the rediscovered strength of the dollar. However, if the fundamentals are relatively positive for gold and silver, the same cannot be said about platinum. As already mentioned above, the weakness of the metal is dictated by the low demand, both industrial and that coming from investments. The price travels well below the 100 and 200 day moving averages and has reached its annual lows below $ 900 / oz ($ 891 / oz). Therefore, the outlook is reconfirmed to be negative. 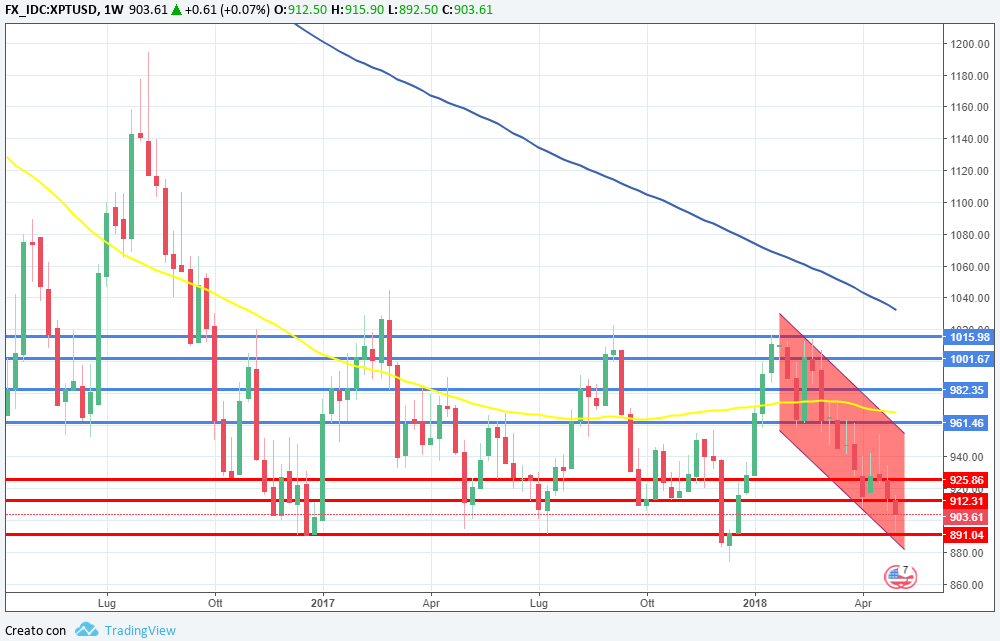 The sanctions on Russia also continue to hold up and the fundamentals still support the price of metal (which, like the rest of the compartment, is still penalized by the renewed strength of the dollar). The outlook is positive, even though the scenario has slightly deteriorated (the prices seem to have lost the long-term bullish channel). Nonetheless, the 100 and 200 day moving averages still remain for this week well below current prices. 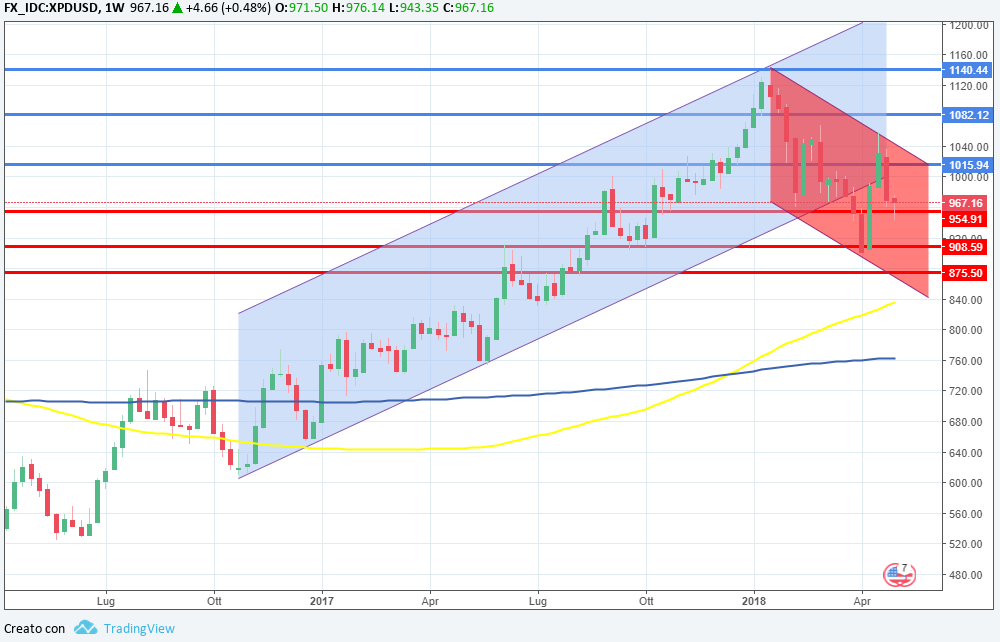 The euro's decline continued during this week, the cause of which is attributable - also in this case - to the strength of the greenback. The exchange rate fell for the first time after several months under strong support in the 1.20 area. The picture therefore becomes neutral - neutral / bearish. The most important supports and resistances are found below 1,175 and high at 1,20 - 1,25. 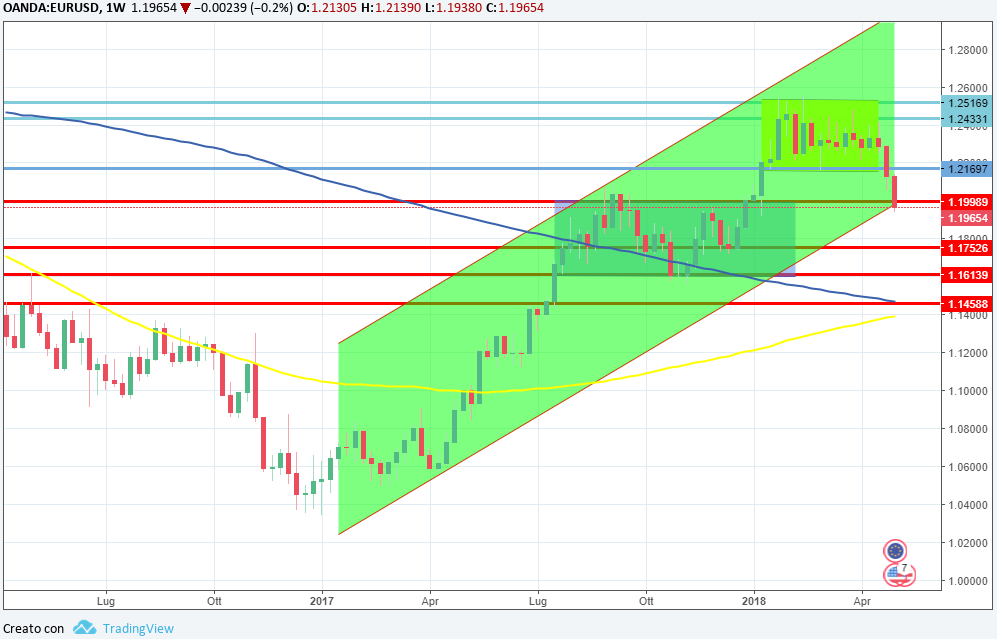