This week was an historic summit, held on Friday, in Panmunjom village between the leader of North Korea Kim Jong-un and the president of South Korea Moon Jae-in. The two state leaders have signed a joint declaration in which they commit not only to complete the denuclearization of the peninsula, but also to make the armistice a real peace treaty within the next year. This event, really followed by Washington, anticipates the next summit, which is in the agenda for the middle of May, between Kim Jong-un and the President of the USA Donald Trump.

Still during this week the press conference of the Bce was held after the usual monthly meeting of the board. The tones used by Mario Draghi have been seen by the markets as very easygoing, so much that the exchange rate of the Eurodollar has passed, in a short period of time, from 1,22 to 1,20. In particular, the number one of the Bank has assert that: “ based on the usual economic and monetary analysis we have decided to keep the reference interest rates of the Bce unchanged. We are still expecting that they continue to stay on levels equal to the present ones for an extended period of time and far beyond the horizon of our net activity purchases”. Draghi has even added that “still there is the necessity of a wide degree of monetary stimulation, so that the underlying inflationary pressures continue to be accumulated and sustain the total dynamic of inflation during the short period”.

But, if the European markets have been calmed down, once more, by the monetary politics of the Bce, the American ones have been shaken because of the fact that the yields on 10-year government bonds have exceed the threshold of the 3%. What could cause a raise?. Simply, the investors could decide to make the expositions to stocks lighter (considered more risky) and to re-invest in government bounds (less risky) with a consequent “decrease” of the stocks lists. Furthermore, with the increasing of the state bonds, generally, there is an appreciation of the dollar (which is what happened during this week), going to penalize the primary sources listed on the American stocks. So, the precious metals have accused such appreciation of the dollar and they closed the week leaving on their back the earnings made during the eight past weeks of stocks market, when the dollar still seemed to weaken without stopping.

The Dollar Index goes back to raise… 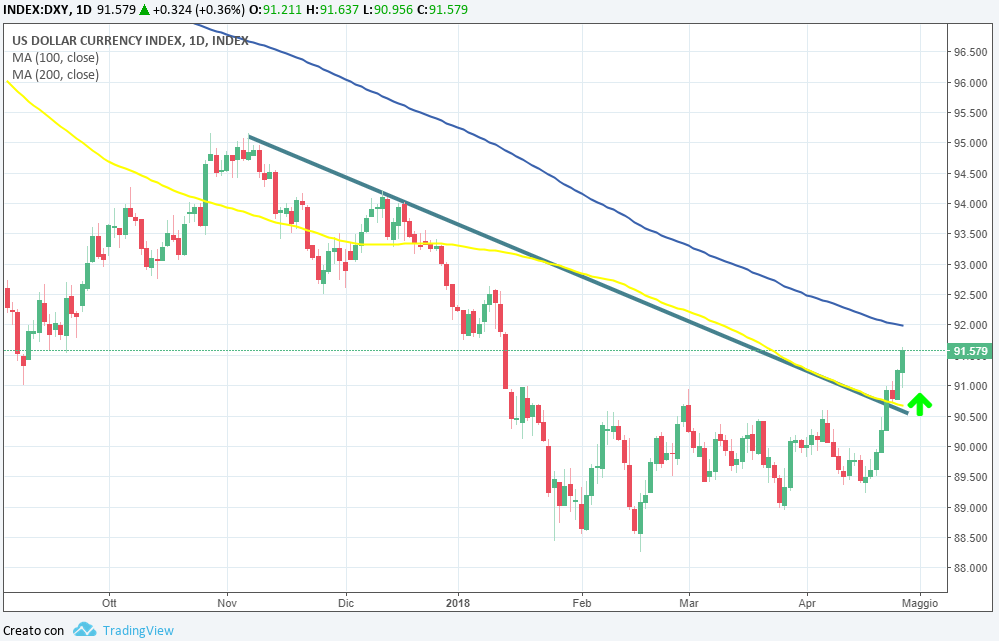 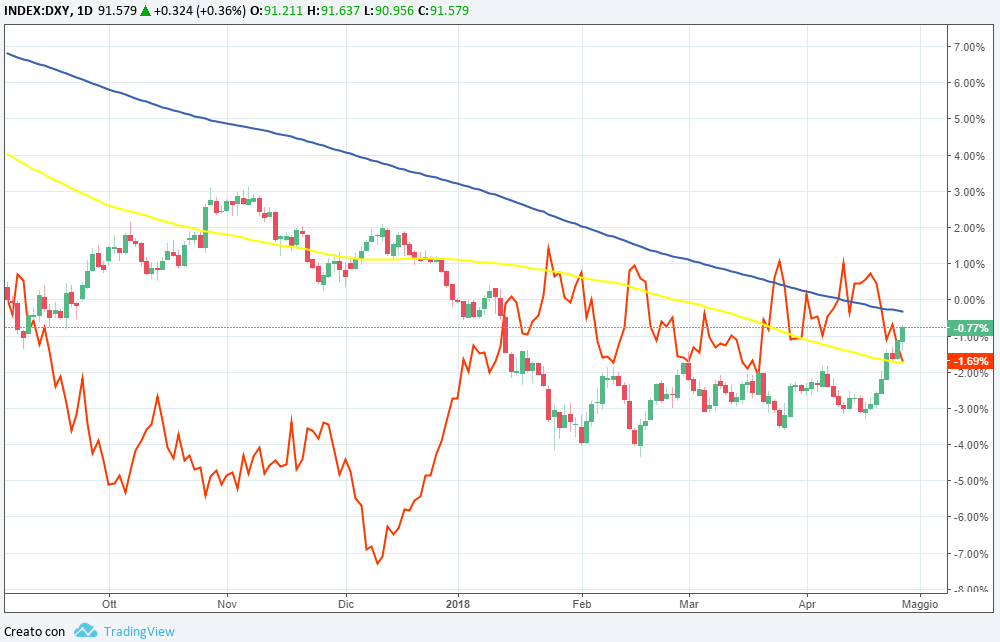 The relative calm on the geopolitical level and the reinforcement of the dollar have penalized the yellow metal, which after breaking the bullish trend line, is still carrying on this week the downward descent. The yielding of the support in the area of $1330 / Oz have given further fuel to the buyers. At present, the price is sustained by the mobile average at 100 days in the area of $1315 /Oz. To be monitored the trend of the dollar that, at the moment, seems to be one of the most important drivers. 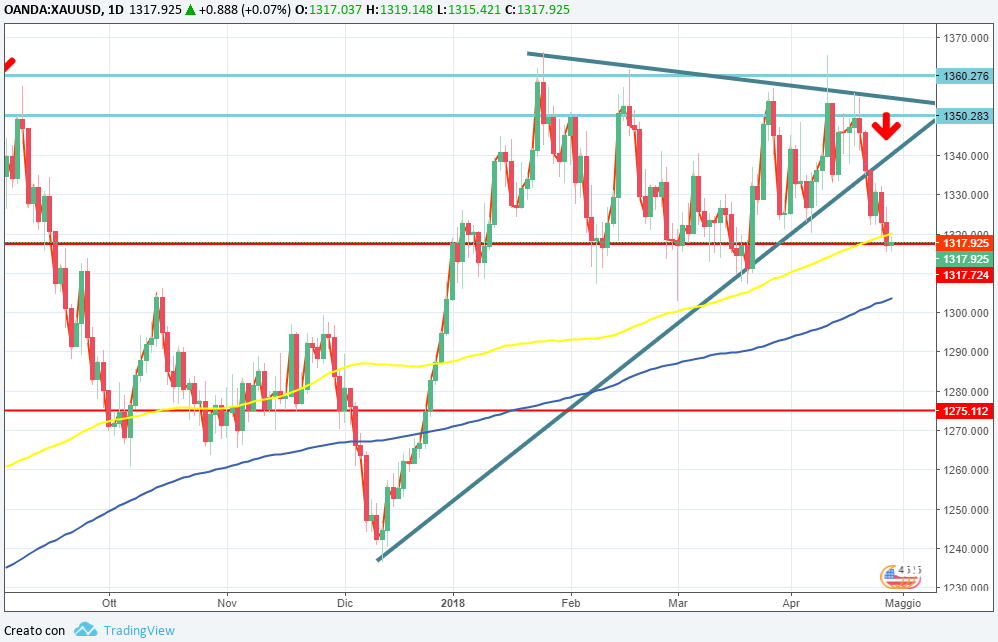 On the weekly chart the outlook remains neutral – positive, because the price is still above the mobile averages at 100 and 200 days. Despite the fall of the last two weeks, many analysts stay bullish about the metal, even though they admit that, at least in the short time term, the falls might continue. 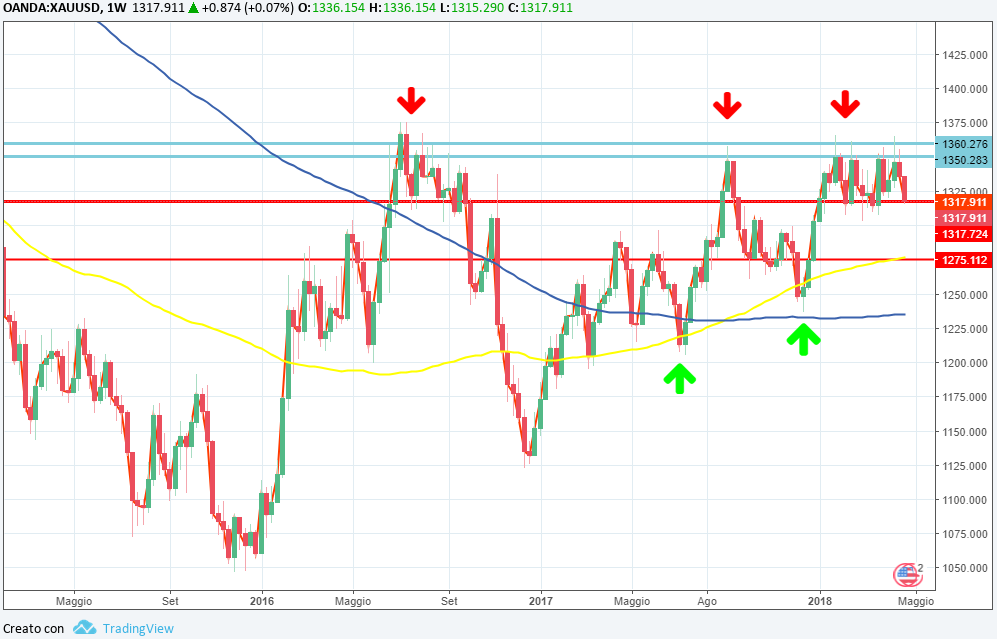 Despite the fundamentals for the metal went back to be positive, the week closes in red. The stock quotes , that during the last days they have broken to the increase both the bearish trend line (see the chart) and the mobile average at 100 days, they have slip back underneath both of them. Therefore, the outlook goes from being positive – neutral to be neutral. 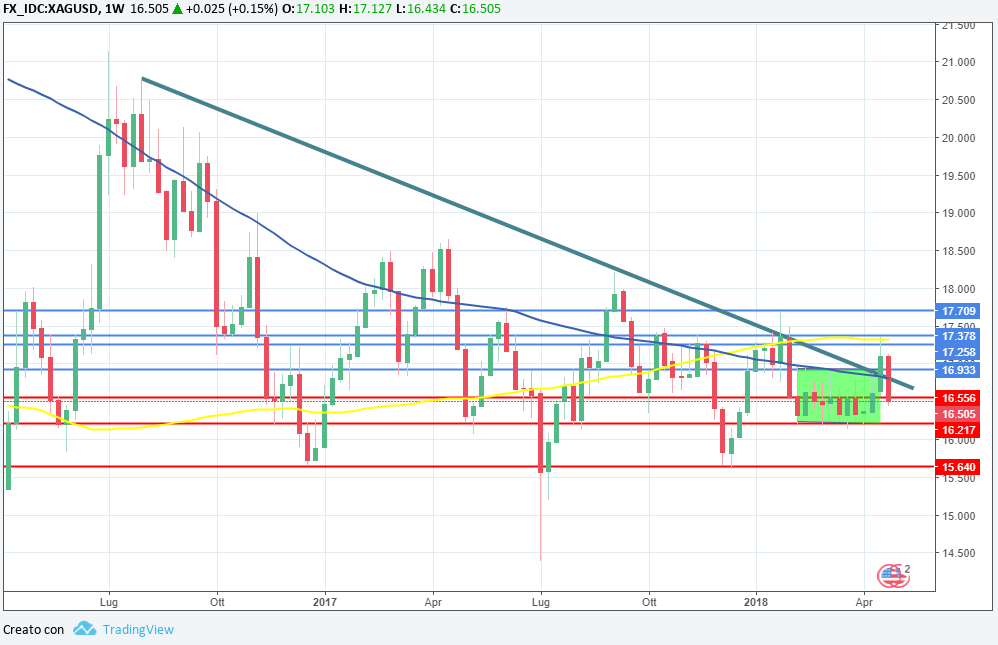 Even towards the platinum the talk made for the gold and silver, about the recovered power of the dollar, is valid. However, if for gold and silver the fundamentals are relatively positive, we can’t say the same regarding the platinum. As we already previously said, the weakness of the metal is given by the poor demand, both the industrial one and the one coming out from investments. The price is floating well below the mobile averages at 100 and 200 days and it is at the annual minimums. The outlook is confirmed to be negative. 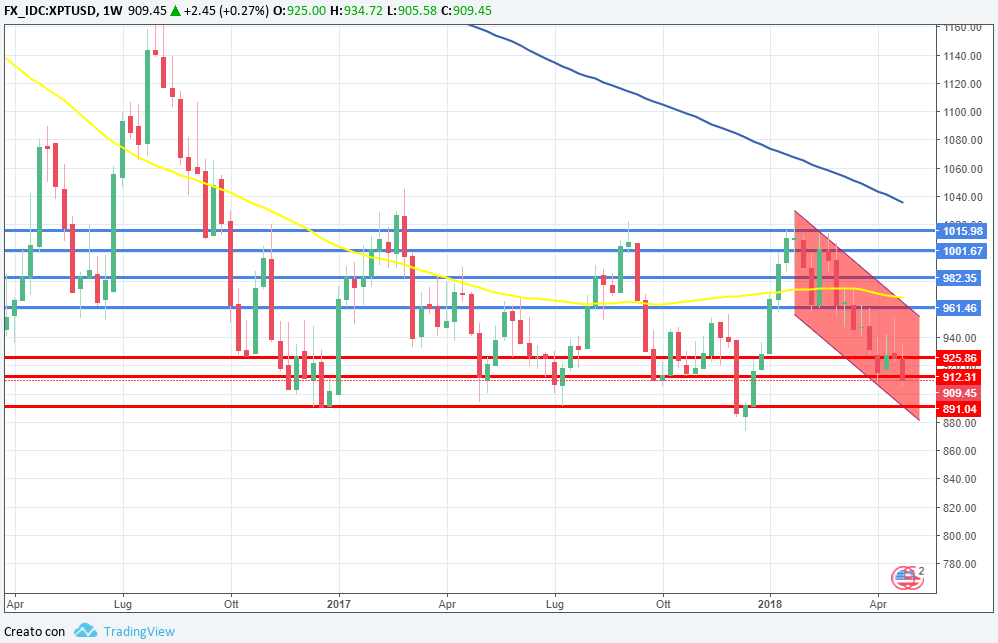 The sanctions towards Russia (that gives approximately the 40% of the global palladium demand) and the fundamentals still continue to sustain the price of the metal, which is penalized by the increase of the dollar yet. The outlook still continues to be positive, because the mobile averages at 100 and 200 days are still much more below the present quotations. To be monitored the bullish channel in which the price is trying to be reinserted. 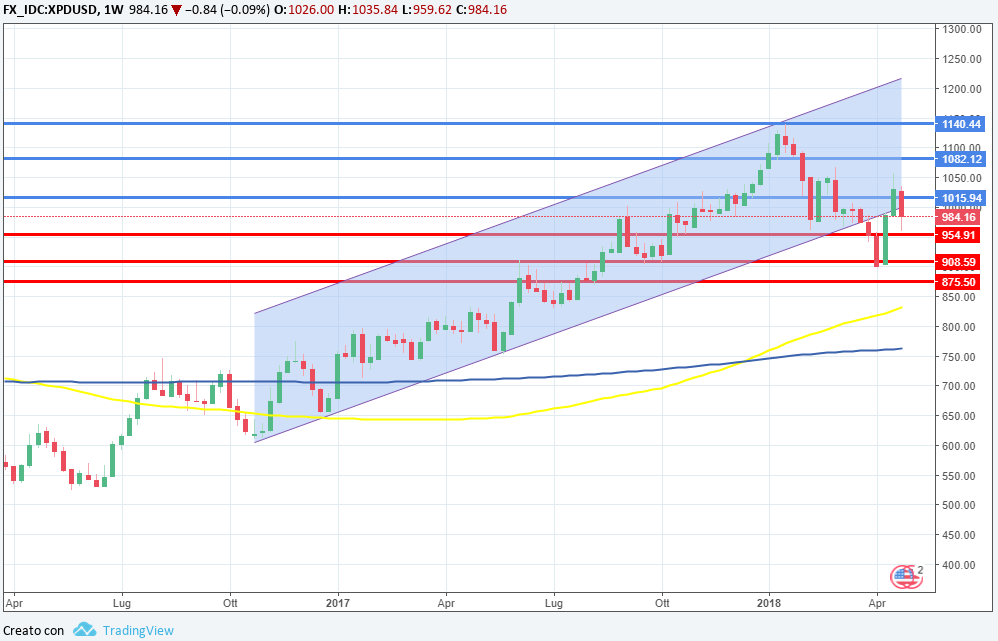 After several weeks of deadlock, This week the exchange rate is moved by Mario Draghi’s words, that confirm one more time the easygoing politic of the Bce. The exchange rate clips the inferior part of the rectangle, in which it was swinging since the beginning of the year, and it goes to test the strong support put at 1,20. The trend goes from lateral- bullish to neutral. Th emain supports and resistances are down at 1,20 and up at 1,25. 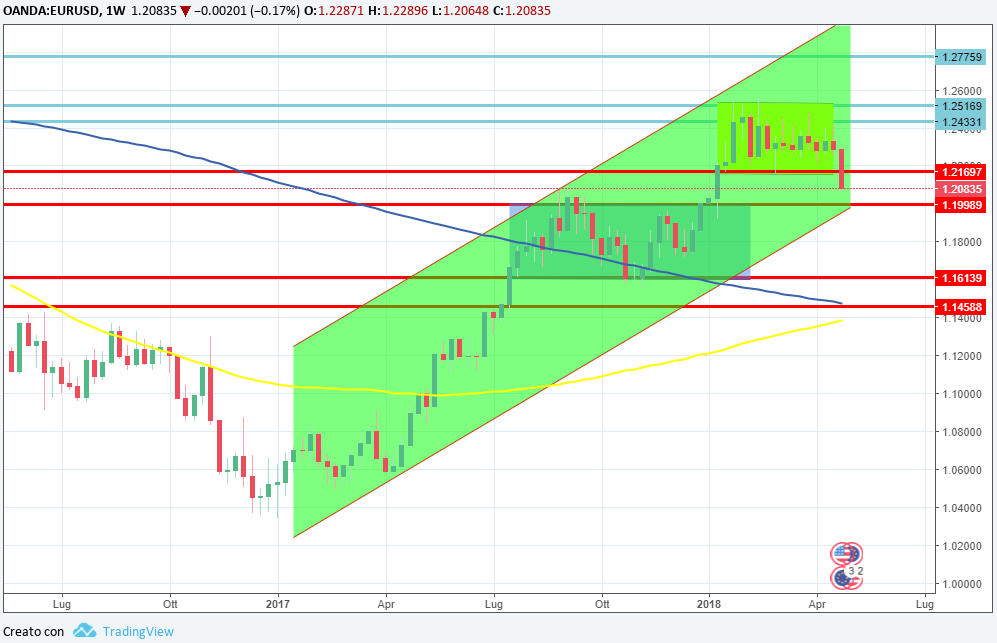