The week just ended saw, once again, the predominance of political and geopolitical issues on the markets. Regarding the first one, it is Italy – specially observed by investors and Brussels - that continues to cause concerns both because of delays in the formation of the new yellow-green Executive, and because of the footprint (if not otherwise perceived by the observers) anti-European that could take the rising M5S-League government. In particular, to trigger a real earthquake on Piazza Affari, it was the publication of a draft of the program (subsequently amended and republished as "obsolete") whose content initially triggered sales and profit taking on the Italian stock market. This uncertainty has also put pressure on the euro (currently at around 1.788 on the US dollar) but, at the same time, has benefited the other European stock exchanges whose performances have generally been very positive. On the international level, on the other hand, the matter has been on trade tariffs between the United States and China to keep the spotlight on. The two superpowers would have reached - on Friday - an agreement that would result in a significant increase in the annual purchases of American goods by Beijing (up to 200 billion dollars). This agreement - announced by the Trump’s administration - although it managed to partially relax the investors, on the other hand was not able to curb the rise in the yield curve of 10-year treasuries, at record levels of 7 years to this part (3.11%). In fact, thanks to the good US macroeconomic data and a price of oil closer to 80 dollars per barrel, the chances of a rise in interest rates are becoming increasingly substantial (substantially in line with inflation expectations). The aforementioned reasons were also the main drivers responsible for the fall in the price of gold, at its annual lows at 1285 $ / oz. Furthermore, the metal continues to be penalized by the renewed strength of the dollar and only partly sustained by political risks. Negative week also for the other metals of the precious compartment (silver and platinum) with the exception of palladium. The Japanese yen is also bad: the disappointing data on inflation (slowing down for two consecutive months) have pushed sales.

The geopolitical tensions only partially supported the fall in the price of the metal that in the week goes to lean on the support at an altitude of 1285 $ / oz. As written a little above, the strong dollar and the ten-year US yields in continuous upward pressure put the gold whose cost/opportunity becomes gradually less appetizing in the eyes of the investors. As can be seen from the chart below, the quotations travel below the moving averages at 100 and 200 days, now at the annual lows. However, the area to which the price is directed (1275 - 1285 $ /oz) would seem to offer a good support. 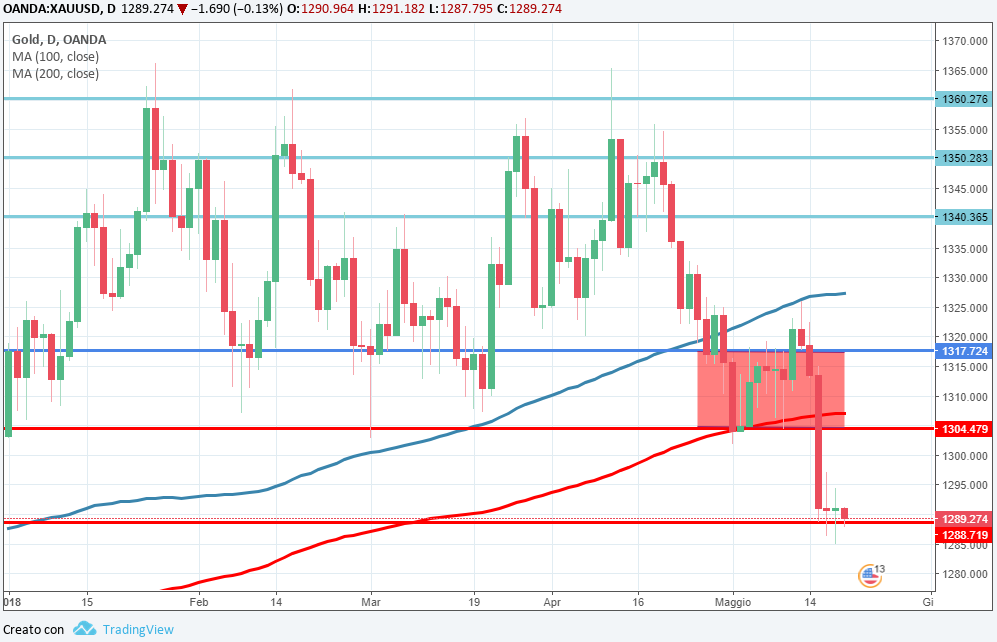 On the weekly chart, the outlook has visibly deteriorated after the loss of support in the area of $ 1300 / oz. Important sales are pushing the price down to the bottom of the uptrend channel at $ 1275 / oz (green). Also lost both the moving averages at 100 and 200 (weeks): a strong bearish signal that could further exacerbate the current trend. The next step on the rate hike is scheduled by the FED for next month: as what happened during the previous meetings, this rate hike coincided with the minimum hit by the price of the metal. 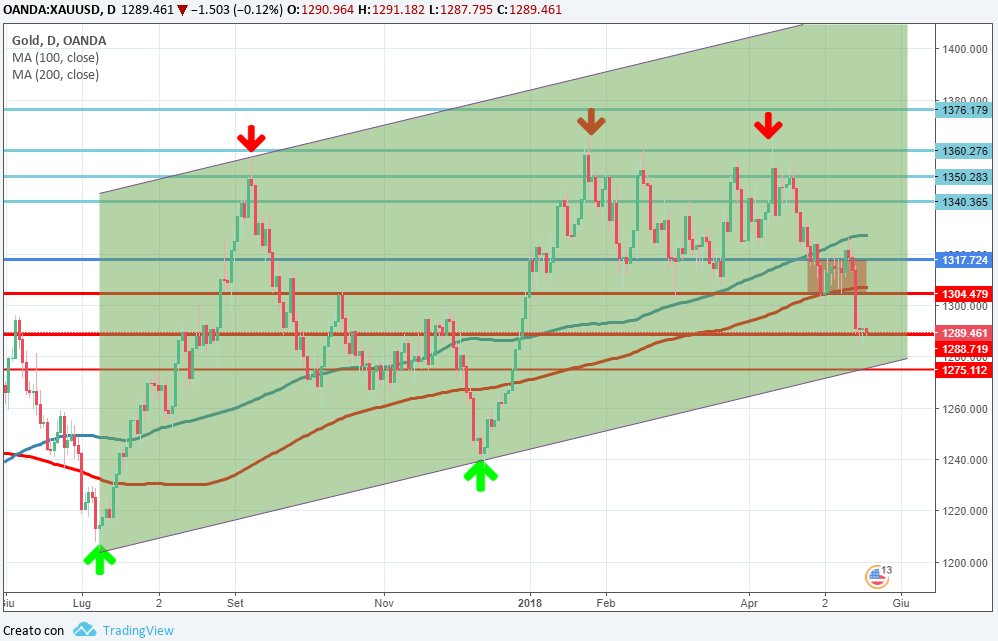 Negative week also for the silver. The metal, in the wake of the gold trend, is once again put under pressure by the moving average at 200 (weekly), which seems to be an inviolable resistance for the metal. Quotations (which currently fluctuate around $ 16.39 / oz) also move below the 100-week moving average. The outlook remains negative as long as the box 16.20 - 17 $ / oz (in green) remains intact. To be monitor the lower part (to 16.20 $ / oz): the yielding would trigger the run towards new lows in the direction of 15.60 $ / oz. 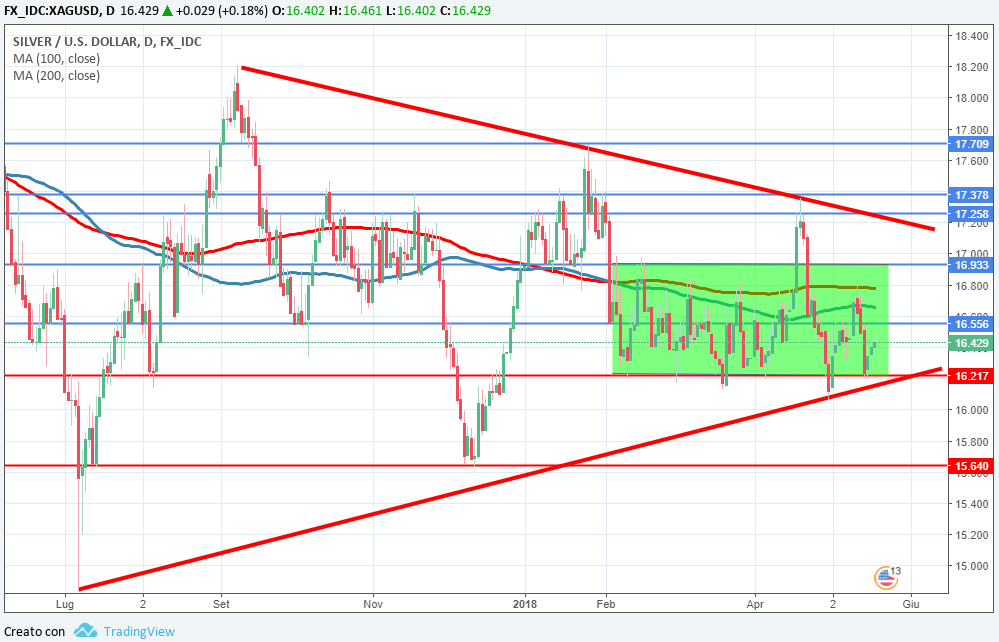 Also this week, for platinum, the downward race has continued. The metal prices are now close to the annual lows and close to those of December 2017. The price still continues to travel well below the moving averages at 100 and 200 (weekly) and the outlook is therefore reconfirmed negative. As already written in the last report, for an inversion of the trend we will have to wait for a decisive break of 950 - 960 $ / oz. The global slowdown in the car market is weighing on prices (especially in the retail sector). 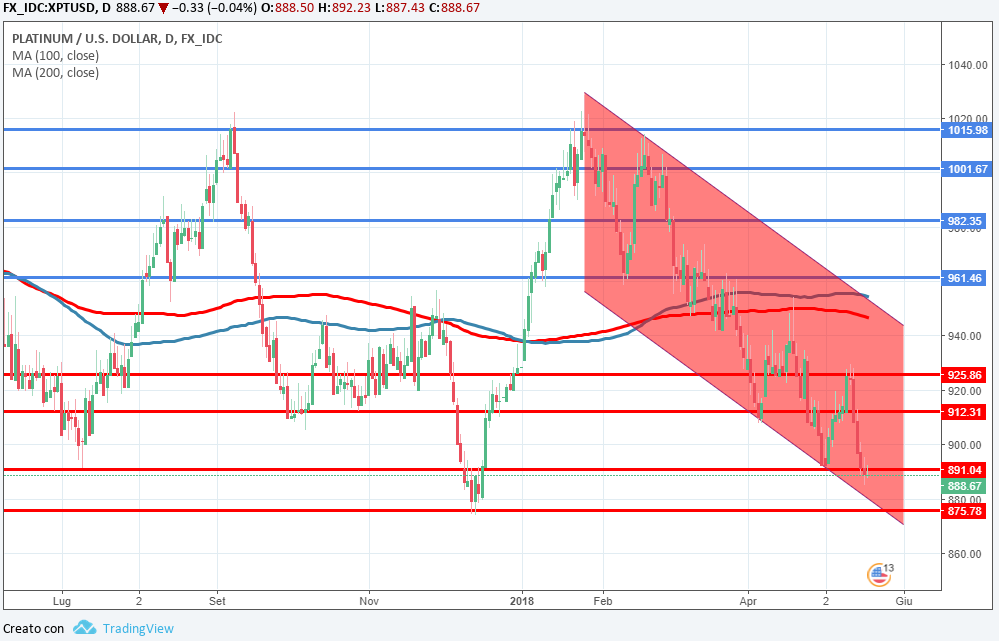 Despite a positive weekly closing, the price of palladium struggles to fall back into the bullish channel (in blue), from whose lower edge continues to be rejected. Currently the price fluctuates within the range 950 - 1000 $ / oz and remains above the moving averages at 100 and 200 (weekly). As for platinum, the main driver of prices is the cooling of the car market. To support purchases, however, there are sanctions on Russia. The outlook is moderately positive. Strong supports to be monitored at $ 950 / oz and subsequently at $ 900 / oz. 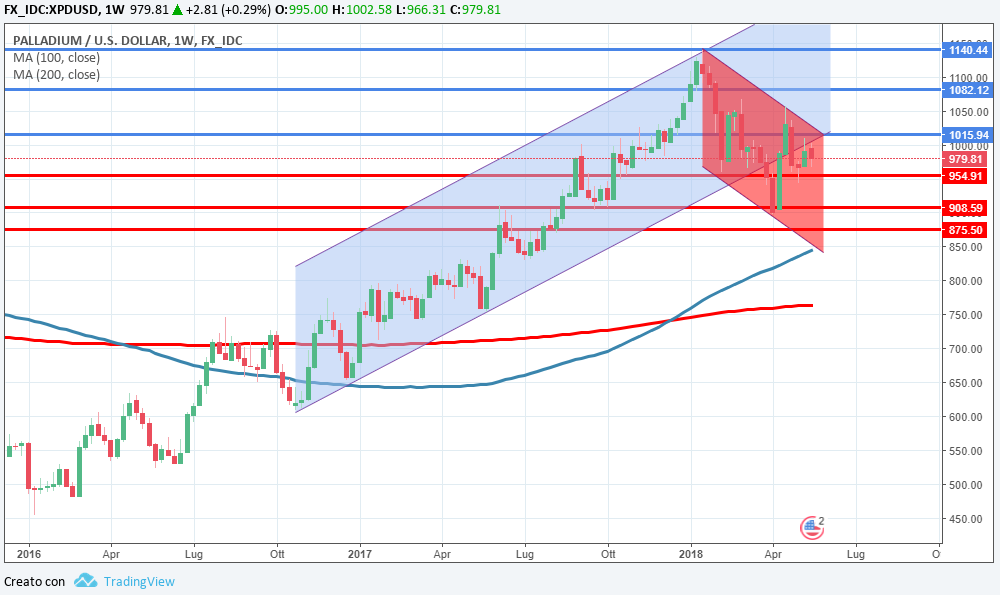 Eurodollar in fall and at the lows since last December. The single currency discounts the European political uncertainty due to the Italian government led by M5S and Lega still looking for a prime minister. Currently, the exchange rate is just under 1.8 with the US dollar and seems to be directed to the test of strong support placed in the area 1.1750 first and 1.16 then. However, it remains above the weekly mobile averages at 100 and 200. The outlook has further deteriorated compared to the last week and the trend moves from being moderately bullish to be neutral. 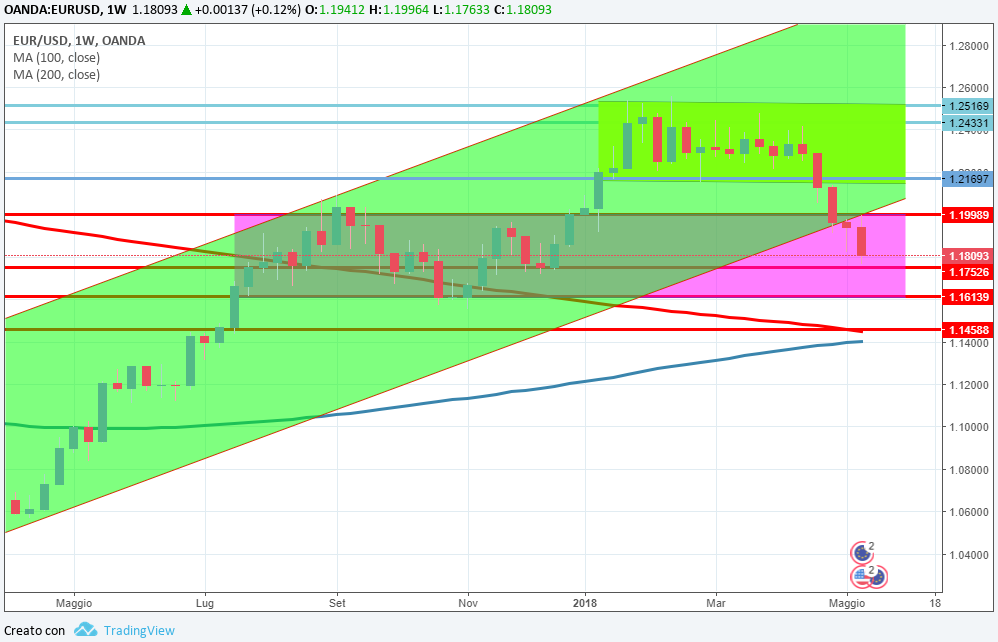