The war, commercial or not it is always a war and not always who fights follows a code of honor. And was the missed respect of this rule that makes Mario Draghi disappointed during the press conference of the BCE held on Thursday afternoon, Italian time. The object of the content was the strength of the Euro, at the maximum despite the dollar from 3 years (it oscillates at 1,25) despite the QE is still in process. "They send messages to

weaken the dollar" declared the number 1 of the Central Bank –affirming "on the changes they have to respect the agreement ." The recipients of the invective (even though not named) were the secretary of the American Treasure Steven Mnuchin and the president Trump.

The above-mentioned agreement are referring to the "prohibition", addressed to the monetary authorities to weaken is own currency with the purpose to benefit the exports. Prohibition, only formal, that has not practically been respected evidently by the Trump administration since the first day when the new roommate went to the White House. 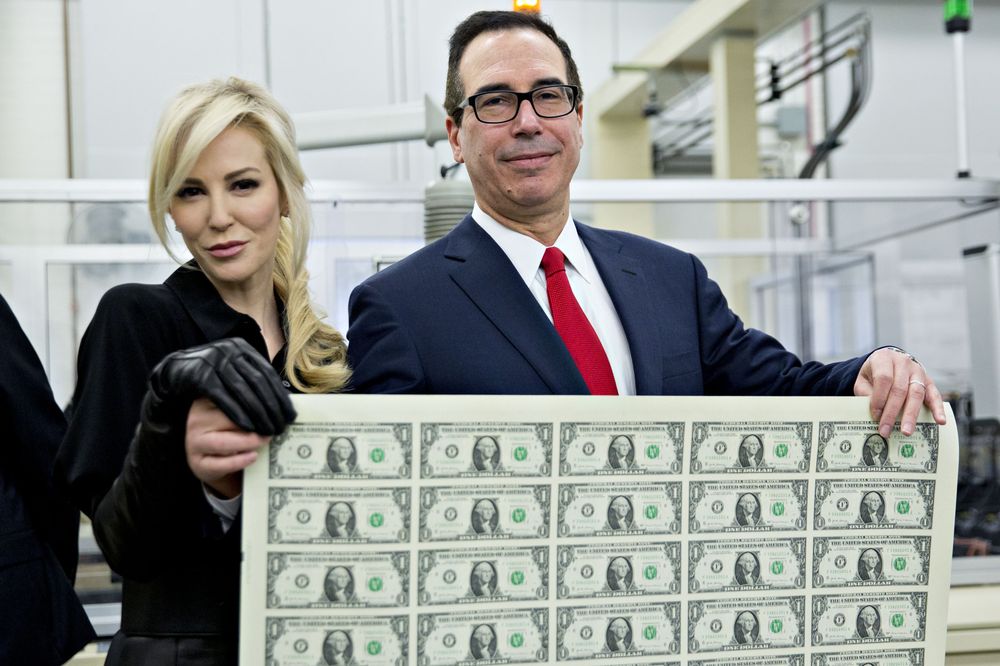 The last "low hit" of this monetary war has been on Wednesday during the summit of Davos from Mnuchin, which has confirmed that the weak dollar is well seen cause is favorable to the American exporting industries. The green ticket, already close to the collapse, is subsequently dropped making more strength the euro.

Nothing neither the efforts of Draghi that during the press conference has tried to appear more peaceful than usual. The unique currency has kept on earning ground on the dollar touching a maximum of 1,25375. Trump has finally tried to calm the situation on Thursday when he sustained that the words of the Secretary have been decontextualize causing a bounce of the green ticket, which strength in comparison to the principal currencies is near to the levels of September 2015. Many analyst sustain that such weakness - it is due to both to the protectionist politics of the new administration, and to the fact that the three rises of the anticipated rates in 2018 have been already pricing from the market.

Nevertheless, turning upside-down the perspective, there are also some positive aspects: the row materials (but also actions and obligations) named in dollars result more convenient if you purchase in Euro and the recent rallies (particularly on the jewels although the trend concerns different asset class) seem to confirm such phenomenon. Currently the change could try to push to quota 1.30. Reached this level a following strong correction won't be unlikely with all the above-mentioned consequences. 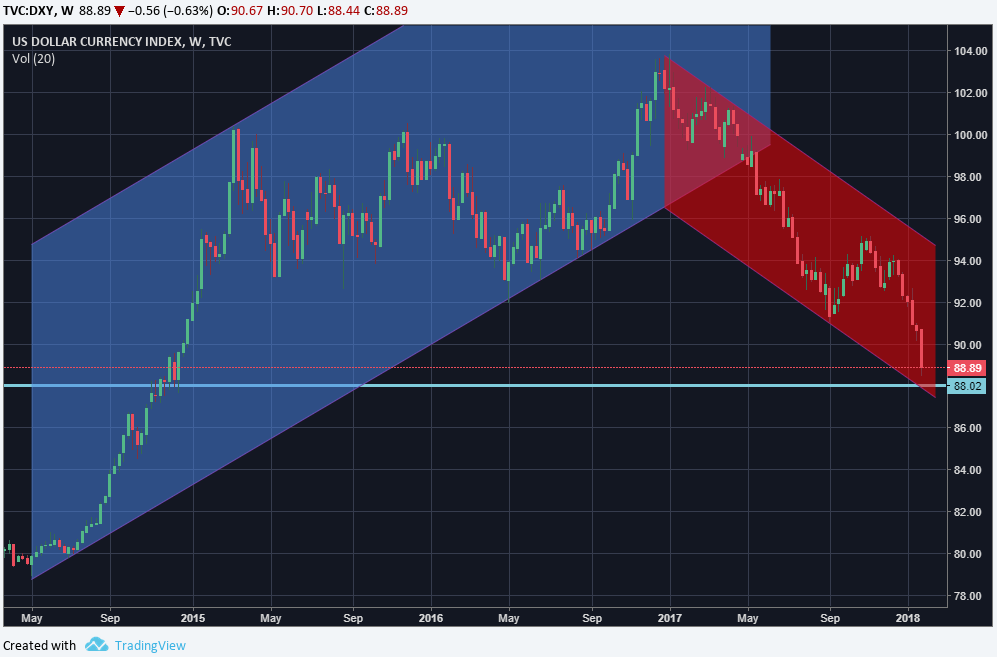 Broken down the wall of the 1345 dollars per ounces, the yellow metal, during the week, has pushed to a test of the maximum relative around quota 1365 $. The principal driver keeps on being the dollar in relationship to which the gold is moving in a opposite way. On Thursday Trump’s affirmations (concerning a presumed strengthening of the green ticket)have been enough to close different positions to the investors making to lose in this way around 20 dollars in a brief time lapse. If the run had to continue upward, the next obstacle is found at around 1375 $ /oz.s The supports (in the graph beloved ) are instead at 1345-1350, and subsequently at 1320 and 1300-1305 $ /oz.s. 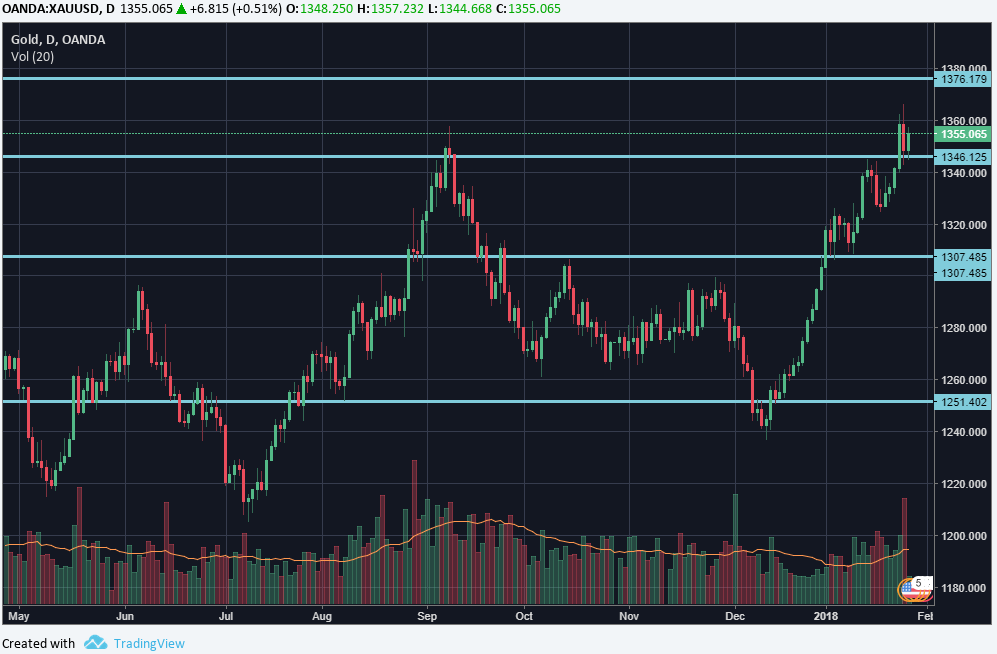 On the weekly graph the outlook of long term still positive. The area 1350-1375 have to be observed with attention. A further rush toward the up could verify him previous breakup to the rise, in the next weeks, of such area (with increasing volumes). 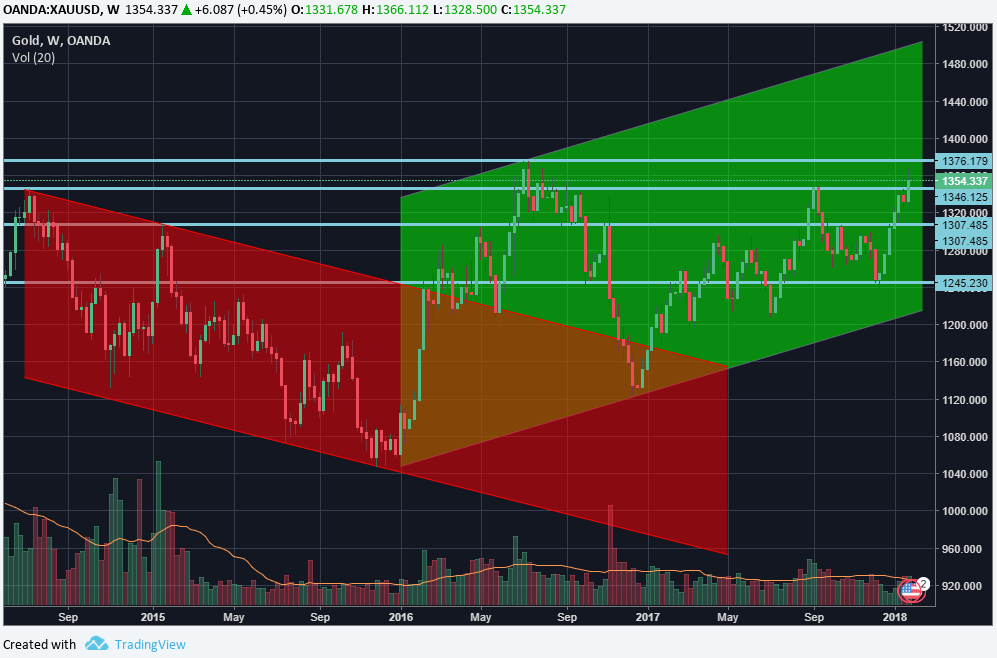 The silver this week has broken down the channel bear that held the price under pression from last June. The outlook of long term, nevertheless, is substantially unchanged: the price is in a side range which have as a support 15,50 dollars and as a resistance the 18,50.As already affirmed in the last report the dynamics of question and offer doesn’t seem to be particularly favorable to bait further rushes and consequent breakup to the rise. As for the gold, the principal driver to take under control is the dollar. 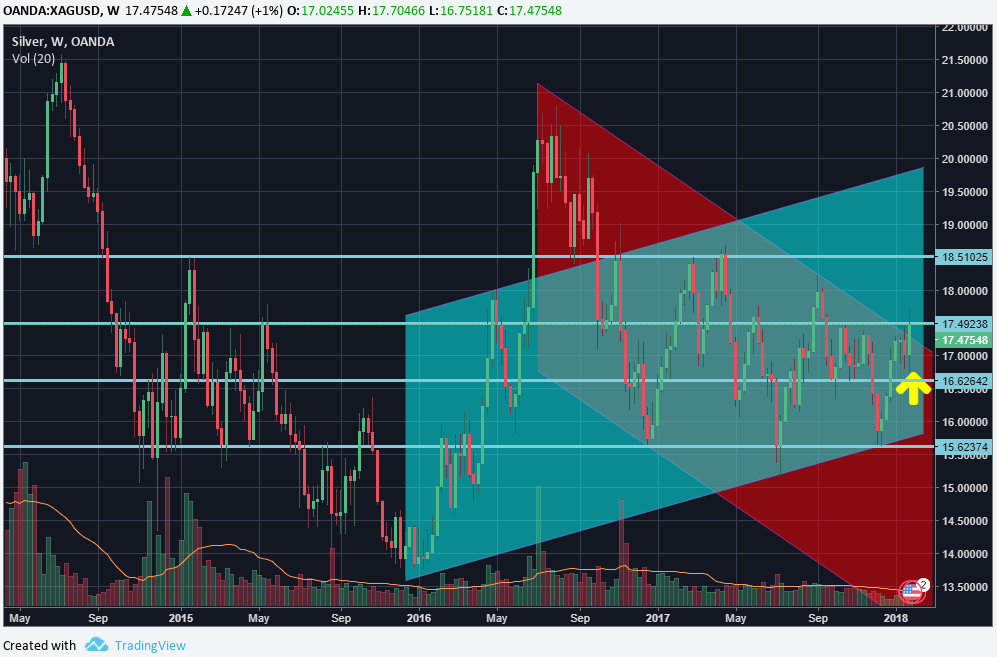 The metal is living a situation very similar to the silver. Finally gone out from a long channel bear, the platinum it is now found at the superior extreme of a side range that contains the price in a range of around 100 dollars (area 900 -1000 $). Nevertheless the volumes seem increasing : such circumstance could feed the purchase pushing the price above the threshold at 1050 dollars. The spread with the palladium is now reduced to 50 dollars. 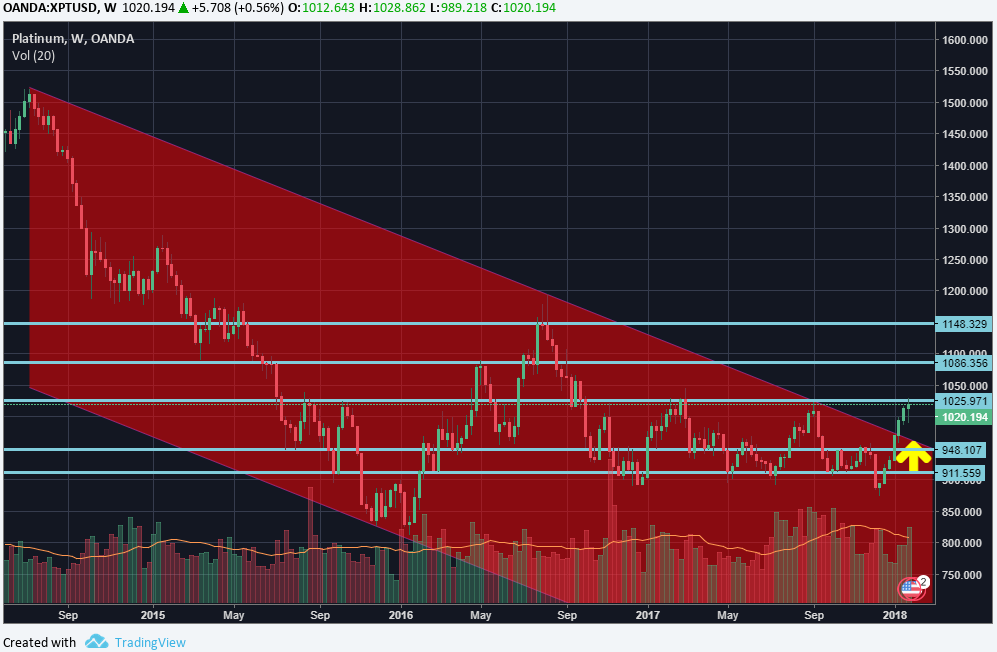 Second week in red for the palladium, after the recent rally which have continues for 5 weeks. The price of the metal is in a phase of consolidation now and is close to the 1100 dollars per ounces (support of brief term). The strong question and the weakness of the dollar have pushed the quotations until to today. Nevertheless the data which came from by the american society Edmunds on the american market of the auto(among the greatest consumers in palladium) marked this month a strong bending in the sales (-30% in comparison to December 2017; -1,4% in comparison to January 2017). The nearest supports, in the case of a correction to the rebate (baited by a smaller expansion of the auto industry) they are found to 1000 dollars and subsequently to 910 $ /oz.s The outlook is positive. 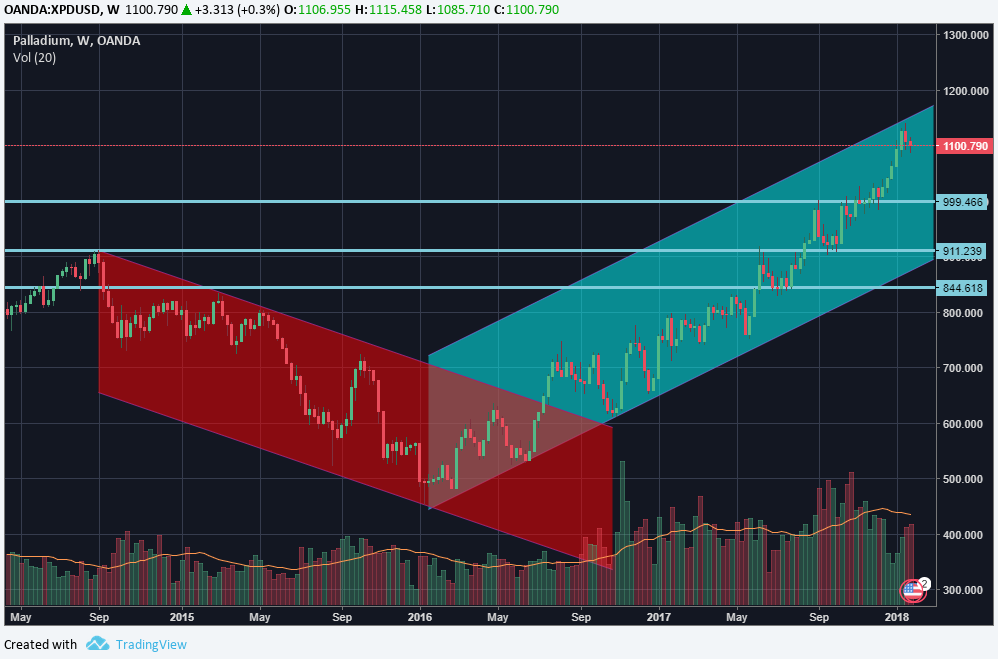 The unique coin continues to gain ground instead of the dollar. This week the Euro went at 1,25 level that doesn’t seen since 3 years. As already said above, the currency is sustained above all by the weakness of the dollar. The next levels key are found at 1,27 and 1,30. To weaken the change could enter some political factors as for instance the Italian elections in the month of March. It is not to exclude a correction of a certain importance to get closer to the exit poll , especially in the case in which the parties more

euroscepticism (it Ties North and Movement 5 Stars) earn ground in the surveys. 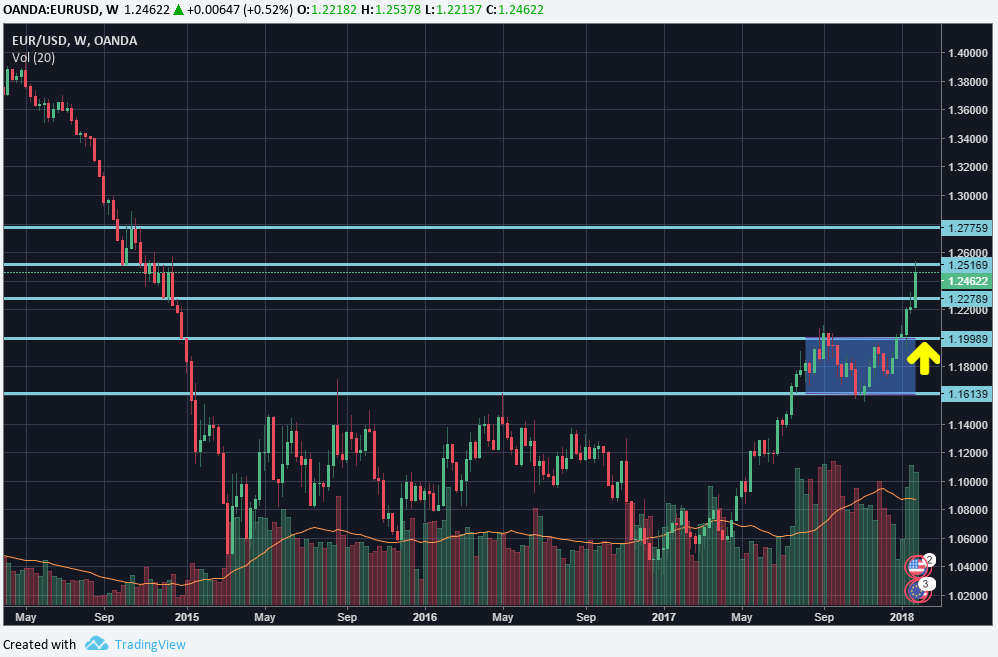