It is a substantially reassuring picture the ones made by the International Monetary Fund in its World Economic Outlook about the global economy. The growth, although there are some grey areas, appears to be more stable than in the past year and should remain strong even in 2018 thanks to the synchronicity of the upward phase that concerns both advanced and emerging economies. In particular, the Monetary Fund estimates global growth of 3.6% for the current year and 3.7% for 2018.Good also for Italy, whose prospects - although not particularly exciting - however, appears less gloomy than the previous semesters (a growth of 1.5% in 2017 and of 1.1% in 2018 is expected).

At the European level it has been reconfirmed Germany as the driving locomotive, which will record a + 2% this year and a + 1.8% next year. France and Spain, as well as the rest of the euro zone, also excluded Great Britain (whose economy is seen as limping by the IMF because of Brexit).

Overseas, and according to the data provided, the health of the United States I appears practically unexceptionable (excellent data on employment and good prospects for businesses thanks to the tax reform now close to being implemented). Beijing keeps on see a strong growth (although in a slightly decrease than in the past), while India this year records record numbers thanks to an increase close to 7%. Accomplice of these numbers is certainly the low level of inflation and a more than accommodative monetary policy (with interest rates close to zero).

Concerning the year 2018, will be decisive for the growth according to the Credit Suisse analysts, , investment spending by companies, which in recent years has remained slightly subdued,. These could include "the positive effects of tax cuts and partial fiscal easing, particularly in the United States and Germany".

On the other hand, there are undoubtedly some factors that could weaken the solidity of growth on a global level. First of all, the reduction of liquidity by central banks. In October, the Federal Reserve has begun , the budget reduction program is already being implemented, although it is destined to last several years before its completion. To this, however, are added interest rate hikes (the next will be expected on Wednesday, December 13) that, if poorly calibrated, could lead to serious enough unwanted effects thus undermining the prospects rosy illustrated by the IMF. On the other hand, other central banks could shortly align themselves with American monetary policy, not only by reducing liquidity injections (as is the case with the ECB) but also by raising the cost of money. In the coming months the picture will undoubtedly become less accommodating and the unknown will be represented by the speed with which the change of policy will take place: too frequent increases would result in an excessive cooling of the economy (ie lower production and lower consumption); while too slight increases could, on the contrary, lead to a surge in inflation. 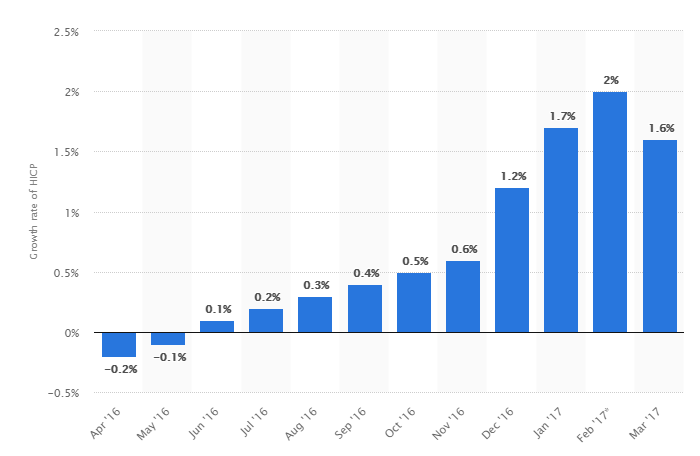 Everything will therefore depend on the equilibrium qualities that will be able to show the central banks, combined with a certain flexibility according to the various changes in the economic situation.

Last but not least, there are several political and geopolitical nodes on the horizon that are gradually raising more and more concern. In fact, if in Europe the negotiations for Brexit appear to be about to begin, in the Middle East and in the East a solution to the conflicts (both those present and those in the future) is far away. Saudi Arabia and Iran (with their respective allies) are increasingly at loggerheads; the North Korean nuclear threat continues to loom and the specter of a new Israeli-Palestinian conflict is around the corner, especially after Trump's decision to recognize Jerusalem as the capital of the Jewish state. 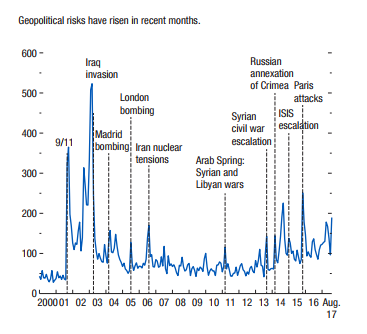 For the aforementioned reasons, precious metals, gold over all, will most likely continue to keep current prices (and beyond) even in 2018. In fact, despite a stronger dollar is expected pushed by other 3-4 increases in interest rates from part of the Fed, UBS estimates an average of $ 1285 an ounce (with possible peaks at $ 1365 / oz). The same opinion Bank of America-Merrill Lynch, whose analysts predict an average yellow metal price around $ 1325 / oz. Of similar opinion as well UBP, which sees an average price of $ 1,300 / oz.

Finally, the prices of raw materials must be taken into account: oil and gas (above all) have maintained relatively low levels thanks to an excess of production driven more or less directly by the low cost of money. However, as interest rates rise closer and closer, the cards on the table could suddenly change and upset the current balance in this way. 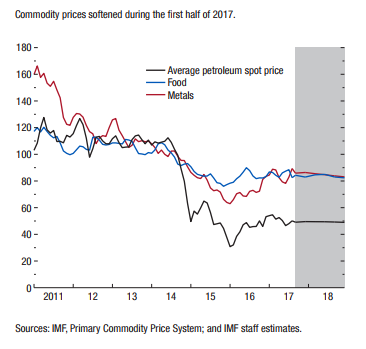 The consensus is therefore almost unanimous: the economy improves, but on the horizon there are several risks that, at any moment, could precipitate the situation.

On the price lists, the current year, now nearing its end, was a record year. Global growth figures have improved compared to 2016. These, combined with moderate inflation and low commodity prices (as well as an accommodative monetary policy) have continuously pushed up stock indices. The Standard & Poor's 500 is about to close 2017 at around 2700 points and the German counterpart DAX over 13,000. A race that has not (at the moment) been affected by the geopolitical events in progress and that has seen the operators buy whenever there has been a downturn, albeit a minor one. At the same time, this habituation led to a flattening of volatility: the most representative index in this sense, the VIX, collected an important number of closures around 10 points, a very low value that indicates both the poor movement on the markets and the high risk propensity on the part of operators. 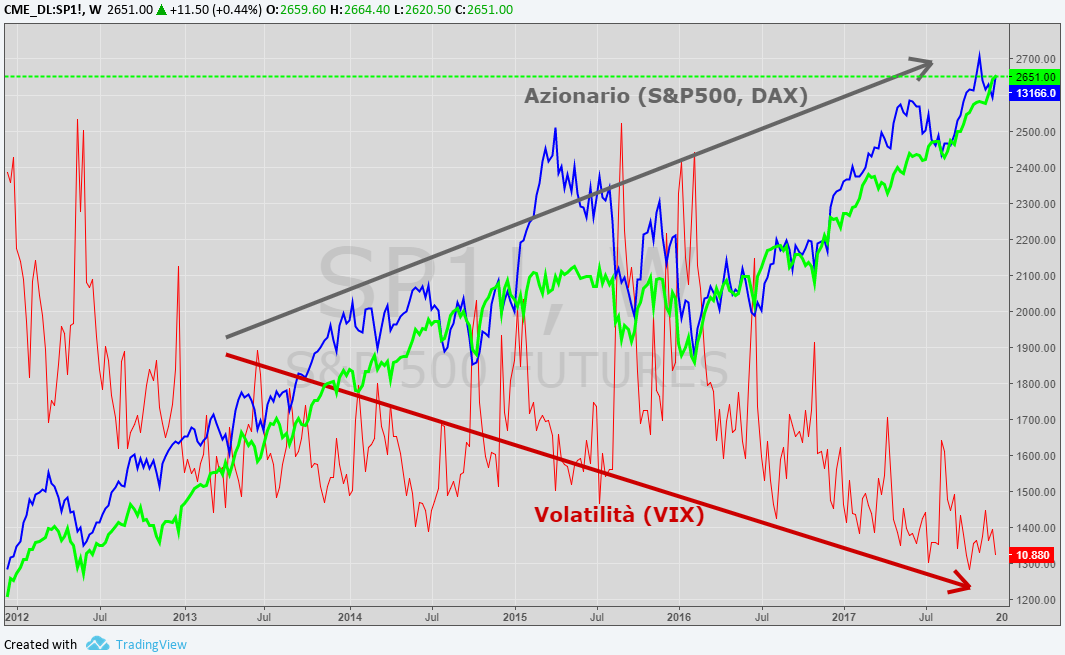 The yellow metal has defended itself well throughout the course of 2017, undergoing only a small débâcle at the end of the year. The gains from January to December are still very respectable, equal to about + 8%. The barrier represented by $ 1300 an ounce continued to be a tough psychological resistance to be broken down. At present, the appetite for risk is still high on the part of operators, and at the moment there do not seem to be signs indicating a change of course. In addition, the FED recently opened the door for a further rate hike (scheduled for Wednesday, December 11th): this is reason enough to trigger further sales on valuables. The price is currently below both the 100-day moving average and the 200-one moving average with a first support in the area of ​​1240 - 1245 $ / oz. Subsequently the second landing point could be represented by the round figure (1200 $) and then in the area 1180 - 1185 $ / oz (annual lows). 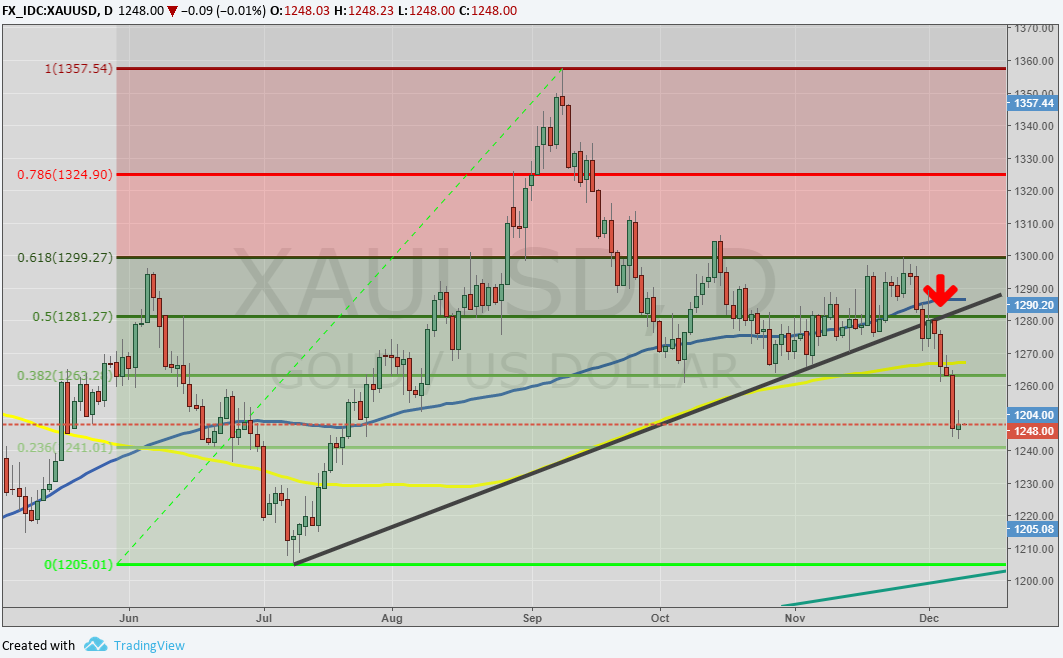 Expanding the horizons, however, we can note that on the weekly chart the general picture, although deteriorated compared to previous weeks, remains moderately positive. The upward trendline has so far supported the price (see chart below). Even the long-term outlook remains positive especially as long as the price remains above 1230 $ / oz. 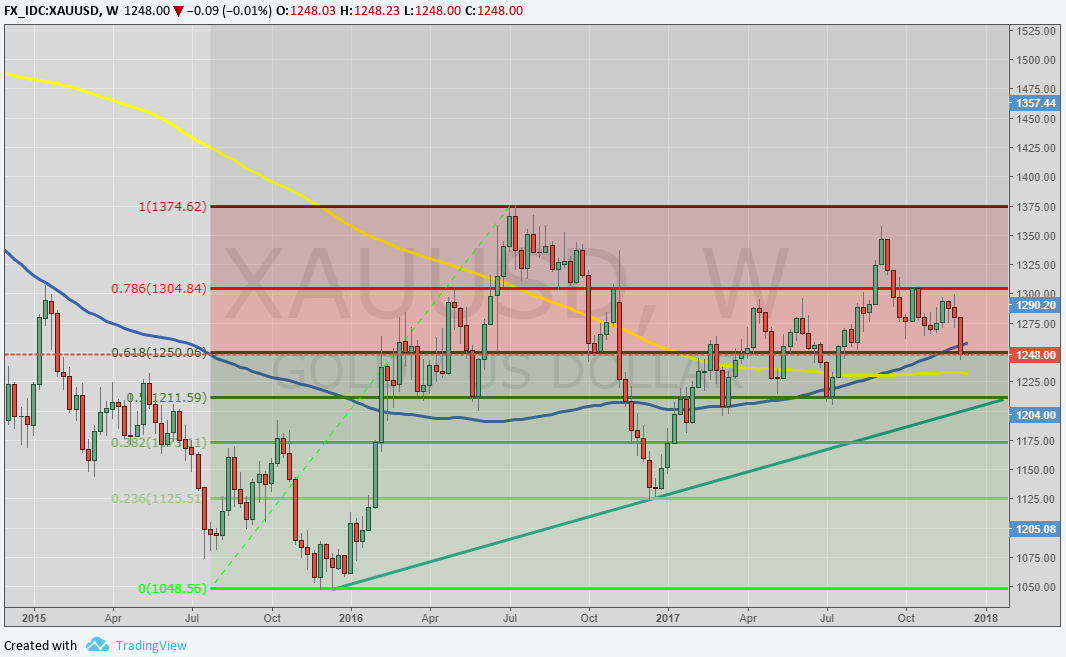 Even silver, like gold, was the object - especially at the end of the year - of strong sales that pushed the price close to the lows of July. Recall that from the point of view of fundamentals the picture (unlike gold, platinum and especially palladium) is not optimal: production is close to record levels and the demand is constantly decreasing. The price is well below the 100 and 200 day moving averages. Strong support also at 16.50 - 16.60 $ / oz (January and July lows). The most important resistance, in the case of rebound, is now at 17.30 $ / oz and roughly coincides with the intersection of weekly mobile averages at 100 and 200 days (yellow line and blue line). If quotations continue to decline, support remains at 16.30 - 16.10 dollars an ounce. The outlook, if the fundamentals remain unchanged, is neutral-negative. 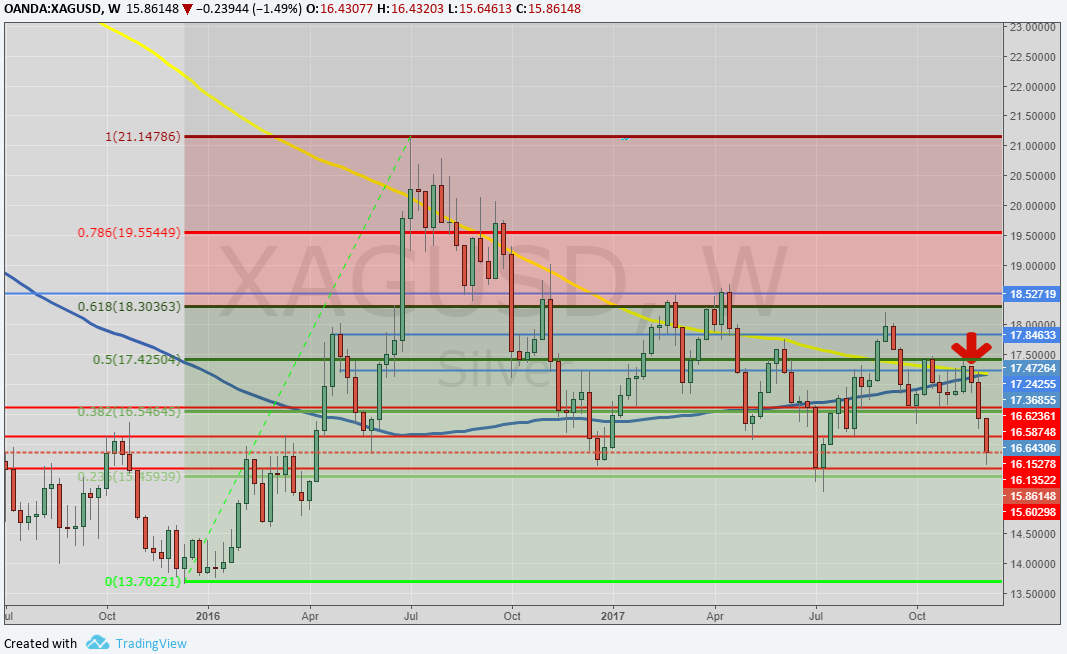 The metal, after trying to jump above $ 950 / oz is once again pushed down and is preparing to close the year in negative territory. Currently in the $ 950 area we find the 100-day weekly moving average that acts as a strong resistance. Given the relatively low prices, the interest of manufacturers in the automotive sector (remember that metal is used in the production of catalysts for diesel cars) could start to occur because, with appropriate modifications, platinum also lends itself to being used for catalysts of petrol cars. Given the strong differential with palladium, the hypothesis cannot be ruled out. However, the general trend remains neutral. Downwards the first strong support is placed in the $ 810 / oz area. To the top the first obstacles meet in area 904-910 $ / oz. Finally we find the recent highs in the area 930 - 950 $ / oz. 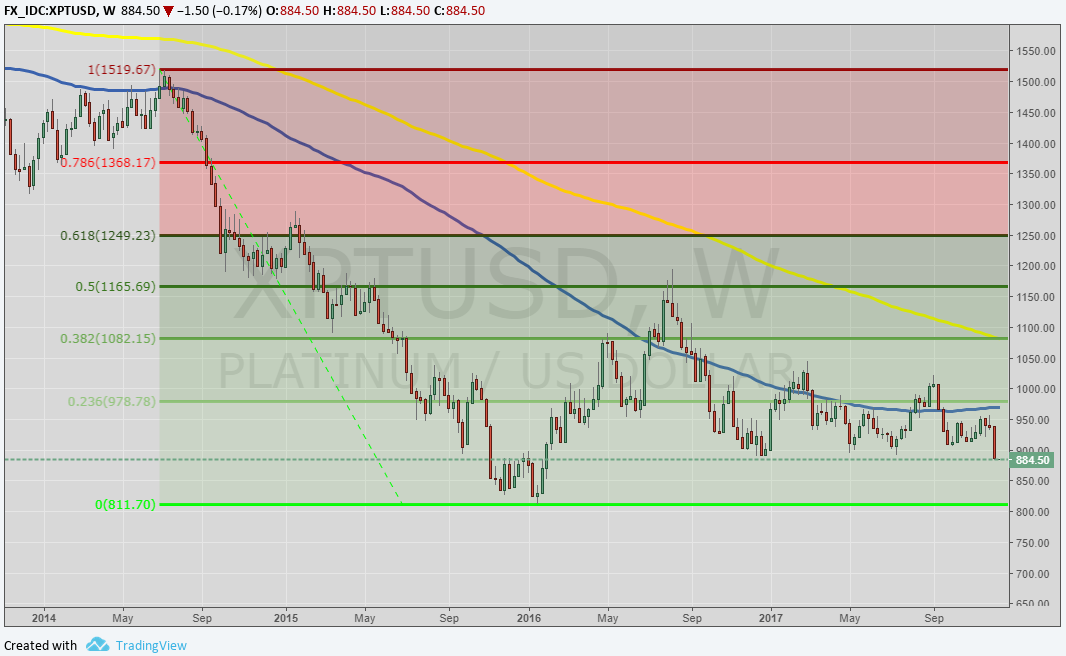 Palladium closed the second year in a row with strong gains as prices have more than doubled since January 2016. The metal is in a lateral phase - bullish and continues to remain above $ 1,000 an ounce. However, the rally begins to show the first signs of fatigue: a small correction could therefore be healthy. The fundamentals are more than good: demand (driven by car manufacturers) continues to exceed supply. The former resistance to $ 1,000 (but more generally the area around 980) continues to provide good support for quotations. The next one is in the area of $ 950 / oz and then in the $ 900 / oz area. The outlook remains positive in the short to medium term given that the price is firmly above both the moving averages (100 and 200 days). 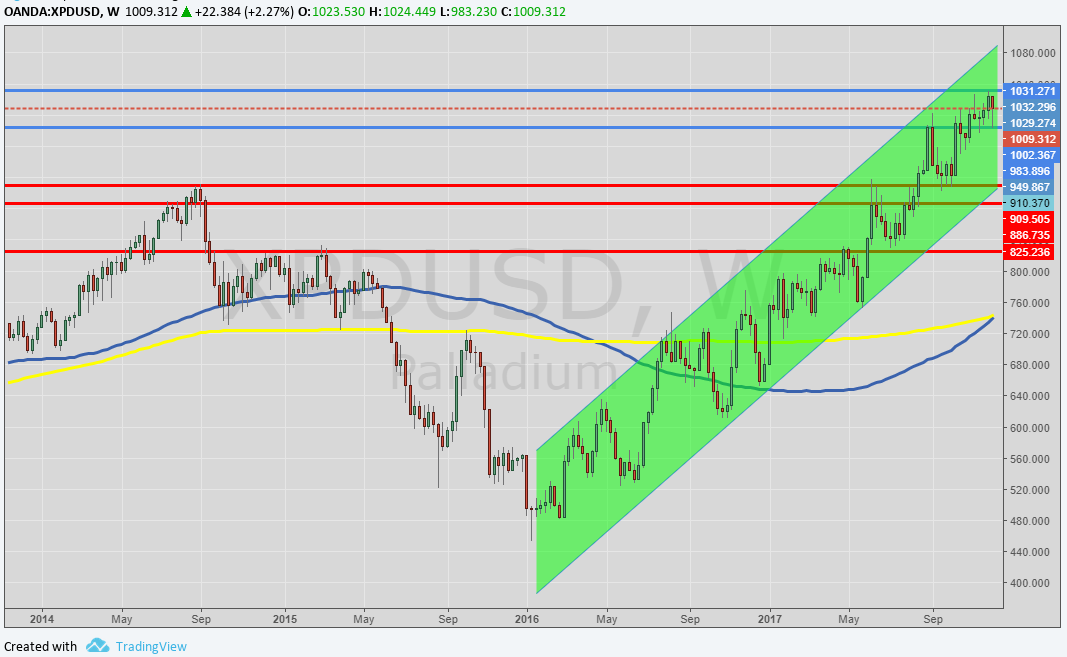 After the minimum of the beginning of the year during which the single currency seemed destined for parity with the dollar, the pawns on the monetary chessboard have changed. The greenback has gradually weakened (also for wanting not too veiled by the Trump government) while the euro has consistently strengthened coming out unscathed by numerous elections that could have seriously jeopardized the fate of Europe. In addition, the ECB's end-of-the-line quantitative easing rumors followed throughout the year, which offered further fuel to the bullish momentum.

At the moment the mini-rally seems to have been - at the moment - arrested. However, for 2018, interest rates will be weighed in both Europe and overseas and what the market has already priced in the exchange. The resistance in the 1.1950 area continues to reject the quotations. Nonetheless, a correction in US equity markets could trigger further purchases on the euro (and consequent rush to the precious and Japanese yen). According to several analysts, a 1.25 change is not so far a hypothesis. 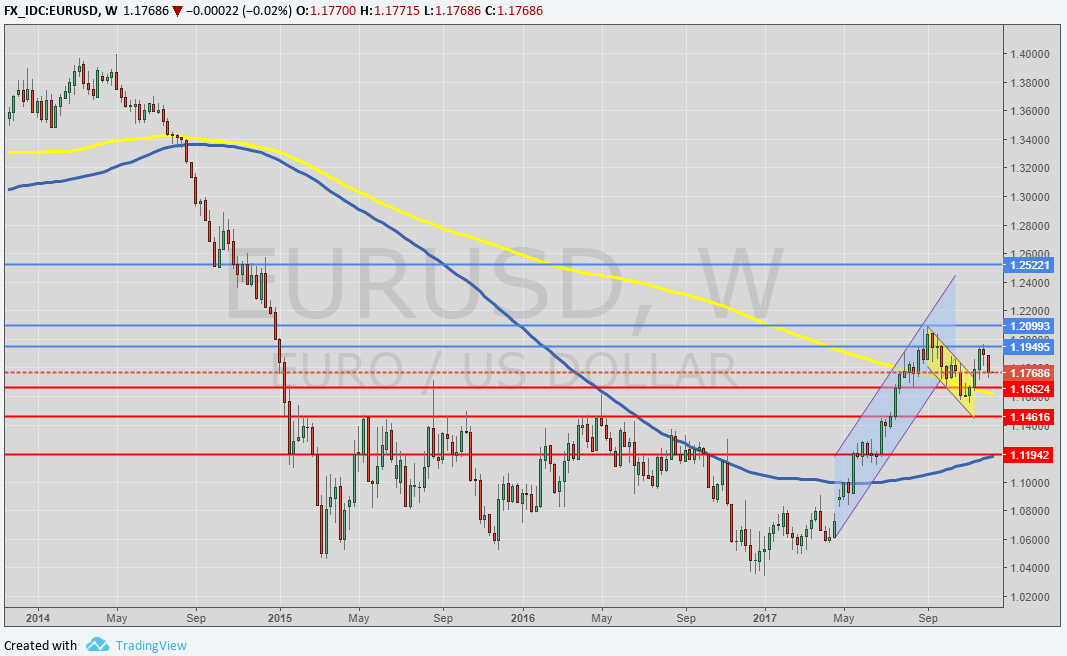 Italpreziosi S.p.a. does not guarantee any results related to information, publications made and present in the news, or assumes no responsibility for the outcome of any financial operations performed by the user.

The user expressly declares that he understands that access to the information on the site does not represent a solicitation to buy or sell financial products and that any resulting operational decisions are taken in full decision-making autonomy and at their own risk.

By virtue of these terms of use, no responsibility will be incurred by Italpreziosi S.p.a. for losses, damages or lost and / or lower earnings that the reader would suffer as a result of the execution of operations carried out on the basis of reading the news.